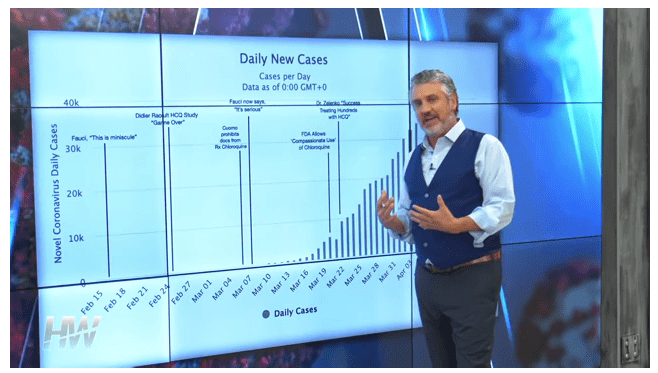 Above is a breaking video from Highwire News. You need to share this with everyone!

It is beginning to look like there was a criminal conspiracy to mass murder millions for the sake of creating a pretext to enrich Bill Gates’s worldwide mass Vaccine project.

I say, a criminal conspiracy to mass murder, because as this video shows, since 2005 the medical experts of the world knew that Chloroquine was an effective treatment for SARS viruses, but national governments ignored this and are still ignoring this to allow 10s of thousands to die.

I say, a conspiracy, because at the Event 201, organized by the John Hopkins Center for Health Security in November, their hypothetical pandemic was a SARS virus. Yet they staged a panic response scenario which did not include Chloroquine as a cure. That is malpractice and it shows prejudice against known medical evidence for the effectiveness of Chloroquine.

By staging this Event 201 they prepared the narrative for panic, to get everyone to think THERE WAS NO KNOWN CURE.

I sense there was an agreement between the Bill and Melinda Gates Foundation and all national leaders, the WHO etc., to ignore Chloroquine. Because without a cure, you have a crisis.

11 thoughts on “Governments knew about Chloroquine cure but rejected it, to maximize deaths”