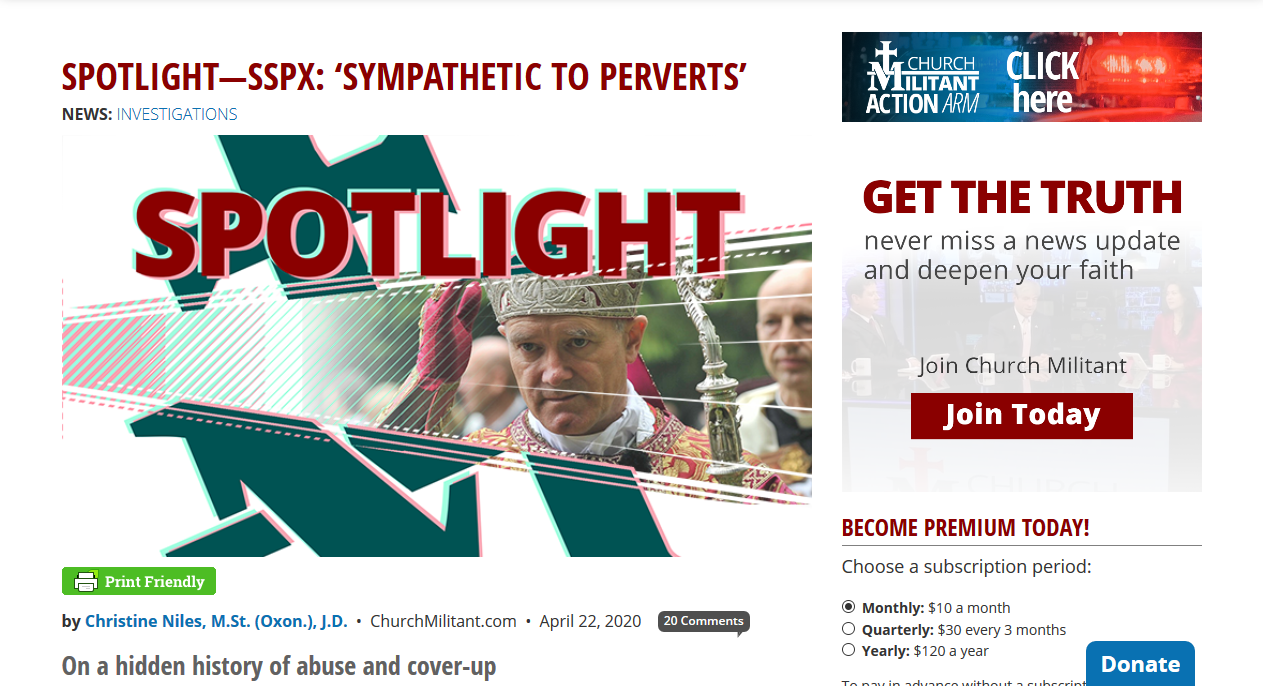 Church Militant has published today an exposé of pedophilia in the Society of Saint Pius X. FromRome.Info is publishing a notice about this report, because regardless of the good work of many of its members, the report shows how the Society has acted in a manner no different that other Lavender Mafia infiltrated organizations.

Church Militant reports there is a state wide probe in Kansas, USA, for pedophilia, involving as many as eight priests of the SSPX.

Strangely, the pedophilia and the fascination with Adolf Hitler has association in this case, in a manner similar to the St. Gallen Mafia and the Rampolla Faction in the Church.

This report sheds light on why the SSPX might be so strong in affirming that Bergoglio is the pope. It names some of the most prominent members and participating in the cover-up.

The transcript of their Video report, begins thus:

February 18, 2000. A single shot rings out, shattering the nighttime silence of Topeka, Kansas.

A young man lies dead. Next to his body, a suicide note — the last known thought of 26-year-old Michael Gonzalez — before he pulled the trigger.

In the note: the reason for ending his life, tracing back more than 10 years.

Jassy Jacas: “It’s a bigger betrayal that the SSPX has chosen to handle these cases like this.”

It turns out Michael’s life and story is just one among many stories of vulnerable kids , preyed upon — and covered up — by an organization bent on hiding the truth.

All hidden by a controversial society of Catholic priests, proving itself no different from scores of other dioceses it looks down on — all while draping itself in the pomp of traditional Catholicism, covering over a network of lies, spanning continents — and now the focus of a nearly year-long criminal investigation, details that have been shared with Church Militant for months.

Father Ramon Angles, an influential priest in the SSPX — a breakaway Catholic sect with its own hierarchy and society of clergy throughout the world, adherents to the Traditional Latin Mass and largely rejecting the Church’s Second Vatican Council.

For the rest of the report go to Church Militant:

CREDITS: The Featured Image above is a screenshot of the article cited above, just as the citation of the transcript.

26 thoughts on “EXPLOSIVE! — A History of pedophilia in SSPX throughout the world”