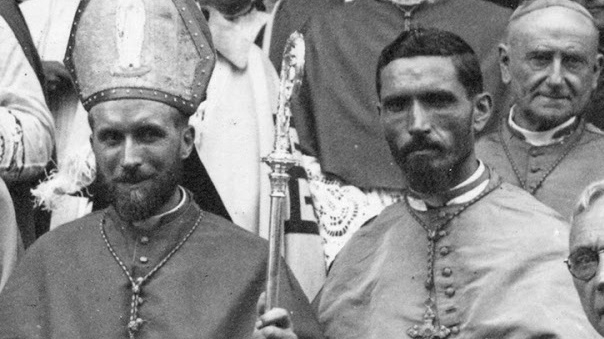 The report by Church Militant on pedophilia in the Society of Saint Pius X, founded by Archbishop Marcel Lefebfve will undoubtedly lead to further revelations. As one who was personally instrumental in exposing the unusual happenings at the Academy in Scranton, Philadelphia, nearly 20 years ago, which led to the exposure of many individuals associated with the school and the Fraternity of Saint Peter as well as the Society of Saint John’s founder (ex-SSPX) and other members as pedophiles, I have had misgivings at the strange behavior of the Society of Saint Pius X, which were confirmed by Church Militant’s report. Being a firm defender of children from pedophiles, and having personally canonically and civilly denounced priests on both sides of the Atlantic, I consider it my duty here at FromRome.Info to encourage others to do the same.

In times of grave risk to the Catholic community, revealing what one knows is not a sin at all, but a work of justice which is as necessary as it is to uncover the conspiracy, the existence of which is already publicly known, from the Church Militant report. So now is the time for everyone to speak up. And you will merit from Jesus Christ for doing so. Just remember, that the failings of individuals does not cancel out the good that they or others have done, even if it puts in grave doubt the morals of the institution to which they belong, an institution, which in this case, is not recognized by the Church, perhaps unjustly but perhaps not.

Here is my report, then.

In around the year 2000, I had the occasion to visit Kansas, USA. And during my visit, my host, who was a former Franciscan priest, took me to Saint Mary’s, Kansas. I will never forget the dark and forboding sense I got when we entered the principal Church of the Society there. Later, having discovered that someone in the rectory of my host was using the computer to access homosexual websites, I fled back to the home of my relatives in New England.

The year later, after spending some months visiting Arkansas, I was befriended by a devout Catholic couple who offered me a free ride to Florida, to attend mass with Father Pulvermacher, OFM. Cap. who served at a SSPX chapel there. I asked Father why he had not founded a traditional Capuchin Monastery under the SSPX. He said that he had been asking for permission for many years, but was always given by Bishop Fellay the same response: you need to ask the District Superior in the U.S.A.. But the District superior never gave him permission.  I and Father Pulvermacher agreed this was a strange form of subterfuge.

It was then that another devout Catholic couple gave me a ride to their ranch in Quebec, where I had occasion to visit the SSPX center on the south side of the St. Laurent River, just outside of Quebec City. There I was witness to a most disturbing event. As I had to use the bathroom, I was told to go to the School building, and to the an upper floor — I do not remember exactly which — where the men’s bathroom was. When I came out of the toilet, and went to use the sink, a little boy of about 10 years old greeted me courteously, and then turned around, away from me, and bent over, and remained in that position as if waiting for me to do something. I asked him what he was doing, and he said the priests taught him to do this. I was horrified. He was not expected to be beaten, but I feared what he was expecting, and so I ran out of the building and reported it to my hosts.

In the fall of that same year, I attended on occasion a SSPX Mass near Foxboro, USA. I was surprised one day that a priest from Arkansas said the mass, instead of the SSPX priest. My contacts in Arkansas warned me that this priest was accused of pedophilia, so I duly warned the SSPX District Superior in the U.S.A. Some weeks later, I received from his office a copy of a letter he sent to the SSPX superior in Connecticut denouncing me and warning the SSPX regional superior to keep a watch out for me as a “calumniator”. I was shocked at this response, and wondered who sent me a copy of the District Superior’s Letter, on official stationary. So I sent it to Bishop Fellay in Switzerland along with a copy of my letter to the District Superior. After that, the times of the SSPX mass near me were changed, and I on two occasions, having biked 10 miles, found there was no mass when I was told there would be. After that, I got the message. But Bishop Fellay did transfer the District Superior to Australia, where he soon had no role in supervising others.

In 2005, I had occasion to visit the Dominicans of Avrille, France, who work with the SSPX. While searching for books by Saint Bonaventure, in their Library Annex building, behind the monastery, I met a Japanese man, who was very fearful, and who in secret struck up a conversation with me after the librarian had left. He told me how he had wanted to be a SSPX priest and had come from Japan with the hope of being taken into formation. But instead he was assigned for 2 years to a 5 star hotel estate in the country-side, at some unknown location, and made to work without pay. Only after repeated complaints and attempts to flee did he make it to Avrille. He said this Hotel where he worked was owned by the SSPX, and its clients were not SSPX faithful, but rather the rich and powerful of France. He said that there were many investment properties like this, owned by the SSPX, of which no one knew about. I advised him to flee back to Japan and have nothing more to do with the SSPX further.

So, now that the Church Militant has given their report, I can say that the modus operandi of the SSPX members reported in it, is very similar to that which I have observed. And the things I see fit the same patterns.

I am not the only one to see such strange things.  And so, for this reason, I want to publish the testimony of a highly reliable source, about the strange affair of Ocuituco, Mexico, which I received today. I have redacted the author’s name to protect against retribution.

In 2008, when I had not learned much about the SSPX still, I visited the town of Ocuituco, Cuernavaca, Mexico, in 2008 (at my own risk), even after the driver (who was Fr. Aguilar’s sacristan at St. John the Baptist Church in Yecapixtla, Morelos, whom I had been hosted by), had told me that the SSPX was running things in that town like a cult, better yet, like a cartel. For instance, women and their daughters were required to wear veils at all times in public. Men were to dress in a certain way also, even with the same colors (in uniform), like it was some sort of lay habit.

Roman Catholics who were not of the SSPX and were foreigners, were not welcomed in the town, and if they were seen visiting, they were stopped and questioned about what they were up to there. Often, some of the people who didn’t know about this, had their tires slashed, and were threatened by a herd of men who would surround their vehicles with guns and machetes.

According to Fr. Aguilar’s sacristan, the reason why the laity of the SSPX in the town had become so defensive, was because the SSPX priests who had arrived in that town to preach and teach, years ago, had riled up the people of the town, against the Bishop of Cuernavaca, Mexico, who at that time, was demanding that his Church properties be returned to his priests. The people went up in arms, and instead, they stole and took over the properties by force and since then, prevented the Bishop or even police officers, from interfering in the matters. This cult-like behavior is much like the Sunni’s and Shi’ites in Iran, or ISIS in Iraq and Phillippines, or the Boko Haram Islamic soldiers in Nigeria.

So, that was my first impression of the SSPX. Over the years, I’ve learned more, and I’ve come to understand that the SSPX operates in such a way, that the laity and even clergy, do not even know of some of these off-the-grid areas that the SSPX operates. Lay and clergy are kept in the dark and so you tell them this, and they cannot believe it. I always wondered what else have they gotten away with?

CREDITS: The Featured Image above is a photograph from 1947 of the future Archbishop Lefebfrve, on the left, and is used here in accord with a Creative Commons Share-Alike 4.0 International license, as described here.