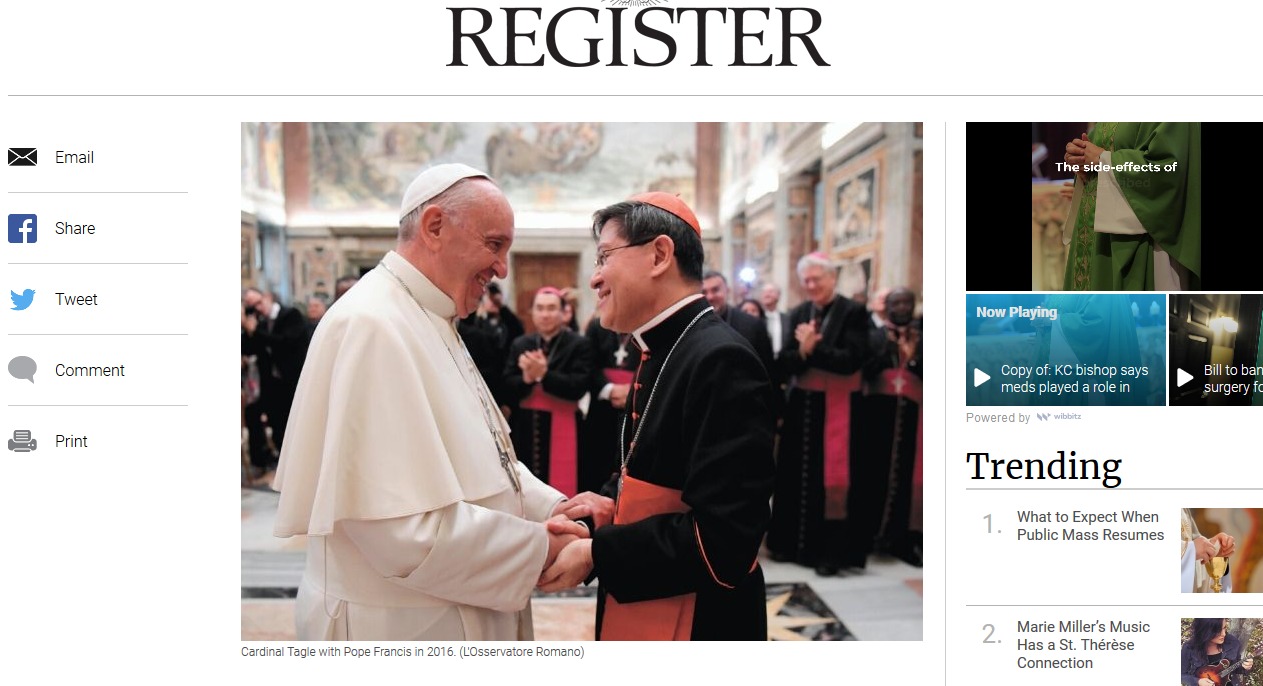 It was incredible that in 2018, Bergoglio made a secret agreement to surrender the Church in the Peoples’ Republic of China over to the government, actually commanding Catholics to hold communion with heretics and schismatics and to submit to them!

The shameful, cowardly and dishonest Cardinals and Bishops of the world remained silent and did not convene a Council to declare Bergoglio deposed for an act of horrible schism and sacrilege in such a betrayal.

So now it seems that he is eager to go all the way and give the Vatican to Peking.

And his instrument is the man who is increasingly appearing to be his chosen successor.

As has been revealed by the investigations of Fred Martinez at Catholic Monitor Blog, the newest Cardinal of the Bergoglian Church, Luis Antonio Tagle, has Chinese ancestry on both his father and mother’s side of the family. Moreover, he appears to have financial backing from Chinese banks. He speaks Chinese fluently. And in his personal politics he is a diehard Marxist.

As the National Catholic Register reports:

Pope Francis has raised Cardinal Luis Antonio Tagle to the rank of cardinal bishop in a new sign of his esteem for the former Archbishop of Manila.

The elevation caps a rapid rise for Cardinal Tagle, who only took up his new post in Rome this February.

He had previously served as the 32nd Archbishop of Manila from 2011 to 2020. He was a high-profile figure at the 2018 youth synod. A year later Pope Francis named him head of the powerful Congregation for the Evangelization of Peoples, replacing Cardinal Fernando Filoni.

But the complete silence of the Cardinals and Bishops, excepting Cardinal Zen, and the utter do nothingness of the hierarchy, raises a necessary question: how many Bishops and Cardinals have been bribed by the CCP to go along with the transfer of Church properties and power to Peking?

POSTCRIPT: Elizabeth Yore writes about the Vatican deal with China at Breitbart, today.

CREDITS: The Featured Image is a screen shot of the page of the report of the National Catholic Register (owned by EWTN) cited in the article above.

14 thoughts on “Is Bergoglio’s objective to surrender the Vatican to Peking?”