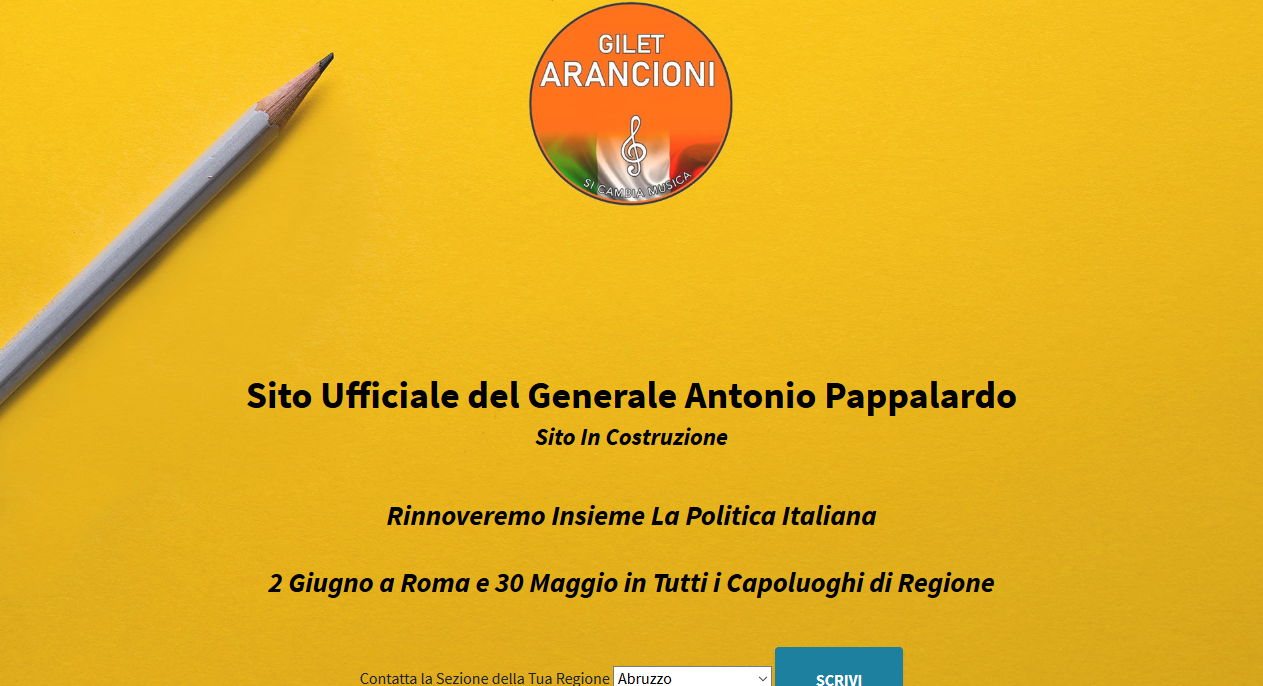 Gilet Arancioni, the Italian version of “Orange Vests”, on April 4, 2020, called for radical political change in Italy. Here is an English translation of their Manifesto:

The “Orange Vests” and “Liberation Italy” Movements, which are part of the Popular Spontaneous Movements, which do not identify with the current parties and movements in power, announce to the Italian People that the time has come to say “Enough to this Europe of bureaucrats and without democratic rules”.

We invite Italians at home and abroad to fight for:

1) the exit of Italy from this Europe;
2) the restoration of the political and monetary sovereignty of the Italian people, with the return to the Lira;
3) the reorganization of the Republican State with the objective of placing at the center the ITALIAN PEOPLE and not the financial, banking, insurance lobbies and many others that pursue only speculative intent against the weakest.

In addition to their Manifesto of April 4, 2020, the Gilet Arancioni have published their political platform or agenda. Here is an English translation:

The Orange Vests Movement was born spontaneously among the Italian people, from which it draws its life, without any political, economic, social and cultural conditioning. The color orange recalls the oranges of the SOUTH, which have become the symbolic protagonist in the new Italy to be founded. Our political project foresees radical transformations of the Italian State and its international relations.

1) Immediate expulsion of all irregular non-EU countries, regulation of integrated non-EU countries (decree appointing the Extraordinary Commissioner).
2) Creation of the SONFI (Società Nazionale per Finanziarie le Imprese), for the issue of State Guaranteed Bonds (OGS) on the national market to finance development (decree appointing the Extraordinary Commissioner for the Economy).
3) Creation of a Banca Libera Italica (BLI) for the payment of capital to entrepreneurs and workers
4) Establishment of the Lira Italica on a free-use basis
5) Allocation of 1,000 Italian lira to each head of household resident in Italy
(6) Control of public expenditure, control of shareholdings, elimination of waste, verification of the documentation necessary for the application for Community funds (appointment of the Commissioner)
7) Computerization of the whole Italian Nation
8) Defense of “Made in Italy”” for typical products and for their excellence, especially in agriculture and craftsmanship.
9) Referendum for the constitution of the Co-federal Republic, based on six Co-federate States (Great North, Great Centre, Great South, Great Sicily, Great Sardinia)
10) Quality certification, certifying for the State, for each Region and for each Municipality the quality of the work carried out by each official or manager, in order not to waste resources and energy.
11) Abatement of state, regional and municipal bureaucracy
12) Review of the structure of the State, to minimize inefficiencies and shortcomings
13) Lowering of taxes, especially those concerning waste, water, electricity and gas consumption and health care costs
14) Free distribution of a certain amount of water, natural goods
15) Reorganization of the Public Security Administration and reduction of the Police Force
16) Fight against political corruption, through the establishment of inter-force police units reporting to the Provincial Prosecutors’ Offices of the Court of Auditors;
17) Construction of “Social Assistance Houses” (CAS) for the eradication of poverty in the territory of the State;
18) Elimination of Family Houses and full and complete home care for children and the elderly
19) Realization of “Itineraries for qualified tourism”, with the collaboration of tour operators, trained in schools of specialization
20)Labor market: total revision of the tax system, to free resources for investment and, therefore, create jobs. Implementation of international business policies to induce foreign companies to invest in Italy.
21) Opening of all shipyards, the rehabilitation of earthquake-prone areas, reconstruction of the road surface, safety of all schools, renovation of hotels and restaurants.
22) Prohibition of awarding contracts and subcontracting to firms which do not have their registered office in the territory of the State
23) Introduction of Home Restaurant to reduce unemployment
24) Total revision of education, supporting our young people also in master courses abroad. Excellent remuneration for teachers with up-to-date school curricula geared to the current needs of the labor market
25) Full recognition of medical freedom in the field of alternative medicine, both as an exercise and as university course of instruction
26) Establishment of a Committee of doctors, impartial and not conditioned by the pharmaceutical companies, which will have to make a judgment, based on indisputable scientific data, on the usefulness of vaccines within 30 days
27) Organization of an effective prevention system with home care, especially for children and the elderly; adoption of measures for the maximum efficiency of first aid and hospital facilities, regulation of agreements with private clinics, imposition of short time limits for clinical analyses
28) Launching a research study to curb cancer
29) Launching a study to curb viral outbreaks
30) Use of ad hoc instrumentation to protect Italians from excessive electromagnetic radiation, currently in use (mobile phones, TV, Radio, systems, etc.) in household and workplace electronicas (microwave ovens, refrigerators, washing machines, phono, etc.).
31) Creation of Italy as a Country of Peace and an Ecological Garden, with a new Environmental Protection Code, with the establishment of an Extraordinary Commissioner
(32) Establishment of the State Environmental Guard, under the authority of the Minister of the Environment for Civil Protection and Protection of the Environment
33) WHEREAS all living things have a soul, including plants, establishment of a Regional Department for the Protection and Conservation of Animals and Plants
34) Start of construction of a high-speed railway line from Rome to Palermo
(35) Launch of the ‘Zero Unemployment Project’ (attached decree)
36) Give a strong boost to economic activities for the recovery of production capacity, building, in training and specialization schools, professional skills and regulating industrial activities
37) Appointment of the Extraordinary Commissioner for the fight against Ecomafia, with adoption of the system of total waste recycling through ‘molecular dissociation’.
38) Support for families with disabilities;
39) Support of 4 Guardian Angels to each citizen: Neighbourhood policeman, Doctor, Ecological Operator, Social Worker, who will intervene at the request of each citizen through a 24-hour emergency telephone number (family tele-assistance) and through the implementation of the PIT (Pronto Intervento Tempestivo) programm;
40) Recovery of the Christian faith and identity values of the Italian People, through the development of specific social and cultural activities
41) Establishment of “Academies of Fine Arts” in each Region, within “City of Art”, to be realized with rooms and mini apartments for artists from all over the world, to prepare and specialize young people to all artistic activities (music, singing, dancing, painting, sculpture, cinema, etc.).
42) Creation of the Sports Promotion Office in Italy, to give further impetus to sports activities in the region in every sector, both athletics and team sports, such as football, beach volleyball, handball, water polo, basketball, etc..
43) Abolition of the Automobile Tax Stamp, in accord with the judgment of the Court of Cassazione
44) Requirement of producing household appliances which are more efficient (refrigerators, washing machines, dishwashers, etc.), for the reduction of consumption and the amounts of electricity bills;
45) Free distribution of books to students up to the first two years of high school, with return of deposit at the end of the school year.