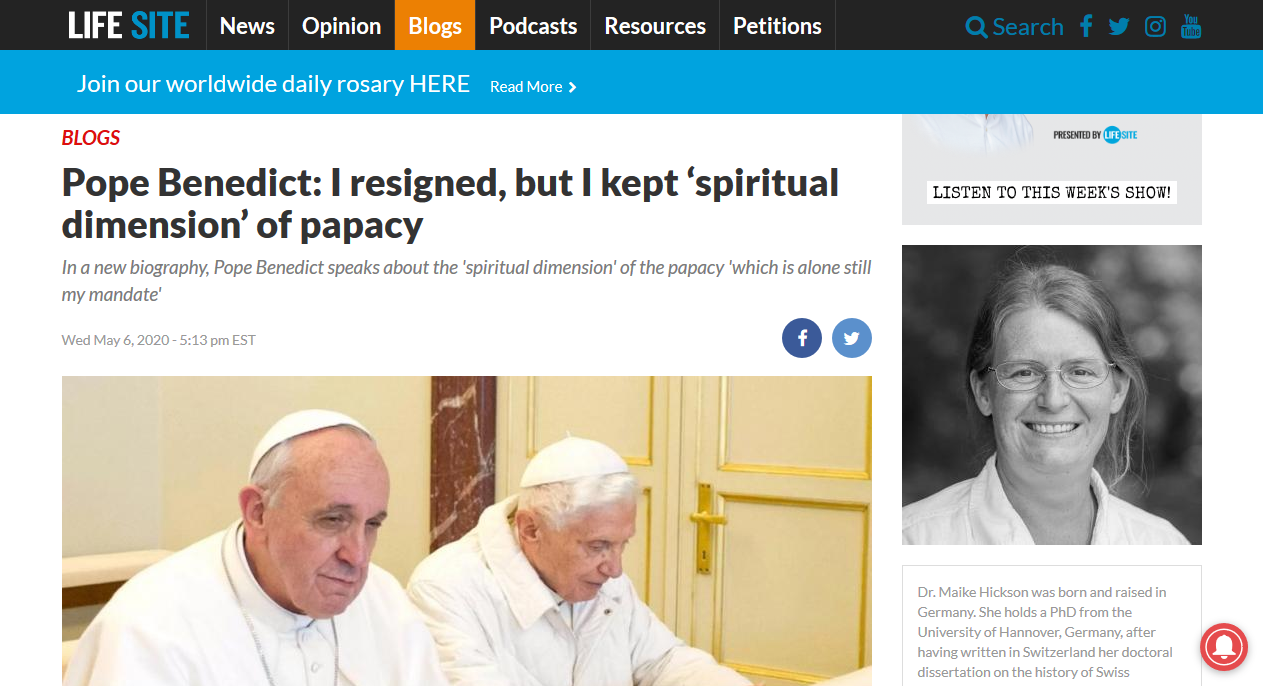 Following my article yesterday, on May, 6, 2020, which sustained that Peter Seewald’s new Biography of Pope Benedict XVI demonstrated that Benedict XVI is still the pope, because his renunciation was vitiated by substantial error, LifeSite News published a very fine article by Maike Hickson, entitled, “Pope Benedict: I resigned but I kept ‘spiritual dimension’ of papacy”.

Praise is deserved where praise is due. And it has been a long time since LifeSite News or Hickson confronted the problem without any polemics: that is, without any push to interpret the facts one way or another.

Here is the meat of her article:

It is here that Pope Benedict then draws a comparison with the papacy. For, such a retired bishop, he adds, “does not anymore actively have an episcopal seat, but, still finds himself in a special relationship of a former bishop to his seat.” This retired bishop, however, thereby “does not become a second bishop of his diocese,” explains Benedict. Such a bishop had “fully given up his office, yet the spiritual connection with his former seat was now being acknowledged, also as a legal quality.” This “new relationship with a seat” is “given as a reality, but lies outside of the concrete legal substance of the episcopal office.” At the same time, adds the retired Pope, the “spiritual connection” is being regarded as a “reality.”

“Thus,” he continues, “there are not two bishops, but one with a spiritual mandate, whose essence it is to serve his former diocese from within, from the Lord, by being present and available in prayer.”

“It is not conceivable why such a legal concept should not also be applied to the bishop of Rome,” Pope Benedict explicitly states, thus making it clear that according to his own ideas, he fully resigned his papal office while maintaining a “spiritual dimension” of his office.

At the end of her article she quotes Msgr. Nicola Bux who says that the Petrine Office contains 2 mandates, the spiritual and the visible, and that you cannot renounce just one of them and share that with someone else.

I am not sure what Hickson means by “mandate”, whether she has translated the German, Mandat, or the German, Verantvortung. (Hopefully, someone on Twitter will ask her and post her reply in a comment below.)  Regarding the papal mandate, it might be described in spiritual and visible terms, but it is only one. So Msgr. Bux is partly right and partly wrong.

But the Papal munus is the Verantvortung, or charge, and, as everyone knows, Benedict never renounced that.

It is important to note here, that Verantvortung, is often rendered as responsibility in English. And, in fact, as was shown by Dr. Edmund J. Mazza, here at FromRome.Info, in March, and as I explained the same day, in my commentary on his article, for Pope Benedict XVI it is clear that he never had the intention to renounce the spiritual responsibility of the petrine office, only the active ministry, and that thus, he remains pope.

LifeSite’s decision to turn off the polemics of “Bergoglio is certainly the pope” and “The Renunciation is certainly valid” marks, I hope, a watershed moment for LifeSite News.

All of us who remain or have returned to communion with Pope Benedict XVI want nothing other than that all come to the truth through knowing the facts.

Therefore, Maike Hickson and Lifesite News deserves high praise today. And I gladly give it.

In the future, I think the papal law on elections should require the Cardinals to give the newly elected a catechism lesson on what the papacy is, before asking him to accept it, because it is becoming increasingly likely that the truth is, that Cardinal Joseph Ratzinger did not know what he accepted the day he accepted his canonical election — And though that does not touch the validity of his accepting it, nevertheless, it does make it impossible for him to renounce it, because as I said in the documentary I produced recently, on the Renunciation, to renounce a thing, you have to know what you are renouncing, so that you name it.

Finally, perhaps I am being too hopeful for LifeSite News, because they recently changed their position and included sodomy as a Family-related issue, seemingly to placate the LGBT Movement, which is rejoicing over this change. So this article about Pope Benedict XVI might be neutral to a certain extent only to draw traffic to their site.

13 thoughts on “LifeSite news, on the threshold of returning to Pope Benedict XVI”