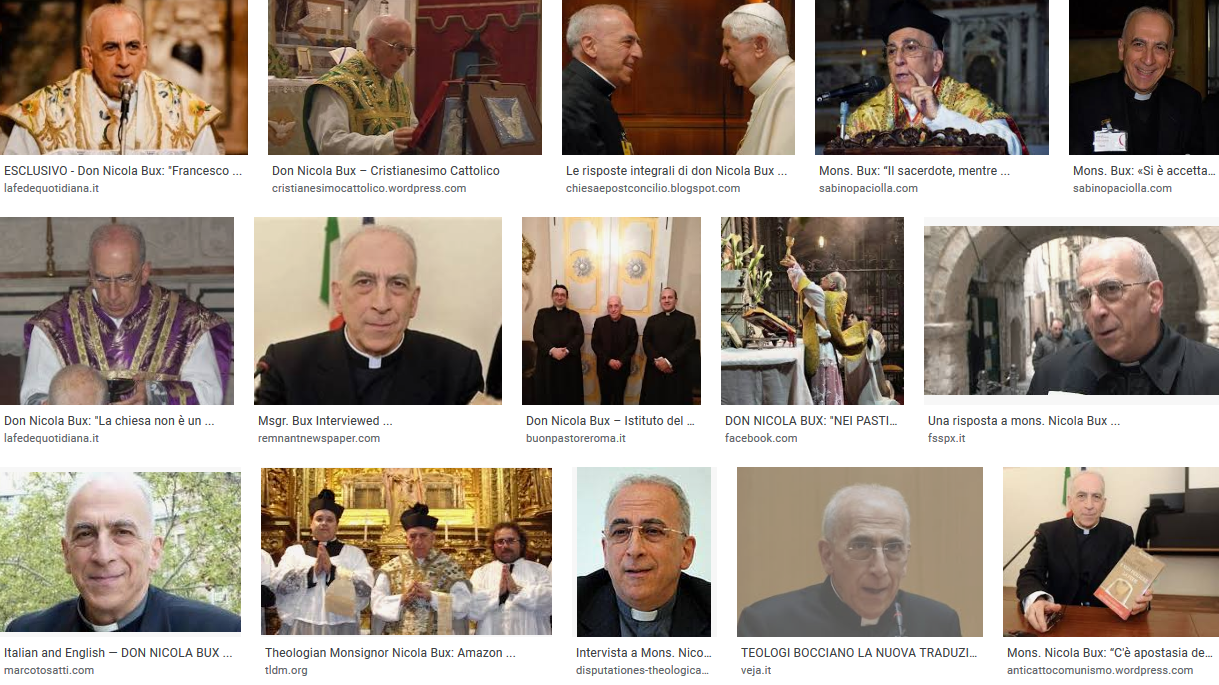 Denial in times of shock is a human experience and a frequent response, though not virtuous, when the truth of the pain, suffering or threat is so great it cannot be admitted to exist even in the mind. The denial is the escape.

But denial of the truth of reality and of the facts of history or law is simply wrong, and in a scholar it is glaringly dishonest.

Such is my amazement then at the comment attributed to Msgr. Nicola Bux, in the article of Aldo Maria Valli, entitled, Benedetto XVI: “Ho rinunciato, ma sono ancora papa sotto il profilo spirituale”, which was published yesterday, here in Italy.

Apart from the fact that the title of the article repeats in Italian the same exact title of Maike Hickson’s report at LifeSite News — a thing which in itself is a giornalistic faux pas if not unseemly — the article presents nothing new in respect to her article.  Valli is one of the leading journalists here in Italy, on national television. It is clear that he could have done better, in my opinion.

But the end of the article is the real insult to the intelligence of the reader. There, Valli writes:

If the person elected is not a bishop, continues, Msgr. Bux, he should be immediately consecrated a bishop because the Papacy requires the excercise of the episcopal office, but he is pope from the moment in which he assents to the election. “If the same person, at a certain point, declares to no longer be able to fulfill the call to be the Vicar of Christ on earth, he loses the papal office and returns to the conditions in which he was found before giving his consent to being the Vicar of Christ on earth”.

Valli is too professional a journalist to be suspected of having invented or distorted the words attributed to Msgr. Bux, which I have highlighted in red.

That being the case, I do not know what the Monsignor is trying to do, pull the wool over the heads of the entire Catholic world?  I say this because Bux has clearly rewritten Canon 332 §2, to mean that which Pope Benedict XVI did on February 11, 2013, when, on the contrary, Canon 332 §2, being a papal law, which according to Christ Jesus, Who is God, Eternal Truth, our Savior, and the only Head of the Church, declared to be bound in Heaven just as on earth, says something entirely different:

If it happen that the Roman Pontiff renounce his munus, there is required for validity that the renunciation be freely done and duly manifested, but not that it be accepted by anyone whomever.

Msgr. Bux obviously wants badly to accept the Renunciation as valid, but in doing so he has not only violated the final clause which says his acceptance does not make it valid, and the first clause which says that it happens when the Pope Renounces his petrine munus, not when he says, at any time, that he is no longer capable to fulfill the office.

Bux is in denial, and it is not one which arose out of fear. It is one which arises out of a malign desire to deny the truth.

I never paid attention to anything Bux said until the summer of 2012, when Pope Benedict XVI appointed Mueller to head the Congregation for the Doctrine of the Faith, and there immediately irrupted the shock and objections of the Catholic world, here in Italy, on account of Muellers speculation that Our Lady was not always a physical virgin, only a spiritual virgin, and that in the Sacrament of the Altar, Jesus is present in His Divine and Human Nature, but not with His hands and feet and heart.

It was then that Bux spoke in Mueller’s defense, even though the latter’s opinion regarding Our Lady was condemned in the Synod of the Church of Rome in the 7th century as heretical.

Bux, evidently, still has not learned when it is just better to remain silent.

As an aside, Msgr. Nicola Bux sustains that the Code of Canon Law needs to be changed to provide a canonical status for a pope emeritus, because he wants to hide the reality of what happened over the fig leaf of words. I am told this effort is currently in the works in the Roman Curia.

CREDITS: The Featured Image above is a screen shot of Google Images search for Nicola Bux, to show that it is a good search engine for finding images of the many faces of the Monsignor.