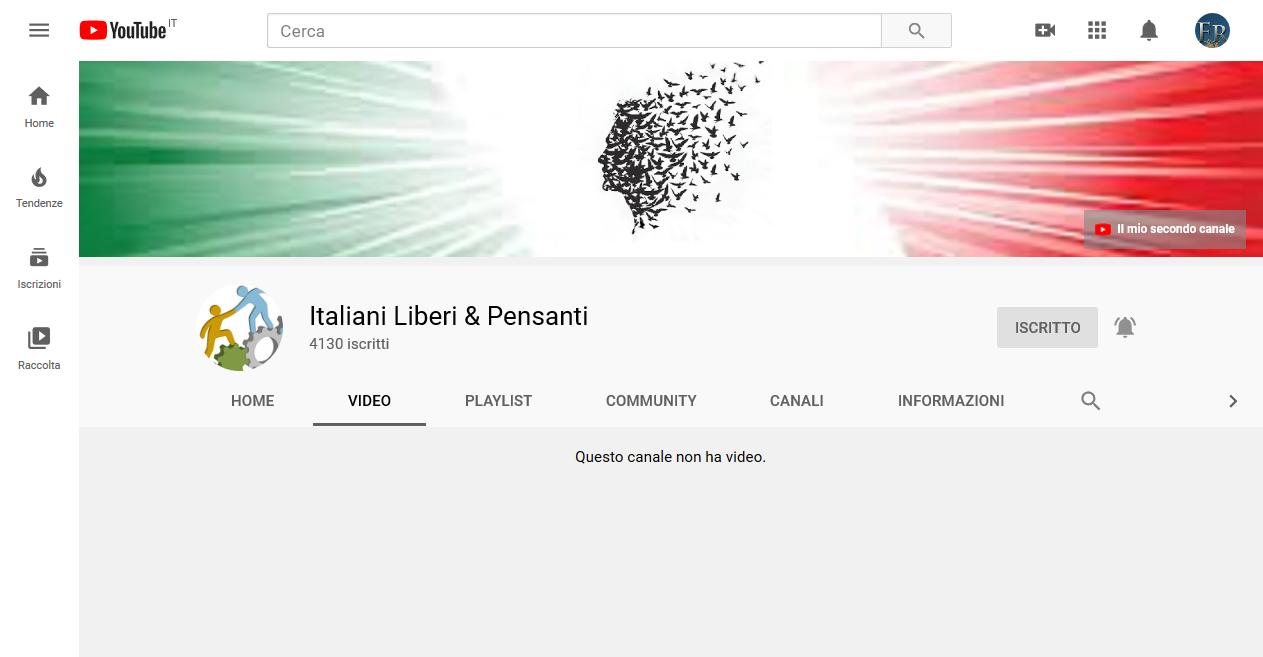 One of the YouTube channels for Italian politics, is Italiani Liberi & Pensanti. It featured short disquisitions on politics, liberty, constitutional law, the response of the Government of Giuseppe Conte to COVID-19 and recently appeals to support the initiative of General Pappalardo and the Gilet Arancioni (Orange Vests) Movement.

But today all the videos on that channel were erased.

The final message from the channel owner was: “Basta! Il canale è manipolato. Io non ci sta più!” —  Enough! The channel has been manipulated. I am no longer here.

The comment was attached as the title to one of three videos which were erased by YouTube as soon as they were uploaded. Now, all the videos have been erased.

The channel author has another channel at Lo Scudo di Cristo, but all the videos there are gone also.

As readers of FromRome.Info know, many of the videos which have been featured in posts here at FromRome.Info have disappeared from YouTube days, hours and even minutes after publication here on FromRome.Info. The Censorship is no longer hidden, rare or restricted, it has become a instant procedure and police of YouTube.com.

The author,  man who goes by the nick, Alex Gnosis, speaks in this video, of the banning of his previous channel, back in October 2019:

Where he opines that the banning is done by computers which detect which words are said and filter content on that basis. The motive is to domesticate dissidents to the narrative control of the globalists, by either forcing not to speak, or to take refuge to deserted platforms where no one will hear what they say, except for government agents. His decision back then was to set up another channel.

The apparent reason for this censorship, in addition to narrative control, is to silence the voices of those who do not have 10s of thousands of dollars to spend on renting a private server or retaining the services of a cloud to effectively distribute the videos they produce. It is in a sense both information warfare and class-warfare, combined with the psyop of disruption to harras and intimidate opponents of the Globalist lead world-wide coup d’etat against human rights which has been underway since February of this year.

Events like this simply confirm the wisdom that time spent on the next is wasted. True power for the people lies in local organization and in taking back control of their own towns, one by one.