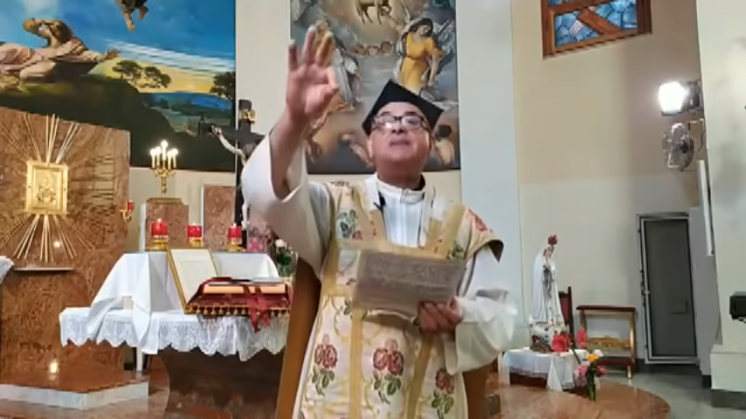 Recently FromRome.Info republished a video containing a truly heroic homily by a zealous Catholic Priest of the Diocese of Palermo, Sicily, by the name of Don Leonardo Ricotta (see here), who urged the faithful not to accept the Virus mass.

The Virus Mass is the popular term for the sacrilegious and heretical liturgy created to comply with the Corona Stunt and the Corona Hype, whereby Catholics accept that Jesus in the Most Blessed Sacrament is the occasion of infection and make themselves disposed to committing sacrileges to show servile devotion to their politically correct pastors instead of worshiping Jesus Christ as He desires and taught us, with the simple faith of children.

In response to Don Ricotta’s saintly discourse, the Bergoglian Bishop of Palermo has forced him out of his parish. Here is the Letter of Lorefice, the bishop who rides a bicycle in the cathedral — protege of the Rampolla faction in the Church. Lorefice is also the one who attempted to excommunicate Don Alessandro Minutella, also a pastor from Palermo, for simply stating the truth about Bergoglio, that is he a raving heretic.

The public announcement by the Chancery, as can be seen below, is a specious work of double-speak and shell games. By this it reveals that Don Ricotta is being persecuted by a gang of liars and heretics. Furthermore, one can surmise that the Archdiocese gave Don Ricotta an ultimatum, to be accepted or to resign, and that he chose to resign under duress.

OFFICIAL COMMUNIQUE OF THE ARCHDIOCESE OF PALERMO

As of May 21, 2020 the Rev. Don Leonardo Ricotta, Presbyter of the Church of Palermo, is no longer the Parish Priest of the Parish S. Agata V.M. in Villabate having himself renounced this office. It is therefore inaccurate or specious the news spread by some social channels that Don Leonardo Ricotta has been removed from the parish priest’s office by the Archbishop of Palermo.

Pending the appointment of the new parish priest, the Archdiocese of Palermo will identify a parish administrator in the coming days. In view of the controversy aroused by the socialites themselves, the opportunity is taken to clarify the following. The practice of distributing communion in the hands is in conformity with the norms issued by the Magisterium of the Church, to which every Catholic Christian must religiously pay heed to the will and intellect. The Congregation for Divine Worship, in the Instruction Redemptionis Sacramentum of 2004, no. 92, states that “If a communicant, in the regions where the conference of bishops, with the confirmation of the Apostolic See, has permitted it, wishes to receive the sacrament on his hand, the sacred host should be distributed to him”.

The Italian Episcopal Conference in the Instruction on Eucharistic Communion. Do this in memory of me, n. 1415, already since 1989 admits communion in the hands. Moreover, to celebrate the Eucharist exclusively with the Roman Rite according to John XXIII’s Missale Romanum of 1962, as an extraordinary form introduced by the Motu Proprio Summorum Pontificum, issued by Pope Benedict XVI in 2007, would exclude from participation in Mass the portion of the People of God who wish to take an active part in it according to the ordinary form of Paul VI’s Missal, currently in use. The right and freedom of a good part of the faithful would thus be seriously compromised. Personal convictions, therefore, presented by individuals as authentic doctrine, cannot be imposed on the faithful. It is up to the bishop in the diocese “to give norms in liturgical matters, to which all are bound”, “to defend the unity of the universal Church” and “to promote the discipline common to the whole Church” (Congregation for Divine Worship, Instruction Redemptionis Sacramentum, nn.176-177).

For more on this controversy, see Attorney Roberto De Petro’s Open Letter to Lorefice, which FromRome.Info published in the original Italian and an English translation, yesterday.

3 thoughts on “Bergoglian Overseer at Palermo forces Devout Pastor out”