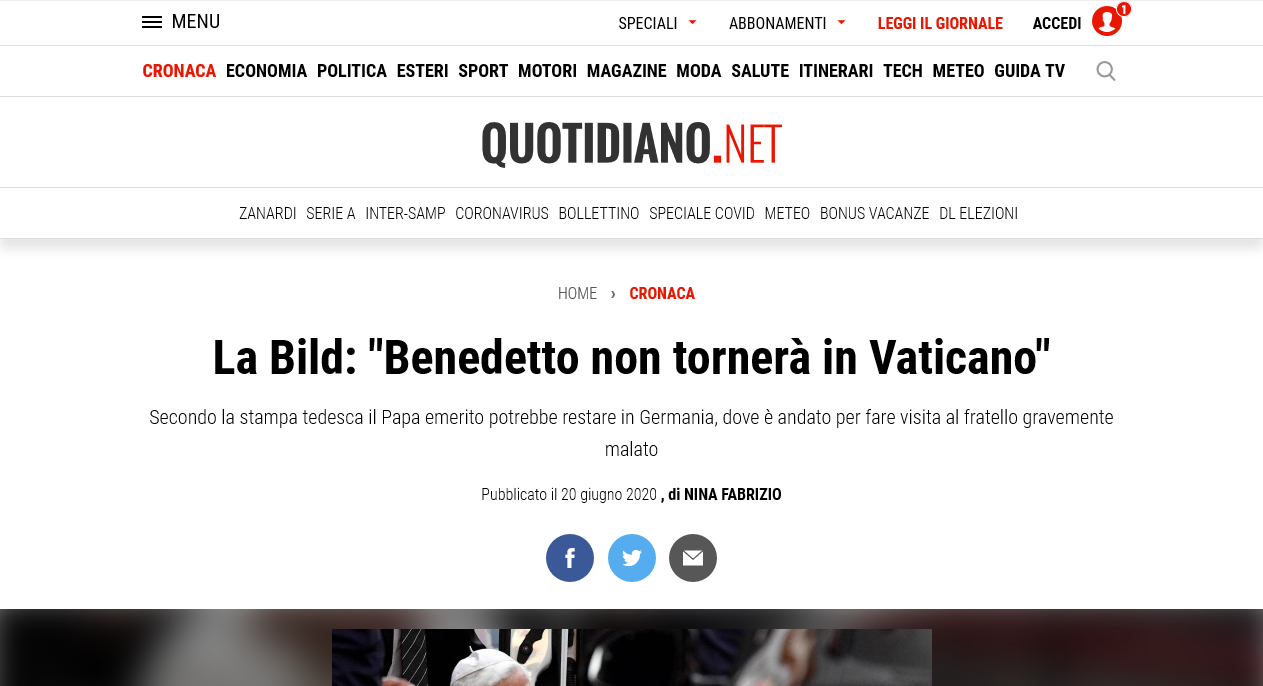 In an article entitled, La Bild: “Benedetto non tornerà in Vaticano”, Nina Fabrizio of the prestigious daily, Il Giornale, reported at their online site, Quotidiano.net, that the German press were reporting the likelihood that Pope Benedict XVI would not return to the Vatican ever.

Fabrizio’s report ran on June 20, 2020, the Saturday after the Pope’s first full day at Regensburg.

I report about this now, because as in all things at the Vatican, the precise historical sequence reveals what is really going on in the Vatican.

The Bild was criticized for exaggeration, notably by Seewald, the official biographer of Pope Benedict XVI, who called it “nonsense” but gave no explanation for his comments.

But the Diocese of Regensburg was the source for Bild’s report, since on the day after his arrival in Germany, the Diocese issued an official press release in which it was said that Pope Benedict had set no date for his return to the Vatican.

Here is an English translation of the official press release of the Diocese, published on June 19, but updated on Saturday June 20, at 17,00 AFTER the Apostolic Nuncio had arrived on the scene:

It’s a surprise visit to the hospital bed. Pope emeritus Benedict XVI flew from Rome to Bavaria this morning to be at the side of his seriously ill 96-year-old brother. It is perhaps the last time that the two brothers, Georg and Joseph Ratzinger, will see each other in this world.

The Diocese of Regensburg asks the public to leave this deeply personal encounter in its private setting. It is a heartfelt wish of the two elderly brothers and does not tolerate photos, public appearances or encounters that go beyond that. Please have understanding for this.

All people who wish to express their sympathy are cordially invited to say a silent prayer for the two brothers. Bless them.

The 93-year-old Pope emeritus landed in Munich on Thursday, June 18, at about 11:45 a.m. There, Bishop Rudolf Voderholzer welcomed him warmly and accompanied him on his onward journey to Regensburg. The pope emeritus lives in the seminary of the diocese of Regensburg. The date of his return journey is not yet fixed.

Benedict XVI is travelling in the company of his secretary, Archbishop Georg Gänswein, his doctor, his nurse and a religious woman. The Pope emeritus made the decision to travel to his brother in Regensburg at short notice, after consulting with Pope Francis.

Note that by “surprise visit”, the Diocese admits it was not informed beforehand, as would have been the duty of the Vatican Secretary of State to do. However, though this release was updated after the arrival of the Vatican Nuncio on Saturday it significantly still affirms that no date of return has been determined.

The Nuncio seems also to have been surprised by the visit, since it took him 2 days to arrive, when he should have been at the airport to greet Pope Benedict XVI.

However, within 18 hours, of the update of this Official Diocesan Press Release, the FaceBook page of the Diocese was announcing that the Pope would return to Rome on Monday!

So if there is anyone wondering where the confusion is coming from, it is pretty clear that it was not the German press nor the Italian press.

But only those with eyes to see, who want to see, can see it.

3 thoughts on “The Bild: Benedict will not return to the Vatican”