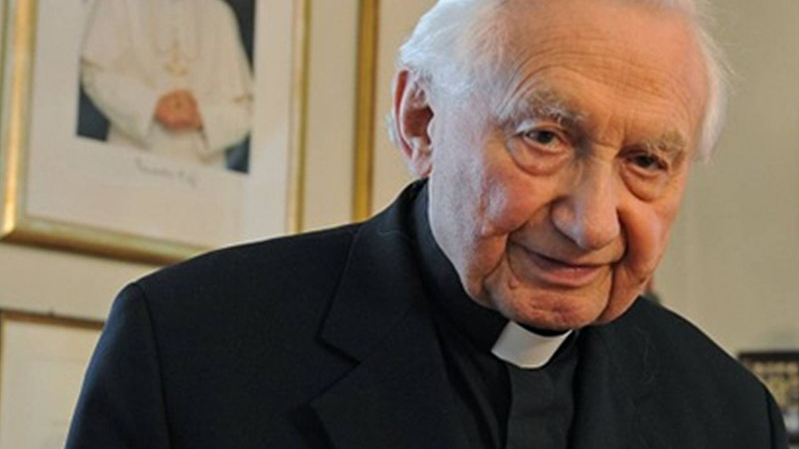 Katholisch.de has reported that Msgr. Georg Ratzinger, the older brother of His Holiness Pope Benedict XVI has passed away, at the age of 96, just 2 days after the 69th anniversary of his ordination to the priesthood.

Msgr. Ratzinger was born in Pleiskirchen, Bavaria on January 15, 1924. His father was a local police officer by the name of Joseph Ratzinger; his mother, Maria née Pientner.  He would soon be joined by two siblings, Maria and his famous brother.

George showed talent in music from an early age. He was playing the organ at Church during services already at the age of 11. In 1935 he joined the minor seminary and received further instruction. His association with the Regensburger Domspatzen, or Cathedral Choir of Regensburg, began in 1941.

He was conscripted into the German Army during the war and suffered a gun shot wound to the arm at Bolsena, Italy, at the end of the war on June 12, 1944. He was captured by the Americans and put in a military prison camp, near Naples, and was released in July of 1945.

In January of 1946, he and his brother Joseph, the future pope, joined minor seminary togother, and would be ordained together by Cardinal Michael von Faulhaber, Archbishop of Munich and Friesing, Germany, on the same day, June 29, 1951.

After completing his theological studies he was assigned as Choir Director in his home parish at Traunstein in 1957.

During the Second Vatican Council, he was appointed in February of 1964, as Music Director of St. Peter’s Cathedral at Regensburg.

During his career he had the honor of conducting the Cathedral Choir for historic events, such as the consecration of his own brother as Archbishop of Munich and Friesing, in 1977; performing for the state visit of Queen Elizabeth II in 1978, and the Pastoral Visit of Pope John Paul II to Munich in 1978.

On January 25, 2009 Msgr. Ratzinger retired from his position as Music Director and was made a canon of the Cathedral. In 2014, he celebrated his birthday at the Vatican with his brother Pope Benedict XVI.

He was visited in his death bed by his brother, Pope Benedict XVI on June 18-22, 2020. The rapid decision to remove Pope Benedict XVI by his handlers, led by Archbishop Ganswein and Bergoglio’s Nuncio in Germany led to much speculation about the Holy Father being a prisoner. With the sudden demise of his brother Georg, now, these speculations will only be increased, on the grounds that it was an act of great cruelty to deprive him of his desire to accompany his brother to the end.

For Msgr. Georg Ratzinger, may hi soul rest in peace, and may the Angels escort him to the Kingdom of the Heavens.