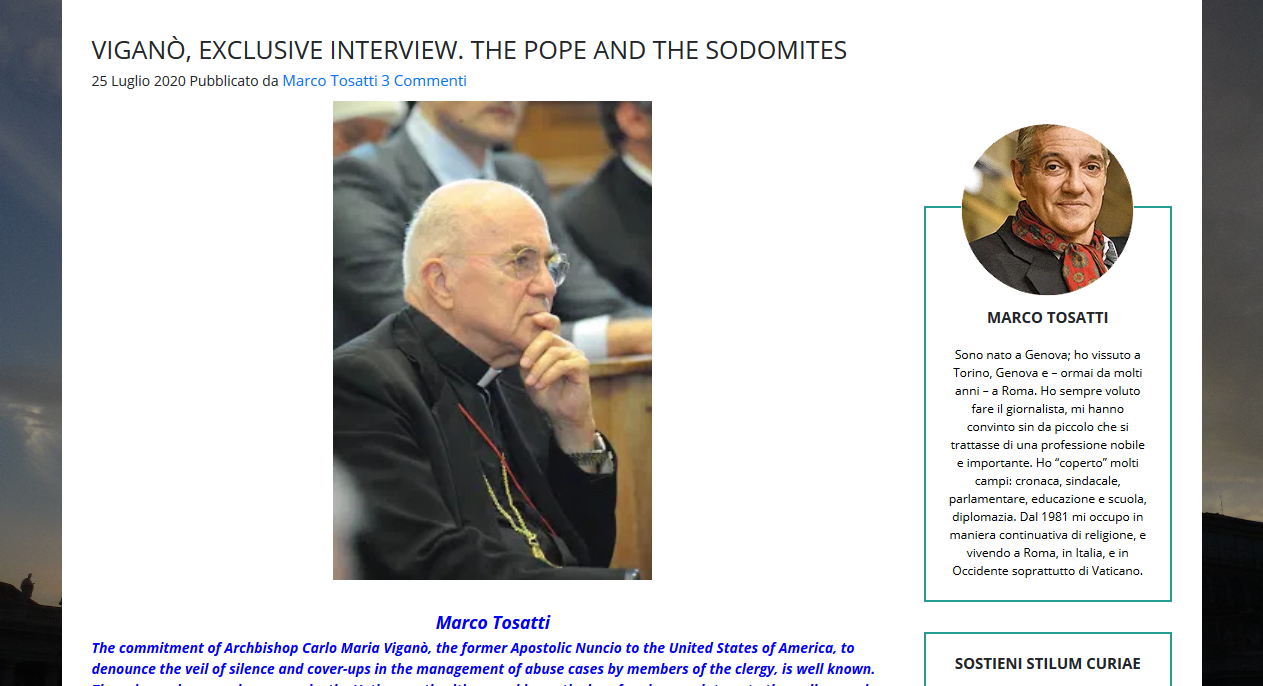 Many Catholics have been waiting for it for more than a year: the time when Archbishop Carlo Maria Viganò would publicly admit that the resignation of Pope Benedict XVI may be invalid, or that the Conclave of 2013 may be invalid.

Marco Tosatti: Don’t you think that in the end the Report that everyone is waiting for will be published?

Abp. Viganò: If it is possible to shed light on this affair, this will happen despite the Vatican: the interests at stake are enormous and directly affect the very top of the Church, and not only for questions of a doctrinal, moral, or canonical nature, but also for political and diplomatic aspects that have seen the Holy See become the object of a coup d’état with the complicity of those who should have defended it in its sovereignty and independence. What did not succeed during the pontificate of Benedict XVI was brought to fruition after his resignation. How can we hope that the one who is indebted for his own election to McCarrick – who was one of the main proponents of the secret agreement with China – will be able to clarify a series of events that involve him personally, demonstrating the connivances with the Chinese dictatorship against Catholics faithful to the Holy See and perhaps also the responsibility of that regime for the resignation of Pope Benedict? How can we imagine that the murky events of Saint Gallen will become clear, when it was there that the conspirators organized the election of Bergoglio? And how can we believe that the Church will purify herself of the corruption and vice of her clerics and prelates, when they are the ones who have taken power and who are promoted to the highest levels in a web of complicity between heretics, perverts, and traitors?

The one who ought to investigate the scandals is heavily involved in the appointment, promotion, and protection of those who are guilty: Bergoglio has surrounded himself with compromised and thus blackmailed personalities, whom he has no qualms about getting rid of as soon as they risk compromising him in his media image.

Let’s not forget that the legitimization of homosexuality is part of the agenda of the New World Order – to which the Bergoglian church adheres openly and unconditionally – not only for its destabilizing value in the social body, but also because sodomy is the principal instrument with which the Enemy intends to destroy the Catholic priesthood, corrupting the souls of the Ministers of God.

For this reason, at least as far as what seems possible, the entire truth about McCarrick will never officially come to light.