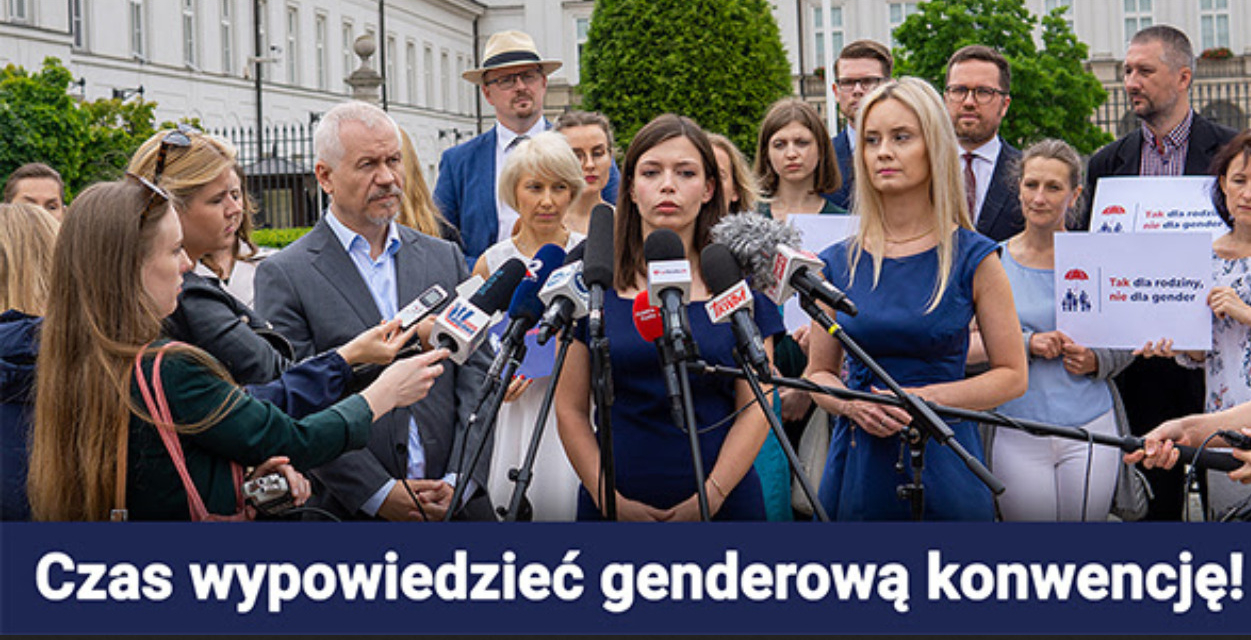 The events we have initiated in recent days give hope that after many years Poland will reject the extreme ideological Istanbul Convention. It is this document that orders the “uprooting” of traditions and customs, and the introduction of “non-stereotypical gender roles” content “at all stages of education”.

During a recent press conference in front of the Presidential Palace, we inaugurated the “Yes for the family, not for gender” legislative initiative with the Christian Social Congress and many pro-family civic organizations. Its aim is to terminate the Istanbul Convention and start work on an ideology-free international agreement that will reaffirm the rights of families and create scientifically based solutions to counter violence.

The very next day, the Minister of Family, Labor and Social Policy announced on Telewizja Trwam “we are preparing to terminate the convention”. Over the following days, support for this movement was expressed by many members of the government and MPs. Last Saturday, the Minister of Justice announced the formal beginning of government work on the termination. We can see, however, that the matter is not yet settled – we could hear from the spokesman of the government that the decision to terminate the convention has not yet been made.

Gender ideologues have not been idle. Left-wing media, Gazeta Wyborcza and TokFM radio, promoted the protest at the seat of the Ordo Iuris Institute and the march to the Ministry of Family. The scale of aggression and vulgarity of the protest, which gathered several hundred Warsaw abortion activists and LGBT ideologists, is best reflected in the content of the “petition” that was brought to the seat of Ordo Iuris, and which was limited to the words “Stop us in …”.

Mobilization on the part of family defenders is definitely stronger. Dozens of pro-family and patriotic circles joined the Civic Initiative Committee “Yes for the family, not for gender”. Soon the process of registering the initiative by the Marshal of the Sejm will begin, then signatures will be collected throughout the country.

I have no doubt that now is the best time to reject the Gender Convention. In recent months, the parliaments of Hungary and Slovakia have opposed it. Earlier, the Bulgarian Constitutional Court ruled that the Convention was inconsistent with the country’s basic law. The convention has also not been ratified by Great Britain, the Czech Republic, Latvia or Liechtenstein. In many countries, stronger and stronger social movements are operating against this document.

Leftist radicals are already attacking us with a whole arsenal of lies and fake news. They do not use substantive arguments and, against all facts, accuse the opponents of the Convention for “support for the legalization of violence”.

With the help of the Donors of the Institute, we will respond to the absurd accusations with a substantive voice of experts – we will overcome the slogans with reliable analyzes, and we will counteract the emotional attacks with a great information campaign showing the truth about the gender Convention and the dangerous consequences in countries that have fully implemented its provisions.

We will publish a report: “Why Poland should terminate the Istanbul Convention” containing the most important arguments in favor of the denunciation of a harmful document. We will react legally to the most obvious lies about the initiative.

In the coming days, we will also present an analysis of the documents issued by the GREVIO committee monitoring the implementation of the provisions of the Convention, which leave no doubt that it is not the fight against violence, and gender social engineering is the first and overarching goal of the Istanbul Convention.

The Harmful Convention was ratified five years ago, at the end of the PO-PSL rule. It was also then, thanks to the substantive criticism of this document, that our Institute’s position as an important participant in the public debate was established.

We were the first to score the convention for its extremely ideological character. We have proved that the drama of the victims of violence became for its authors only a pretext for the introduction of extensive social engineering.

The convention, the legal force of which after being ratified by Bronisław Komorowski, exceeds the laws of the Polish Sejm, undermines the concept of gender in general, replacing it with a gender construct (“socio-cultural gender”). It also contains many other controversial elements, including solutions that threaten the secrecy of confession or protect lawyers, psychologists and doctors reporting on their clients and patients.

According to the Convention, violence is closely related to the traditional roles of women and men. The authors of the document directly implemented the assumptions of the gender ideology, which announces that the elimination of elements of culture, religion, traditions and customs related to the different roles of men and women is the key to a world free from pathology, exploitation and violence. Ideologists target family, marriage, motherhood, fatherhood, and above all, the very concepts of masculinity and femininity.

To achieve these utopian goals, the convention mandates teaching about “non-stereotypical gender roles” in schools at all levels of education, obliging states to redirect large public funds to social engineering programs implemented by radical leftist organizations.

It cannot be ignored that the Convention completely ignores the problems of men – unless they suffer from gender identity disorders.

We also raise one more argument from the beginning. As we revealed, the convention was adopted in violation of the law, based on a falsified translation of the original document. The text adopted by the Polish Sejm differs significantly from the official versions and their exact translation published on the website of the Council of Europe. While the controversial term “gender” appears 25 times in the English version, its counterpart “socio-cultural gender” appears only twice in the Polish journal of laws.

The purpose of this procedure was obvious – to hide the actual content of the international obligations assumed by Poland from the Polish public opinion.

This is a Google Gmail translation.