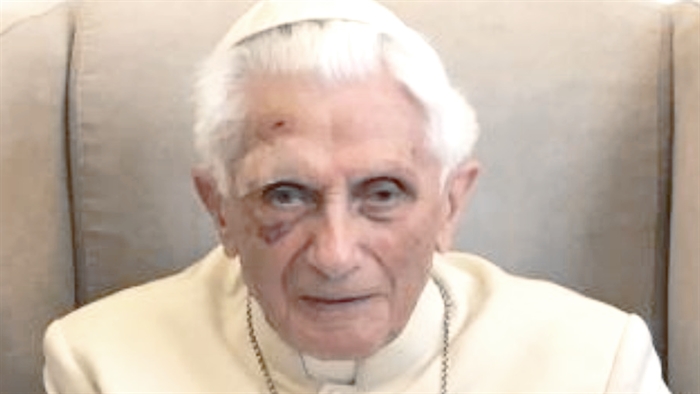 Those, who refused Jesus as the one and only Messiah, resorted in subsequent centuries to crafting an entirely new method of scriptural interpretation. I speak of the Talmudic practices which read everything into the text but the literal meaning which points to Jesus Christ as the fulfillment of all the hopes of the Sons of Abraham, Isaac and Jacob.

One of these practices is denying that a word has a proper meaning, and another is asserting that a word means the same thing as another word, even if mentioned in the same sentence.

And this is precisely what we see in the non-arguments of those who hold that Pope Benedict XVI validly resigned the Papacy by means of his Declaratio of February 11, 2013.

They simply will not read that Latin text according to the plain meaning of the words. They insist that it must mean what they have decided it to mean beforehand.

But that is the Talmudic method of reading the Old Testament on the basis of the a priori decision that it cannot point in any way to Jesus being the Messiah.

This also explains why those who accept Bergoglio as the Pope have fallen into idolatry. For just as the Jews of old — who denied the Davidic promises to the House of Judah and so broke from the Kingdom of Judah and established the Kingdom of Israel — fell into idolatry and sodomy in their high places and shrines, so Bergoglians who have denied Canon law and the divine Promises to the Successors of Saint Peter, such as Benedict XVI, today are plagued with the same two sins in their false “Church”, in schism from Benedict.*

I set before you, this day: Catholicism or Talmudism. The choice how to read and understand everything is yours, but only one leads to Jesus Christ. And in that Kingdom of Judah, you have to renounce munus not ministerium, to vacate the office of Saint Peter, because that is what Canon 332 §2, the law of that Kingdom, says you must do.

And this is why Globalists and Bergoglians agree that Benedict XVI is not the pope. They are using the same rules of logic and exegesis. Its one religion of fraud and disbelief.

* Objection: In Sacred Scripture, in the Book of Kings (1 Kings 11:31-32), we learn that God divided the 10 tribes from the Kingdom of Solomon to punish him for idolatry. Therefore, was not that division something good, and were not the Northern Tribes of Israel not at fault for separating from the Kingdom of Judah? cf. also 2 Kings 11:38.

I Reply: God can will a thing in several ways. Formally, by willing that which pleases Him from eternity in every way. This is called by St. Augustine, the will of good pleasure, or the will of the divine pleasure, or God’s will of preference, or His antecedent will, since it preceeds all time and history. With this will God wills things which He has planned, such as the Incarnation or the Resurrection of Christ or the salvation of the Elect.

Then there are two other wills, which are called permissive. There is the will God has which tolerates a thing which is not perfect, or evil, because in His Mercy He allows His creatures and servants to fail, wander, err or sin. This is called God’s consequent will, because it regards the relation of a historical event to God’s Will, and thus is consequent to His Eternity.

The other kind of God’s permissive will is, the will of punishment or justice. Whereby, God having seeing the wickedness of an individual or people, wills that they suffer a punishment.

As regards the division of the Kingdom of David or Judah or Jerusalem, into the Kingdoms of Israel, in the north, and Judah in the south, Scripture speaks in these passages of God’s permissive will to punish men for their sins. But this does not mean that the division was NOT contrary to God’s will of good pleasure, namely, that all should submit to David and to his future son, Jesus Christ the Messiah.

Nor does this event of the division of the Kingdoms preclude that the men who wanted to divide them or that they be divided did not sin against the divine prophecies to the House of David, which pertain to God’s will of good pleasure. In fact, the subjects of Solomon complained about the high taxation under his reign.

So in my comment in the article, I speak of the sin of men, not of the will of God, neither His antecedent will nor of His consequent will.