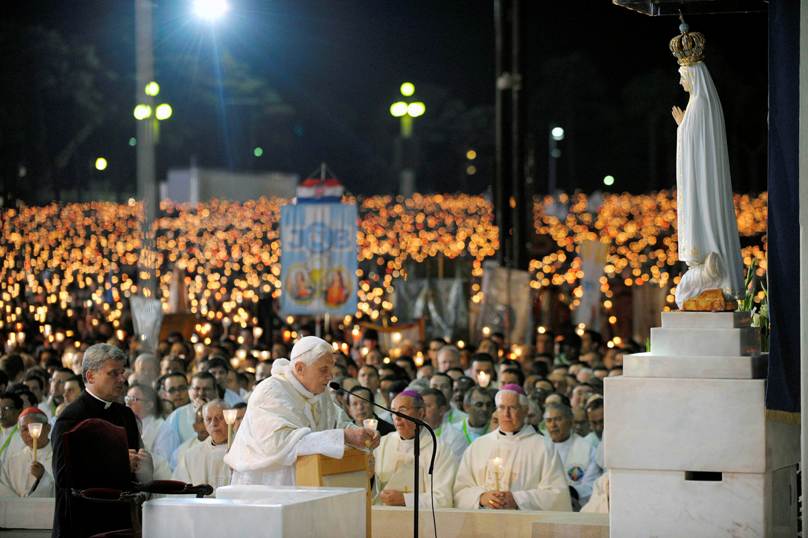 Father Lombardi: Thank you, and now come to Fatima, in some way the culmination, even spiritually, of this visit. Your Holiness, what meaning do the Fatima apparitions have for us today? In June 2000, when you presented the text of the third secret in the Vatican Press Office, a number of us and our former colleagues were present. You were asked if the message could be extended, beyond the attack on John Paul II, to other sufferings on the part of the Popes. Is it possible, to your mind, to include in that vision the sufferings of the Church today for the sins involving the sexual abuse of minors?

Holy Father: Before all else, I want to say how happy I am to be going to Fatima, to pray before Our Lady of Fatima. For us, Fatima is a sign of the presence of faith, of the fact that it is precisely from the little ones that faith gains new strength, one which is not limited to the little ones but has a message for the entire world and touches history here and now, and sheds light on this history. In 2000, in my presentation, I said that an apparition – a supernatural impulse which does not come purely from a person’s imagination but really from the Virgin Mary, from the supernatural – that such an impulse enters into a subject and is expressed according to the capacities of that subject. The subject is determined by his or her historical, personal, temperamental conditions, and so translates the great supernatural impulse into his or her own capabilities for seeing, imagining, expressing; yet these expressions, shaped by the subject, conceal a content which is greater, which goes deeper, and only in the course of history can we see the full depth, which was – let us say – “clothed” in this vision that was accessible to specific individuals. Consequently, I would say that, here too, beyond this great vision of the suffering of the Pope, which we can in the first place refer to Pope John Paul II, an indication is given of realities involving the future of the Church, which are gradually taking shape and becoming evident. So it is true that, in addition to moment indicated in the vision, there is mention of, there is seen, the need for a passion of the Church, which naturally is reflected in the person of the Pope, yet the Pope stands for the Church and thus it is sufferings of the Church that are announced. The Lord told us that the Church would constantly be suffering, in different ways, until the end of the world. The important thing is that the message, the response of Fatima, in substance is not directed to particular devotions, but precisely to the fundamental response, that is, to ongoing conversion, penance, prayer, and the three theological virtues: faith, hope and charity. Thus we see here the true, fundamental response which the Church must give – which we, every one of us, must give in this situation. As for the new things which we can find in this message today, there is also the fact that attacks on the Pope and the Church come not only from without, but the sufferings of the Church come precisely from within the Church, from the sin existing within the Church. This too is something that we have always known, but today we are seeing it in a really terrifying way: that the greatest persecution of the Church comes not from her enemies without, but arises from sin within the Church, and that the Church thus has a deep need to relearn penance, to accept purification, to learn forgiveness on the one hand, but also the need for justice. Forgiveness does not replace justice. In a word, we need to relearn precisely this essential: conversion, prayer, penance and the theological virtues. This is our response, we are realists in expecting that evil always attacks, attacks from within and without, yet that the forces of good are also ever present and that, in the end, the Lord is more powerful than evil and Our Lady is for us the visible, motherly guarantee of God’s goodness, which is always the last word in history.