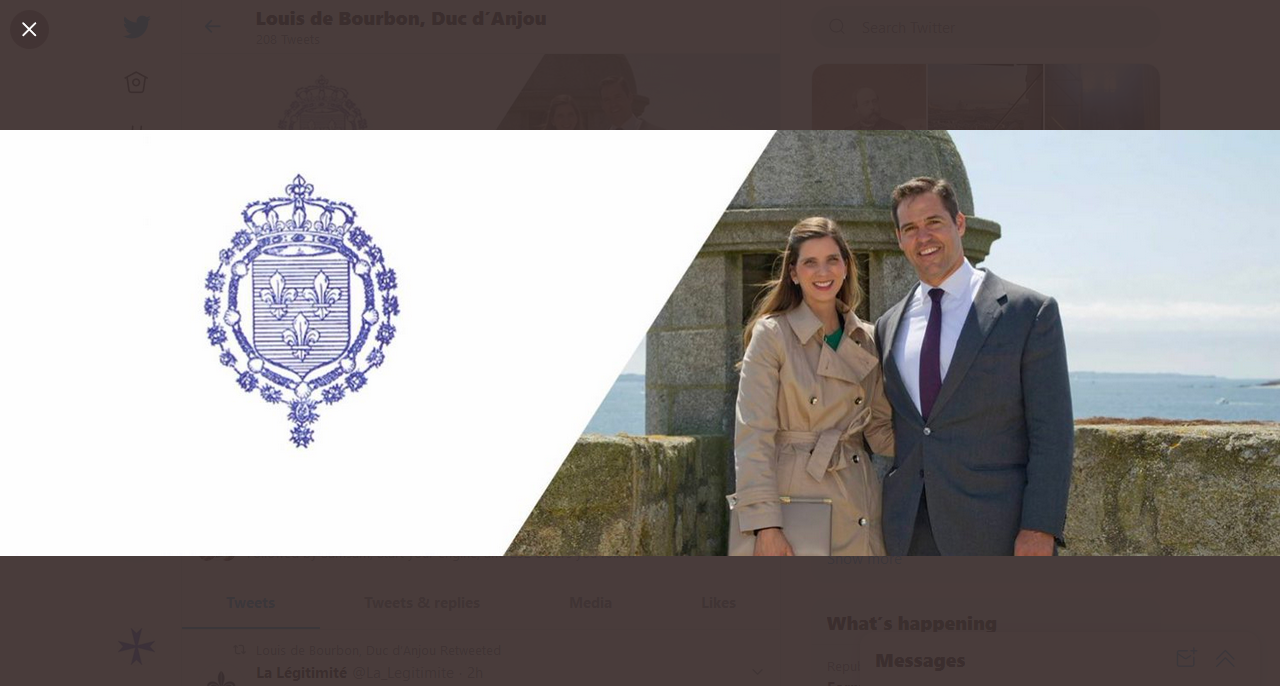 Address to the French People on the Feast of St. Louis IX, King of France

(Louise Alphonse is descendant of Bourbons who renounced their claims to both the thrones of France and Spain. He styles himself Duke of Anjou and Louis XX, in his claim for the French Throne, however.)

With the responsibility imposed on me by eight centuries of Capetian royalty, of which I am the heir, the current seriousness of the state of France , leads me to express myself, on this day when the Church celebrates Saint Louis, the model of rulers.
I have to admit that our country is sinking into more and more serious days, while I would like my statements to salute the renewal, that all faithful French people who believe in the destiny of their country, which they hope for with all their heart.
Affected for several years by a moral crisis which makes Her doubt Herself, Her mission, and Her identity, France is forced also to undergo numerous attacks from the outside, so diffuse and perverse that it is difficult to always identify them well.
It is difficult to find the right responses. The difficulty is all the greater as the truth is no longer looked at in the face and words are disguised by ideology to the point of losing their meaning.
Those who resist valiantly without losing confidence, often animated by a deep faith, are not enough to redress the situation.
Likewise, our soldiers engaged in many areas beyond our borders, note that their sacrifice and their abnegation are not enough in isolation to recreate a winning dynamic
The battles are certainly won on the ground, but it is first of all in the hearts and minds that the conditions for victory are forged, which must find its political expression.
It would take only a few things to give Her back the taste and the sense of victory that France had, sure of Herself and of Her mission; and remind Her of the great moments of Her past which remain examples for tomorrow.
This state of mind, which could arise again if the French wanted it, seems forgotten, annihilated. The “elites” since the Revolution have acted only out of self-interest. When will we return to the Common Good, to justice, to the protection of the weakest?
When will we agree to give words back their meaning and forget that there is no incivility, no young savages, but gratuitous violence and new barbarians without faith or law that we must fight and punish. Indeed, each of their crimes ruins social life?
Social life is already very difficult for many French people who are already faced with an often critical economic and social situation.
The last health crisis has shown how much our compatriots were capable of bursts and initiatives when the State does not oppress them; when it does not overwhelm them with increasingly heavy and unfair taxation since it no longer provides public services.
The French, in increasing numbers, realize that the institutions no longer meet their legitimate expectations.
How many more crises will it take? how many sacrificed for the eyes to open?
Lucid minds have asked the question of whether these events, with the accumulated errors that result in hundreds of thousands of deaths all over the world, were not the occasion to reflect on the disorders of the last decades.
The beautiful symbol of the “day after” seemed to hold a future. In reality a few months later, bad habits have largely triumphed over good resolutions and the days after seem even more catastrophic than those before.
The vote, in front of an almost deserted assembly of the so-called bio-ethics law (approving abortion up to the 9th month) is the most striking manifestation of this… It is at the same time contrary to the natural order and to ethics.
This law combines the denial of the current representative system by the way in which it was developed and the break with the foundations of humanity.
Manipulations against nature are taking a new step towards a society of the chimera where no limit seems to hold back men. The society of fear and constraints is now also that of planned death.
What world awaits us? What world will we leave to our children?
I am speaking here as heir and successor to the Kings of France, but also as father and husband. I know how many young couples are worried about the future of society; the future of their children; of our children.
Fortunately, centuries of history teach us that the most terrible situations are not irreversible. France has escaped other dangers and this even when it almost lost its sovereignty as in the time of Charles VII.
Joan of Arc’s mission saved him from a peril all the more eminent as the enemy was already installed on our soil. The one who in 1920 became the patron saint of Patriotism saved the country and restored the legitimate monarchy.
May Saint Louis, model of sovereigns and rulers, protect the France and help him find the meaning of his mission.
Source: Click to see entire Thread in French original
https://twitter.com/louisducdanjou/status/1298143492896706560

One thought on “Head of House of Bourbon, speaks out”