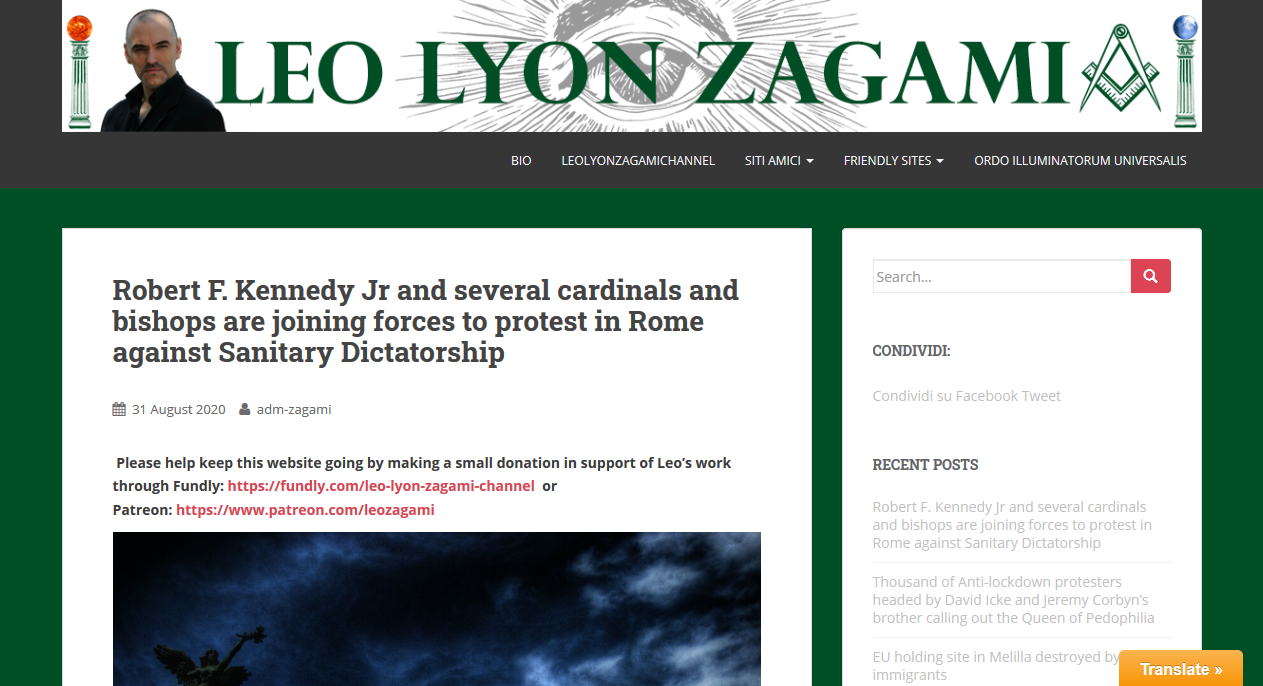 On September 5, there will be held here at Rome a large protest called, Save the Children, which is being organized by Forza Nuova, an Italian Facist organization which is controlled by the CIA as part of the Gladio post World War II operation. Forza Nuova shows their allegiance to the USA, by staging their events near the residence of the US Ambassador, who lives across the street from the Circus Maximus. This years protest on the 5th takes place at the Bocca della Verità, round the corner.

That the event, Save the Children, was ideated and planned for months by Forza Nuova was exposed by investigations conducted by Attorney Lillo Musso and confirmed by General Antonio Pappalardo, both of whom each head a political movement which is socialist in inspiration.

But Zagami adds an interesting added detail, namely that American Cardinals will be involved in this Sept. 5 event.

Admittedly Leo Leon Zagami is  Freemason (see his blog, here), but he speaks in a lauditory manner of the participation by these Cardinals through an organization called Vincit Leo Association.

I get the impression that the association is called that because it is financed or backed by those who admire Cardinal Raymond Leo Burke, but this is pure supposition on my part.

The association seeks, in Zagami’s words to:

A recently issued campaign letter which can be read here , informs its readers that “in the coming months Vicit Leo will launch a series of extensive meetings and investigations under the supervision of its Scientific Committee, its Juridical Committee, and its Ethics Committee”and that this “will take place in different countries in Europe, the USA, and around the world.”

The letter signed by Professor Pierfrancesco Belli of the Vicit Leo NGO also says that they “are gathering an overwhelming amount of evidence showing how a planned project of depopulation lies behind these economic interests. There are a lot of people who are responsible for this developing dictatorship: the most important two are Bill Gates and Tedros Ghebreyesus, who appear to want to rule and terrorize the population using AI systems and laws that reduce human rights.”

The Vicit Leo association is also asking for people who share the concerns expressed in the appeal to help them by making a contribution to their campaign and for those with professional expertise in law, medicine, natural science, journalism, and political lobbying to contact them  with ideas to form the professional backbone of this international human rights project that has the support of Archbishop Carlo Maria Viganò, a staunch enemy of Pope Francis.

FreeMasons have a way of being on both sides of every divide, so as to ensure the control of each part in a theatre which leads always to a masonic goal. So there is no surprise here.

But Archbishop Viganò’s participation is not surprising, since writing to President Trump, he appears to have moved entirely into the geopolitical orbit of the US Government. I think they have selected him to succeed Bergoglio, in a desperate attempt to prevent Peking from taking complete control with Cardinal Tagle, who is Chinese on both sides of his family and has, according to Ann Barnhardt, massive gambling debts at Macao casinos.

Zagami ties up the mystery about the Sept. 5 event. Because he says that the Vicit Leo Association has organized it. That means that Vicit Leo is Forza Nuova is Gladio is the CIA op.  The last Forza Nuova event was a small protest at the Circus Maximus, a place so large the Left wing government rarely grants it to any group for any protest. But Forza Nuova got permission for the 100 protestors. And even got permission to physically beat Italian police with wooden sticks, without being arrested!

Of course, Zagami could be misinformed.

I think Catholics need to wake up and realize that a lot of the news is planned and orchestrated by the Deep State. There is hardly any other rational explanation.