I produced a video in July about the news, had in some Italian newspapers, that the Government did not have the votes to extend the lockdown and thus that the COVID controls were about to lapse. The news proved wrong, since the Government extended the lockdown to Oct. 15, 2020 about 10 days later.

Nevertheless, the video was simply a news report. I have no other copies. It has been forever ByteBurned (Globalist version of Book Burning) by a hate organization operating as a social media video platform: YouTube.com.

Here is the video link, for posterity:

Here is the Nazi LETTER RECEIVED by FromRome.info Video at 10:58 AM, Rome Time, today 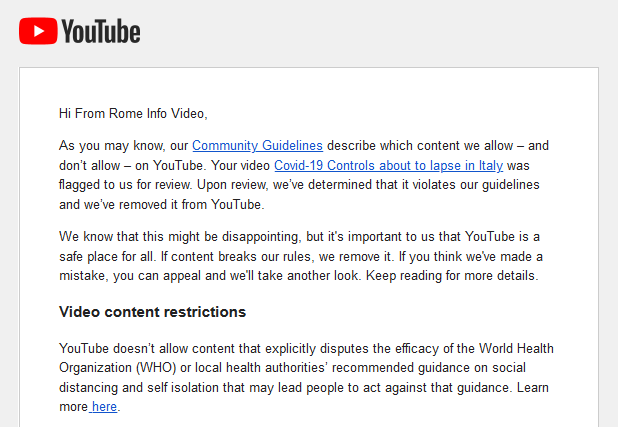 FromRome.Info would publicly comment on this matter, but our editorial policy does not allow profanity. So we leave that to you off grid.

However, the dimb bulbs at YouTube.com evidently do not understand that in US Law, by such a declared policy of censorship, they become LEGALLY CO-RESPONSIBLE and co-liable for the bad medical advice of the WHO and local authorities, which advice has already been flagged as causing hundreds of thousands of deaths world wide. This is why calling YouTube NAZIs, who were propaganda experts and promoters of genocide and mass murder, is no political exaggeration. It is 100% an accurate description.

YouTube.com is running SCARED if they are burning low-hanging fruit on channels with 2250 viewers like this video. It shows how frightened they are that the masses are revolting. Little do they know the kind of revenge the free peoples of the earth will take on their corporation and board of directors, not to mention their employees. They are guilty of so many crimes against humanity and freespeech, that they should get used to the thought of life imprisonment in solitary confinement, on a veggie diet, with a air tight medical mask over their faces, for the rest of their lives.

2 thoughts on “YouTube ByteBurns FromRome.Info Video on COVID-19 in Italy”