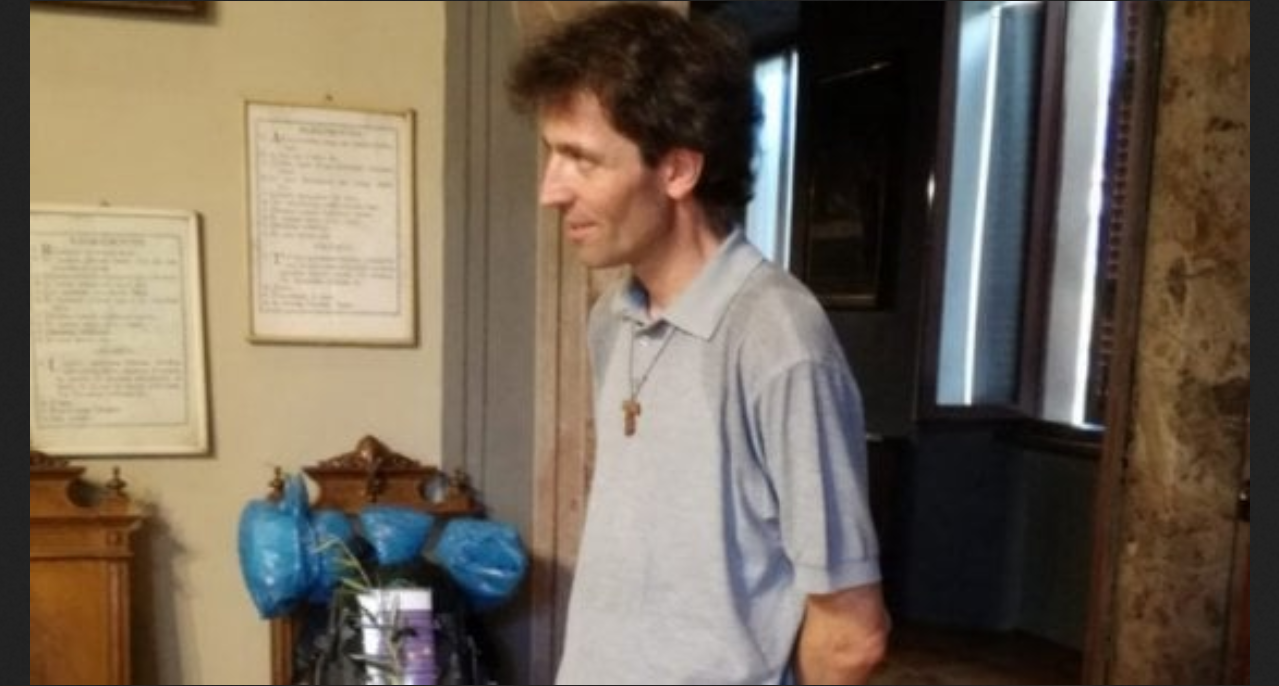 FEAST OF OUR LADY OF SORROWS, Sept. 15, 2020 — All Italy is in mourning today for Father Roberto Malgesini, 51 years of age, who was stabbed to death, today, at Como, Italy, in cold blood by an illegal immigrant from Tunisia who had been ordered out of the country.

Father Malgesini was known as the apostle of the poor. He traveled the city in his Panda, and helped all who came to him, whether for something to eat, for medicine, shelter, work. He was sought out by immigrants from Romania and elsewhere. His joy was to deliver bread to the hungry.

Known and praised by all for his charity and unending works of mercy. He was so zealous that he even risked in 2017 being fined by the local mayor for making an abandoned Church a place to welcome the poor and feed them during the day.

Today, he was stabbed to death. Multiple knife wounds were found on Father’s body, the most lethal of which was a slash to the neck.

The place of the murder was below the window of his home at the Piazza San Rocco at Como, Italy. The murder took place a little past 7 A.M., as Father Roberto began his morning tour of the city to bring food to the poor. His body was found at the foot of a tree. His grey Panda, loaded with all the food necessary for the poor, was found at his house, ready to depart.

The precise circumstances in which the Tunisian assaulted and stabbed Father Roberto to death are as of yet unknown.

The Tunisian, 53 years of age, had been ordered out of the country several times, most recently for violations of the COVID lockdown. He was known to be hot tempered and was frequently seen to be shouting for no reason in local business areas. Don Roberto was known to have been friendly to him and to have given him assistance before.

The head of Catholic Charities, Roberto Bernasconi — no relation to Father Enrico Bernasconi — called father Malgesini a “martyr”, affirming, that neither the city nor the world understood the mission he had for the poor.

His Bishop has expressed the deepest sorrow for the lost of his priest, calling him a “martyr of charity”:

Clergy from around Italy are shocked. Don Antonio of San Salvatore, Capurso, Bari, expressed himself briefly, saying, “May the Angels accompany you unto Paradise, and may the Martyrs greet embrace you upon your arrival!”

As the murder does not seem to be motivated out of hatred for the faith, let us pray for the soul of Don Roberto, that the Lord Jesus Christ might reckon unto his favor the merit of his many works of mercy for the poor, and do as Don Tonio asks.

This morning at 7 AM, #Como, #Italy #Tunisian illegal immigrant, 53, slits the throat of #Catholic #Priest #RobertoMalgesini, 51, at the Piazza San Rocco, and stabs him multiple times. Father was an apostle to all the poor.https://t.co/uY1g2uBgbp

If you would like to support Br. Bugnolo’s apostolic work, here at FromRome.info, please click this banner.