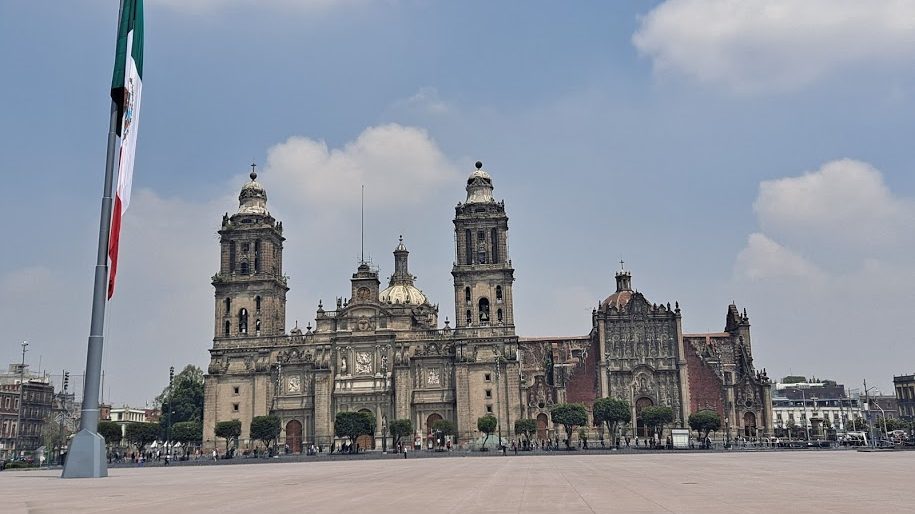 As a follow up to previous reports about the unfolding protest in Mexico City, which hopes to achieve the resignation of the the socialist-masonic President Obrador, I would call the attention of the readers of FromRome.Info to the video posted above, showing how Mexican patriots triumphantly took over the Plaza known as the “Zócalo”, with flags and banners of Our Lady of Guadalupe. This victory was granted us yesterday on the feast of Padre Pio, after two more judges (after a first judge days before) of the Supreme Court, granted protection for the protestors by demanding the President to remove the barricades he had placed around the Plaza.

The City’s Cathedral stands on this same Plaza as the Government National Palace, where protestors have been granted stay.

People from various States in Mexixo were told to hold off by the leader of FRENA — the Acronym for the Protest Movement, “Hit the Breaks!” — since the protest had been held hostage away from the plaza, but now that they received green light to take the plaza, people will begin to pour in. They are expecting an average of 15 million people by the end of November.  They have groups lined up to show up at certain dates so that the protest can last for as long as the president will need to resign.

It is an ocupation. They do not plan to leave until the president resigns.  Today, the leader of the protest (Gilberto Lozano) said that many CEO’s and small business owners of endless companies around Mexico are seeing a light of hope in this protest, because if the socialist-dictator-in-the-making is taken out, they would have saved their enterprises, so the CEO’s and business owners have flooded Gilberto’s lines of communication, asking him what he needs (whether food, money, supplies) and they are more than willing to provide for as long as the protestors need.

I have absolutely no doubt Padre Pio answered our prayers because Mexicans have triumphantly taken the Zócalo, on Padre Pio’s Feast Day, and right under his watch!
What is interesting is that the Mexican Dictator (president) has a brother named “Pio” who was recently caught in a terrible corruption scandal since a series of video clips which have been shortened here were published that show “Pio” receiving millions of pesos from criminals; the money were contributions to his brother’s presidential campaign of 2018, now the current president-dictator.

The fact that the protestors have entered the plaza on the Feast of Padre Pio, is an interesting detail because it sheds light on who the true and victorious St. Pio is, and also that the victorious taking of the Plaza by Mexicans was granted on his very feast.  In a sense, this is an embarrassment to the President and his corrupt family.

Despite the fact that protestors have finally been “allowed” to enter the Plaza, here are some of the things that the president has done to continue waging war against citizens and their rights as peaceful protestors:
1. Protestors are to stay within the confined section that is barricaded within the plaza.
2. Protestors are not allowed to leave or re-enter the confinements and which was marked with double fencing, police supervision. In this manner, police prevent new members seeking to join the protest. This is causing much outrage!
3. No sound system is allowed inside the premises of the confined area.
4. Violent mobs and provocateurs paid by the president’s political party “Morena” are allowed to freely wander in and out the circumference and heckle the protestors, some assaulting tents,stealing belongings, and physically assaulting protestors without penalty.
5. Police have been ordered to stand down in the case of an assault by violent mobs.
6. More people have arrived since the taking of the Plaza, and here is a picture of the Zócalo as of this evening.
7. Protestors looking to enter the Cathedral for daily Mass at noon, are searched by the National Guard which continues to occupy the Cathedral by the president’s command, even during mass.
8. Two members of the National Guard escorts the celebrant priest in and out of the altar and sacristy. The cowardly Cardinal of the Archdiocese, Aguiar Retes, made absolutely no complaint about this.
9. The Attorney who has been hired to defend the protestors from this tyranny, during an interview last night here, said that during a meeting with members of the local government that same morning, he realized we were dealing with a Venezuelan style dictatorship. He was shocked to find himself dealing with the worse of people in Mexican society. He wondered how these unprofessional, foul-mouthed, uneducated, people, had obtained such positions of power. They told him point blank during the meeting that “no matter how many protection notices we receive from federal judges, we will determine what the rules are for the protestors”.