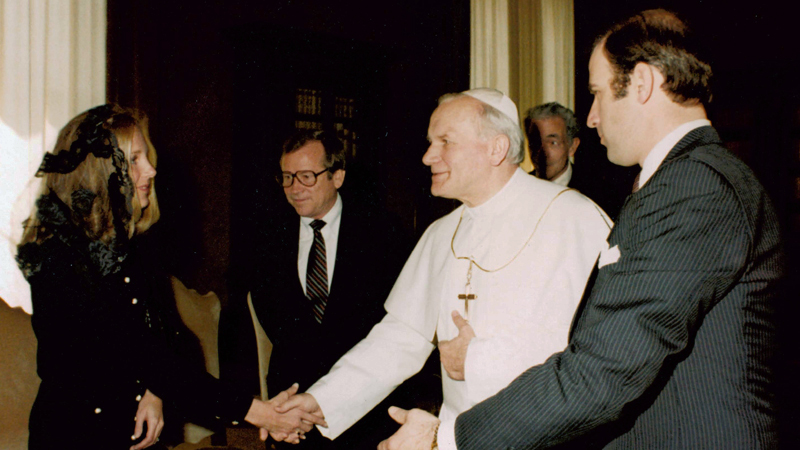 Being, on my mother’s side, a Sicilian by descent, and born in the United States of America, I cannot help to share a surprising fact which I ran upon today, namely, that the wife of Joe Biden, President Donald Trump’s rival for the Presidency of the United States, is a Sicilian-American.

Her grandfather was Domenico Giacoppo. He was born in Gesso in the Province of Messina. He emigrated with his father, Placido,  and the whole family to the United States in 1900, taking a steamer from Naples and arriving in Philadelphia.

The family, to avoid discrimination, did what many Italian families did back then: they anglicized their surname, and thus changed Giacoppo to Jacobs.  Giacoppo actually means James in English, however, and is taken by Italians after St. James the Apostle, patron of the Spanish Riconquista. (Spain ruled Sicily for long centuries and thus left a strong imprint on the culture of the island).

The family settled in Hammonton, New Jersey, where many families from Sicily came to settle, and with their saving buying small farms. Though at first, they worked as agricultural workers. A rail line to Philadelphia caused Hammonton to boom in the early 20th century, since it could sell fresh agricultural products quickly to both Philadelphian and New York Markets. (I know this, because my own Sicilian great grandfather and grandfather did this there).

Jill was born on June 3, 1951 in Hammonton. Her family moved to Cherry, Hill, in the outskirts of Philadelphia. When she was 15 years old, she chose to leave the Catholic Faith and became a Presbyterian. After marrying and divorcing her first husband, outside the Church, she married Joe Biden in 1975 in the Catholic Church, at the Chapel of the United Nations Building. (Before 1983, the Code of Canon Law did not recognize Protestant Marriages as valid, so they probably needed no annulment nor dispensation).

The Bidens’ politics is about a far as you can get from the Catholic Faith. In truth, both are apostates and 65% of Catholics in the US voted for Trump, whose wife is also said to be a Catholic. But I have posted this report,  not for the sake of politics, but for personal reasons of similarity: since my own grandfather, born at Messina in 1893 and who emigrated to the USA in 1907 on board a boat from Naples to Philadelphia, lived in Hammonton with his father, Francesco, who had a farm there for some years.

For more information, in Italian, about Jill Biden’s Sicilian ancestry see this article.

CREDITS: The Photo of Joe and Jill Biden meeting Pope John Paul II in 1980, is from the Wikipedia article in Italian about Jill.

9 thoughts on “Jill Biden is a Sicilian-American”