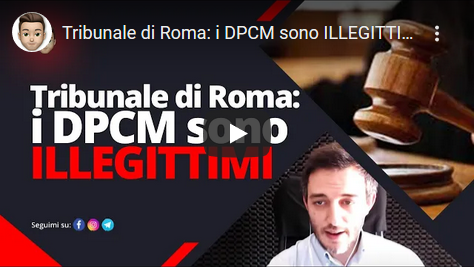 More information on the end of the scamdemic In Italyhttps://t.co/ubDRVlBMsu

Case n. r. g. 45986/2020 regarded a business which was fined for violating the Covid-19 Scamdemic controls in Italy, as they were imposed by the Prime Minister of Italy in DPCMs (Decrees of the President of the Council of Ministers– the Official title of the Prime Minister in Italy), and subsequently had to close operations, resulting in the inability of the leaser to pay the property owner rent.

The court absolved the defendant of responsibility in not being able to pay the rent from April to June, on the grounds of weighty constitutional principles:

This case regarded a sports complex which was leased by a business for such use, in which the leaser failed to pay rent in May and June, and the property owner sought to obtain such rent. The Court ruled that the leaser did not have to pay the rent, but that the owner of the property should enter in to mediation with the leaser for the ending of the lease.