If the title of this blog post seems like an exaggeration, I will prove it through secular hyperlinks below, all of which you can follow for confirmation.https://t.co/a4rVBMwX5L

You get sick, and have the symptoms of an infectious disease. The doctors diagnose you has having an infection caused by virus X. They treat you.

If you are more fortunate, before entering a part of the world with virus X you take the vaccine for virus X. These traditional vaccines contain a weakened form of the virus, which, when injected into a human body, cause the same anti-body reaction as the real virus, but in a reduced intensity, so you can survive it. When you encounter virus X, you body’s immune system kills it upon entrance.

But in the case of Covid-19, things work backwards.

They claim Covid-19 exists. And they claim that this disease is caused by SarsCOV19, a virus. But instead of giving you a weakened form to vaccinate you, they developed allegedly a new type of “vaccine”. A mRNA “vaccine”.

In a mRNA vaccine, part of the tissue of your own body is injected in such a way that the mRNA enters some of the cells of your body and causes them to produce the non-Human protein that causes an anti-body reaction. The lympocytes are created by your immune system and they track down the cells which were injected and kill them.

Thus you are not really being vaccinated for anything. The mRNA strands with which you are injected do not have to be from SarsCOV-19, and SarsCOV-19 does not have to even exist to make this kind of vaccine.

Hopefully you now realize that the product you are being demanded to take is 100% medical fraud. 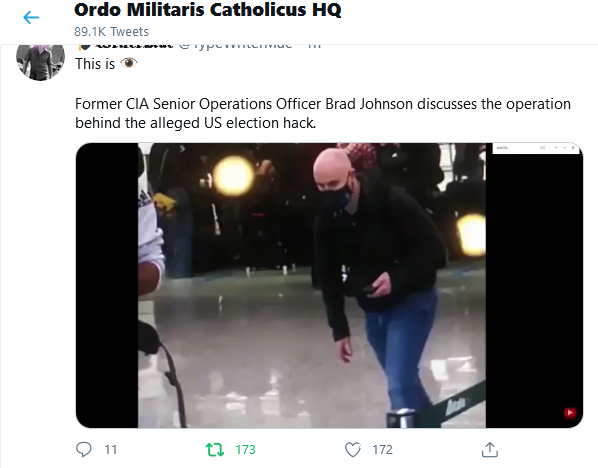 According to the CIA Officer, in the above video, this is the guy who hacked the US Election from the US Embassy in Rome, Italy. If anyone can assist FromRome.Info in doxxing this guy, please leave a comment below.

January 2, 2021 A. D. — The rumor that Bergoglio would resign in 2020 — which was launched by Austen Ivereigh after Bergoglio viciously slapped the Chinese woman on New years Day, last year  — has turned out to be merely that, a rumor. 2020 has passed and 2021 has come, and Bergoglio still remains.

But now other voices, here in Rome, are saying that Bergoglio will likely resign after the Solemnity of the Epiphany, when the new law on the Roman Curia will be published. In an attempt to downplay the reasons for such a resignation, voices say it is because he was elected to reform the Curia, and having finished his job, he recognizes that it is time for him to move on.

That is the cover story, at the very least.

The truth is more likely that the College of Cardinals, which regards the Vatican as its private Club House, is enraged at Parolin’s investment schemes which caused 10 years of Peter’s Pence to disappear in a real estate swindle, thus destroying world wide credibility in the most public international fundraising effort which the Vatican conducts annually, not to mention a very great loss to the Vatican balance sheet, including 50 million dollars in Bergoglio’s personal account. That’s a real Ouch to the kind of man Bergoglio really is!

But there is another problem: Bergoglio cannot resign and if he does so, he and the entire College of Cardinals will be in a fix.

Because since Pope Benedict XVI never renounced according to canon 332 (because he renounced the ministerium not the munus of the Petrine Office), Bergoglio has nothing to renounce.

And if he act as if he does, then he will have to simulate a resignation according to canon 332.

And that’s not easy to do.

Because if Bergoglio renounces the ministerium, not the munus, then some will say he has not renounced. Others will ask why he has chosen to use the same words as Benedict, thus affirming Benedict’s continuing magisterium. Both are serious. In the first case, some Bergoglians will end up sustaining the position of Catholics and thus inadvertently prove that Benedict is still the pope. In the latter case, Bergoglio will seemingly deny his own magisterium, and thus imply that Benedict is still the pope.

If Bergoglio does issue a text of renunciation, watch which words he uses, because they will reveal the whole plot to make Pope Benedict XVI appear to have renounced completely in 2013.

But the other problem is, that when Bergoglio steps down, the College of Cardinals will have a problem. They cannot convene a conclave so long as there is a Pope living, who has not renounced the munus of the Petrine Office.

And even if they convinced Pope Benedict XVi to do that, the present composition of the College is incapable of validly electing a Roman Pontiff, because it contains persons who are manifestly not Cardinals or Catholics.

Also, there is the problem of when to call the Conclave and where to house the Cardinals.  Bergoglio has taken over Santa Marta which is where they should reside during a conclave.  Also, a Conclave can only be called after the death or resignation of a true pope, not an antipope.  Any action by a College of Cardinals, made up of solely valid cardinals, would still be invalid if they attempted to hold a conclave after the resignation or death of an antipope.

I, and many many faithful Catholics the world over, who recognize that Pope Benedict XVI is still the only true Pope and that he was forced out by a coup d’etat, pray that the Cardinals — after Bergoglio leaves the scene — snap back into their senses.  And there will be an intense lobbying effort to obtain that, after Bergoglio exists stage extreme left.

I think the NWO wants him to resign before Benedict dies so as to diffuse any attempt in electing a successor to Benedict if Benedict dies while Bergoglio still is in power. You see, the NWO is all about narrative control and psychological control. If Bergoglio steps down and Burke is elected to replace him, then the Antipope Burke would prevent many Catholics from recognizing any need to elect a successor to Benedict when Benedict dies. And Benedict’s death is near now. So they need to replace Bergoglio with someone which will confirm that Bergoglio was a true pope.  This is the real nefarious hand behind the scene.

The other problem is where will Bergoglio go? Argentina does not want him. The Vatican would be insufferable for him, with 2 other popes around: one calling the shots.  Maybe a Gulf State will take him?  God and the Masonic Lodges alone know.

I would nominate him to become the private chaplain of Barrack Obama. But Obama is a Muslim, you may remark. That will make no difference to Bergoglio!