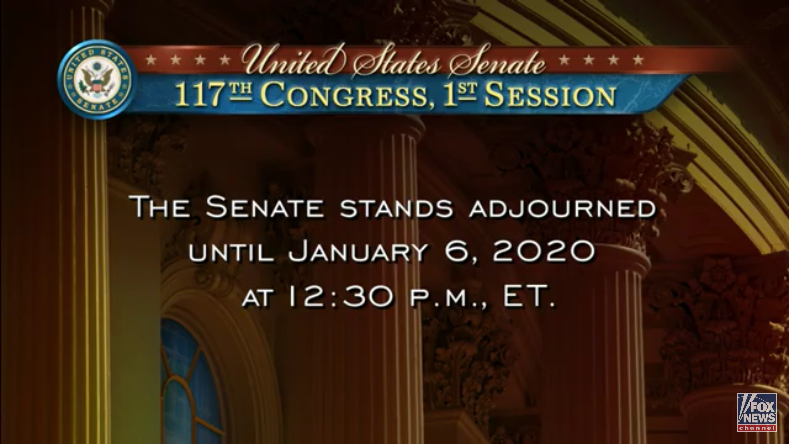 UPDATE: 5:07 PM Rome time, Tuesday, January 5th.  — President Trump has sustained the legal argument below, which I made on January 3rd.

The Vice President has the power to reject fraudulently chosen electors.

The American Republic is headed to a massive train-wreck. The United States is imploding politically, because the political class which rules it has made it quite clear that the most outrageous fraud and tyranny against the U.S. Citizenry is acceptable to themselves.

The hour when all hell breaks loose — as we are wont to say in American English in regard to tremendous outbursts of conflict — is 12:30 PM, Eastern Daylight Savings Time, Washington, D. C., January 6, 2021 A. D..

For at that hour the Congress will begin the process of a Joint Session to count the Electoral Votes for President and Vice President of the United States. The House inviting the Senate into its chambers shortly afterwards.

During the Joint Session the terms of the 12th amendment are to be dealt with, which amendment reads:

The President of the Senate shall, in the presence of the Senate and House of Representatives, open all the certificates and the votes shall then be counted;

The person having the greatest number of votes for President, shall be the President, if such number be a majority of the whole number of Electors appointed; and if no person have such majority, then from the persons having the highest numbers not exceeding three on the list of those voted for as President, the House of Representatives shall choose immediately, by ballot, the President. But in choosing the President, the votes shall be taken by states, the representation from each state having one vote; a quorum for this purpose shall consist of a member or members from two-thirds of the states, and a majority of all the states shall be necessary to a choice. And if the House of Representatives shall not choose a President whenever the right of choice shall devolve upon them, before the fourth day of March next following, then the Vice-President shall act as President, as in the case of the death or other constitutional disability of the President.[a]

So instead, the following law will be followed, which is now stated in 3 US Code §15:

The difference between the 1887 Electoral Count act and the 12th Amendment, is that according to the 12th Amendment, the Vice President has the discretion to simply not count ballots which are disputed, whereas in the 1887 Count act, the House and Senate adjudicate their validity, if an objection is brought against any of them, at the motion of at least 1 US Senator and US Representative.

In the first manner, Trump would end up the victor, since with the disputed Electoral Votes from Arizona, Wisconsin, Michigan, Pennsylvania and Georgia omitted, the election of the President would devolve upon the US House, for wont of either candidate, Trump or Pence, obtaining a majority of votes necessary, and for the fact that, in such a vote wherein each State gets one vote, the Republican Party would likely elect Trump, it having a majority of the States under its control.

But in 1887 Act, both houses must object to invalidate votes and the Vice president must count votes which are fraudulently certified by State Secretary of States, and not count votes sent in which are not certified. In such a case, Biden will surely will by having more than 270 electoral votes.

At the same time there will be more than 1 Million citizens gathered in a grand march through the Capital at the invitation of President Trump, many of them bearing arms.

To avert disaster, Senator Ted Cruz is working with Senator McConnell, majority leader in the Senate, to delay their vote regarding validating votes until after the million patriots leave the city, so as to enable a corrupt solution without reaction from the citizens being feared, according to Attorney Sidney Powell:

It is impossible not to see the fraud here unless one is a communist or part of it or part of the coup@realDonaldTrump
@senatemajldr @SenateGOP @freedomcaucus @HouseGOP @JosephJFlynn1 https://t.co/4F2rt0ayhL