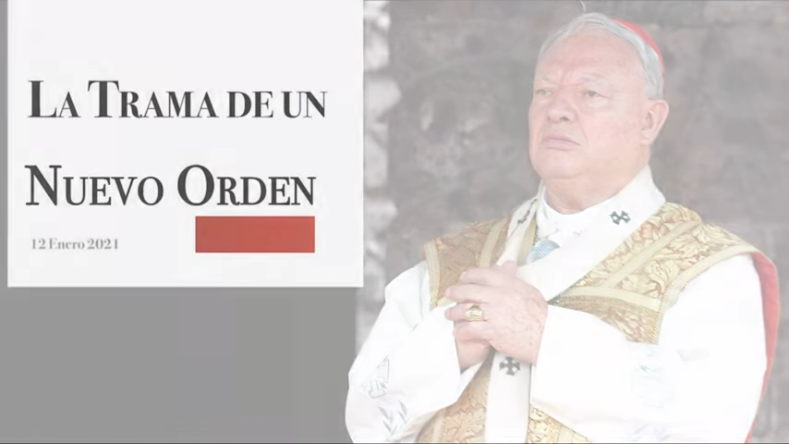 This is the full uncensored video which was erased the other day.

HIGHLIGHTS:  Cardinal Sandoval says the microchips to be inserted by vaccines are the Mark of the Beast. — The present tribulation was foretold in Scripture. The Pandemic is a scam to take control of all the nations, establish one world government and currency and a one world AntiChristic religion.  Bill Gates is the chief proponent. But the Gates of Hell shall not prevail. Christ will destroy their system with a breath from His Mouth.

Here is the translated transcript of the recently censored Youtube video, of Cardinal Emeritus Juan Sandoval Íñiguez, in which he denounces Bill Gates, exposes the plans of the New World Order (especially in how this pandemic has served the purpose of establishing a new world order) and speaks to End Times Prophecy, as well as the definitive Triumph of Jesus Christ upon evil.  You will find this to be very encouraging!

It is headed for the long haul! — This pandemic is not ending in one or two months!

Perhaps this entire year, perhaps another three, four, five. Or six years, whatever these men want.

It’s headed for the long haul. — it is a hard situation that has not been seen in the history of humanity

And, there threatens, a so called Bill Gates, already well known by all of you because he is a “prophet”. He predicts the future and just as he predicted this coronavirus pandemic, he also said somewhere that a smallpox attack can come; an illness that was thought to be already overcome, suppressed, but coincidentally, by chance, it turns out that in an Atlanta laboratory of which Bill Gates is a benefactor, a sponsor, has a strain of smallpox. So, Let us be prepared for that new pandemic, new threat. The question is what do these men intend?

They are people high in power, In finance, very high and very hidden people, although we now know the names of several of them.

What do they pretend with this!?  See, they’ve created this virus and now it attacks many more nations of the earth.

So what.. what do they pretend?

They weaken nations, they weaken them, they impoverish them, they put them in more debt. Therefore, their economy goes down.

They weaken and wipe out education, closed schools, so-called distance learning, prolonged periods of vacation.  They impede religious practice. As it happened the whole year that Just finished.

They shut down church buildings, they reduce the number of people, they prevent meetings/reunions etc. etc. but above all they are causing fear, a terrible fear in the population, and a fear that is damaging because that fear sickens. The doctors know it, they must say it, that fear inhibits defenses, that as one says, it annuls the body’s immune system.

Let us not live-in fear.

They want to reduce the population because they say that we are too many, that seven billion or so amount of people on the earth is too many, that the earth cannot sustain them and that we must eliminate some 500.. About 5 or 6 billion, eh.. So that, clearly, only they are left.

It is possible that temporarily so the struggle, for example, of the United States at this moment, is not between Biden and Trump. They are two human persons who pass, Come and go. The fight at this time is among those who want the world order, that is, the global-crats.

The global-crats and the nationalists that would want the independence of that great nation that is the United States and it would do a lot of good if it wound up independent to influence other nations to also be such. But surely, in the United States, very many are partakers of the new order and also in other countries of the world.

Often they don’t even hide themselves, nor cover their face, let it be known.

It is possible that, temporarily, they come to implement this new order and I say this also because in Divine revelation, the old and new, there are mysterious words that begin to be fulfilled now.

For example, the locking in of oneself, Being locked inside your home, to close the door and

stay locked up inside is there is Isaiah, Chapter 20. The chip they intend to put in the vaccine to keep you in control is the Mark of the beast, that says, that the Apocalypse says, chapter 13 “and the one who does not carry with them the mark of the beast, in the hand or on the forehead, can neither buy nor sell.” They will keep him paralyzed.

Our Lord Jesus Christ spoke of a great tribulation and a difficult time in which, somehow, He will come and he asks himself: when the Son of man comes will he find faith upon the earth? will there still be faith on earth? In other words, It’s like it speaks of a great defection regarding the faith in Christ and nevertheless, the Lord says: But those days will be shortened , they will be shortened for the sake of the elect, so that the elect may not be lost, not defect.

So, there are mysterious words in the Sacred Scripture, all of the Apocalyptic literature is full of these mysterious things that one does not take them seriously nor understands them until they happen, or are happening, like today, but if I said that “temporarily the the new order can win, the new order can come: that, I do not exclude, definitely they will not win.

Definitely, Christ will win . He will win definitively.

The Lord.. mysterious but strong… Where it says…

No, it will not triumph.

He who will triumph is Jesus Christ Our Lord Whom, in addition, is with us, Who when He left us said, “I will be with you every day until the consummation of the ages.”

The Lord is here. He is aware of what is happening.

He looks down from heaven and laughs at the plans of man to thwart them with a blow.

Paralyzed, to more easily rule us, and make in all the earth an immense flock where few shepherds from very high positions of power, very hidden very secure, dictate to us what we have to do and how we  have to live, but, much more higher than them, much more powerful than them Is our Lord Jesus Christ, immortal king of the Ages, which He carries with Him on His shoulders Written, the power and his royalty, King of Kings, Lord of Lords. Let us not live in fear. Those of us who believe in God. Those who believe in Christ, Our fate, O Lord, is in your hands! And you will free us according to your immense Goodness and mercy.

May the Most Holy Virgin protect you, Above all, the Virgin of Guadalupe who committed to us when She came at the dawn of evangelization:  You have nothing to fear. “Am I not here who am your mother?

Are you not taken into my account and are in my lap?

Well, so let us be confident in what we believe and let us live with God and without fear of men and May almighty God bless you in the name of the Father, the Son and the Holy Spirit. Amen

4 thoughts on “Cardinal Sandoval denounces Gates and the NWO”