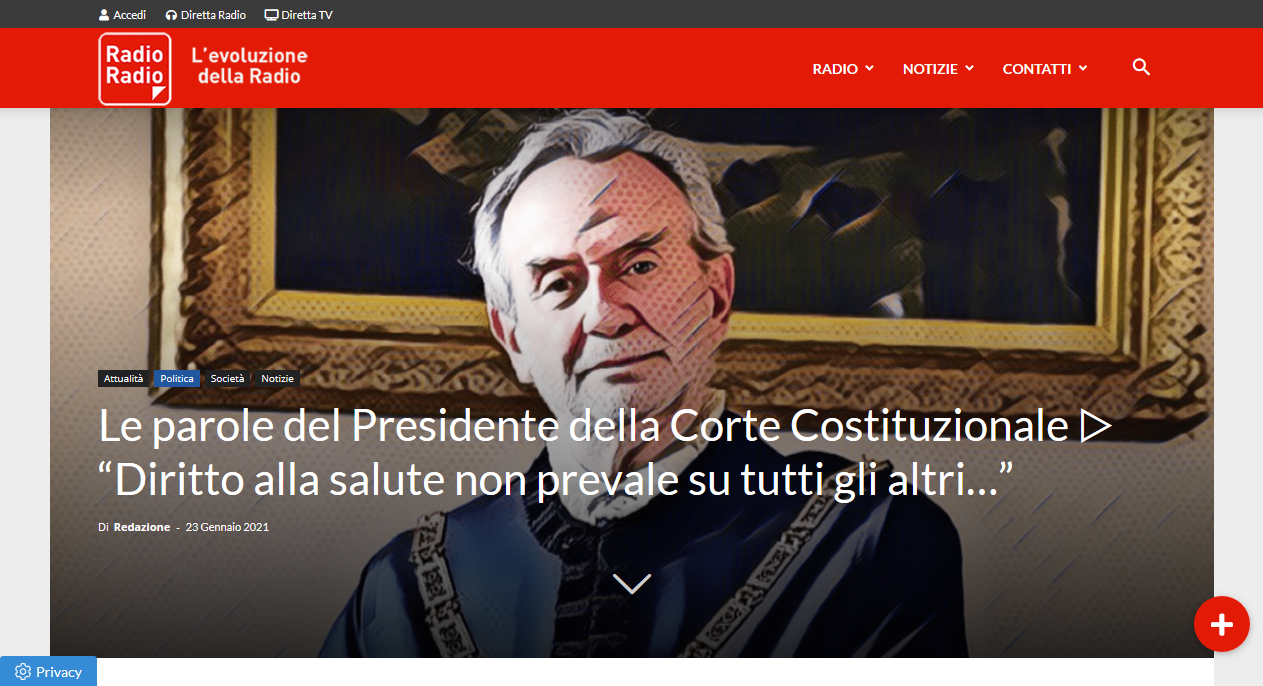 While the gross violation of constitutional, civil and human rights lurches forward in the U.S.A. with the glee of the Marxist cabal which has engineered a coup d’etat, their crimes are not going unnoticed without condemnation through Europe.

Here is an English translation of the transcript of the above video, the original Italian of which you can find here. The comments are by Prof. Enrico Michetti, director of the official Administrative Gazette of the Republic, in regard to the interview by Giancarlo Coraggio, President of the Italian Constitutional Court, who decried in his recent interview Zucherberg’s censorship of Donald Trump in specific.

“I wanted to come back to that topic that the President of the Constitutional Court spoke about yesterday, the highest magistrate we have in Italy, Judge Coraggio (in name and in fact — Coraggio means “Courage”) who gave an interview dealing with all the issues that are being dealt with at the moment.

In addition to saying that it was a barbarity, that of Capitol Hill, he also clarified a topic that has interested us in the last period: the fact that a private individual could obscure the voice of a President of a Republic.

I had been quite mild in saying that this is a serious matter. He defined it with a word that in law is a cleaver, a hatchet that falls: “Intolerable.”

As if to say that it is the end of law, when a private individual obscures a President of a Republic. The end of democracy.

Why is this? Because at the basis of democracy there is the consent of the people who appoint someone to represent them. If you obscure him, you are obscuring the will of millions of people to be able to express their opinion. Directly or indirectly.

In Italy, some time ago, something even more significant happened: the then President emeritus of the Republic, Cossiga, said that the National Association of Magistrates was an association of mafiosi.
RAI — the National TV Broadcaster — did not permit itself to censor him.

Because there are moments in which strong things are said – this does not mean that I agree with what Cossiga or Trump said – at a time when very serious facts are happening.

Rights must coexist: freedom, health and work must coexist, and it is there that we see the wisdom of a government. In keeping these rights in balance.

“There must be no tyrannical rights that kill other rights,” Coraggio said.

“Be careful when you unknowingly talk about the MES.” — (The MES is the agreement between the Republic of Italy and the EU Central Banks for debt payments and loans).

I also say something else: let’s be careful, because Europe always invites you to take the money. You remember Greece, which put in its own no doubt, but it was constantly being invited to take money from Europe.

Now you go with the broom to look for these “builders”. But if up to now only debts have been incurred… but builders of what? Of other debts?”