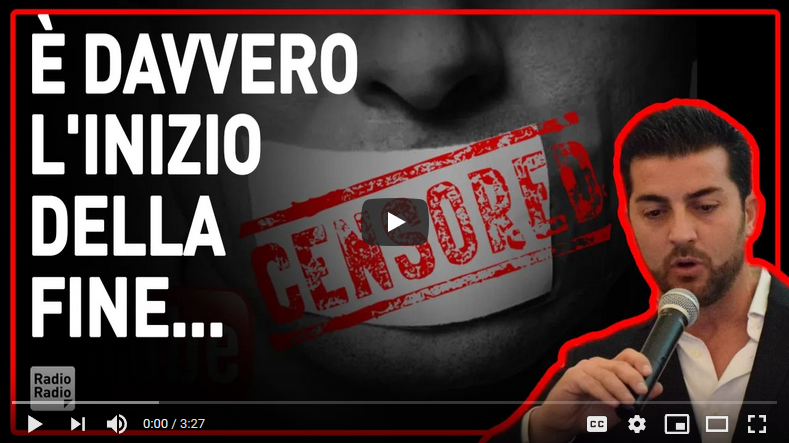 In this video, Francesco Amodeo, one of the leading socialist political critics of Globalism in Europe, laments that YouTube has begun to demonetize channels in Italy.

He complains that he has always observed YouTube’s rules and has never received a censure or strike, yet was nevertheless demonitized because he went against the narrative being pushed by the New World Order, Great Reset and Globalism.

He rightly characterizes the move by YouTube to be a dishonest attack on free speech, arguing that if he had said anything defamatory of anyone — and it is his habit of always mentioning the names of those of whom he speaks — they could have resorted to the Italian courts to obtain justice.

But they did nothing of the kind.

Which proves that he speaks the truth.

Rather, they demonetized his channel and that of many of his associates and acquaintances to prevent them from earning a living through their counter-narrative programs.

He calls this the beginning of the end for human liberty.

I have observed the same attack on liberty long before this prominent socialist was attacked. Because in June, of 2020 A.D., PayPal shut down the account of Ordo Miltiaris Inc. for no reason at all.  And Stripe followed suit in October. Also without explanation. This NGO only sells flags and bumper-stickers and raises funds for humanitarian relief of Christians. Evidently, these are now both heretical enterprises!

There is a strategic goal of ending all individual independent sources of income and financial activity which are not controlled by the elites. The recent move by RobinHood to stop taking crypo-currency transactions, so as to prevent the group Wall Street Bets from making stock investments which are causing the big trading houses in New York City to lose billions, is another example of the same move.

The Great Reset is about enslaving everyone, and the means the Globalists have chose is to destroy the economic activity of everyone that they do not control.

In the USA this is a federal crime, it is called Racketeering. And that is why when they do it, they do with without explanation or with some cover motive. They attack the little guys, whom they know do not have the political connections or funds to counter with effective legal methods. — This is the worst form of plutocracy.