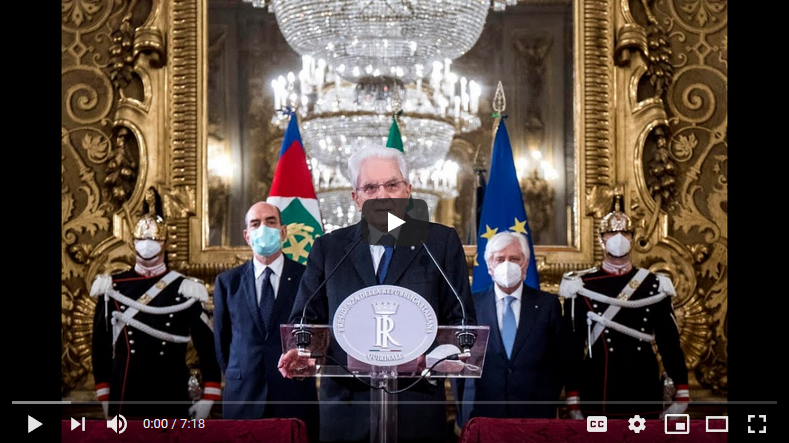 The President of the Italian Republic, Sergio Mattarella, has announced, last night, that the previous government of Giuseppe Conte has failed to offer any plan supported by a majority of both houses of Parliament.

But what he said following was shocking. That the only other solution, to have snap elections, cannot be had because the Scamdemic has to have a government with full powers and not a Parliament paralyzed with popular elections!

In other words, Democracy is no longer necessary. Only oppressing the people with more Scamdemic is necessary as a response to a pandemic which never existed.

Thus, as long as the Virus remains — and all commentators say it will remain forever — allowing the Italian people vote, would be a disaster!

Yes, a disaster to crooks who would be voted out, and replaced by political parties which would put them in jail for life!

Consequently, the President has acted outside of the constitution and entrusted Mario Draghi who is not an elected official, to form a new government.

Italians are outraged.  One YouTuber, seen below, said it succinctly.  In 7 minutes the President has brought democracy to an end in Italy, because, if you can stop elections for a pandemic which does not exist, you can always create new pandemics to prevent future elections.

Italy is in the hands now of the Lodge, no further elections are necessary, because that was the purpose of Democracy all along!

4 thoughts on “In 7 Minutes, the Italian President brings Democracy to an end in Italy”