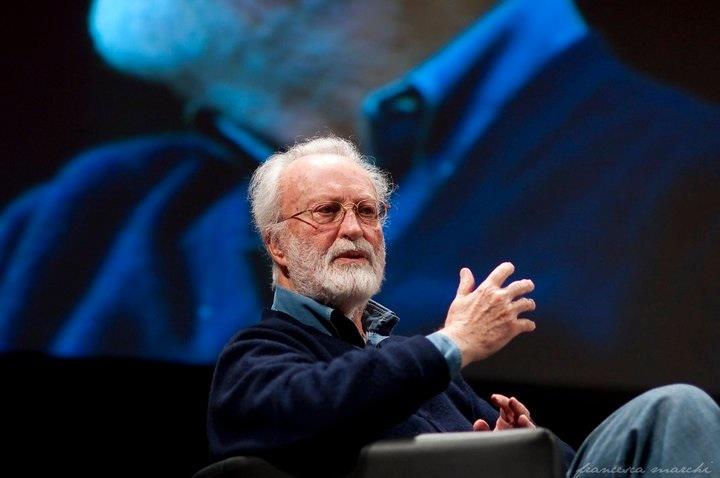 What is Going on Inside the Vatican?

At the age of 96, Eugenio Scalfari continues to bestow his pearls of wisdom upon humanity. And it appears that he wants to continue for a long time, because he is worried that the sun is going to burn out in less than 5 billion years.

In fact, in his writing that ranges from philosophy to literature, from politics to theology, he often ends his columns with a note of alarm that “the Sun – our guiding star – is getting old,” and even if “it will take millennia before we see a darkened sun” he, Scalfari, is worried. Apparently he thinks he will be present at the unpleasant event and is already thinking about what he will do.

Yesterday however he avoided his usual finale about the sun and, after writing about the relationship between Benedict XVI and Pope Bergoglio he ended with a surprise: “This is the future, and let’s not forget the elementary particles that revolve around the prince of Salina. We hope well.”

What does that have to do with anything? Is it an encrypted message? The usual, odd, literary evocation? To tell the truth, the entire article was surreal. However, given the personal relationship that Scalfari boasts of having with Pope Bergoglio (who at times seems to use their conversations to send messages about his highly advanced doctrinal positions), this piece is quite curious, also because Repubblica served it up on the front page with a very promising headline: “That understanding between the two Popes on the great themes of humanity.”

Scalfari opens solemnly: “In these hours an intellectual agreement is being confirmed of great interest in the Catholic Church and not only there. It is an agreement between two Pontiffs: Pope Francis and Pope Ratzinger.”

The article is accompanied by a photo of the two pontiffs at the consistory, but, apart from that photo (which does not mean anything other than a reciprocal courtesy), it is not clear what “confirmation” there was (and where and when) of an “intellectual agreement” since the pontificates of Benedict XVI and Pope Bergoglio are on diametrically opposed tracks, and also the pronouncements of Ratzinger, as pope emeritus, all follow the Catholic line of his pontificate and the pontificate of John Paul II: the polar opposite of the declarations and actions of Bergoglio.

Even “the great issues of humanity” on which, according to Scalfari, they supposedly agree, are not clarified, because they simply do not exist. For Benedict XVI the greatest tragedy of the present time is the cancellation of God, while for Bergoglio it is the climate….What could be more divergent…

Scalfari’s emphasis, however, is curious: Benedict XVI has “resigned from his former functions, but he is still the holder of his theoretical functions that will last as long as his life will allow him.”

I do not know if Scalfari realizes the theological complexity of the argument he enunciates and what a canonical mess it implies, but certainly it is significant if this concept comes from his conversations with Bergoglio.

Because it confirms that with his (mysterious) “step to the side,” Benedict XVI did not renounce the “Petrine munus,” and this opens enormous questions about what the current situation of the Church and the Pope is.

Scalfari even writes that “all the decisions of the highest importance that Popes can take will be and should be agreed to and actuated by both together.” But this has never happened in these eight years, and it would signify a shared papacy, a novelty of epochal importance.

Scalfari continues in an enigmatic way: he says that “a situation of this sort has never happened” (it’s true), but then he cites three names of popes as precedents (unless he is alluding to those of the Western Schism, and then this is a signal that it’s not flour from his own sack [Translator’s Note: i.e., that Scalfari’s material is being given to him by someone else].

He speaks of a “fraternal understanding between the two…already discussed for some time by the two present popes whose equality” would have been “recognized for some time in terms of thought, but not in such a formal and substantial way.” But what is he referring to? He is assertive, but he does not mention any public facts.

Scalfari adds that “today we can almost imagine the presence of two Popes who succeed in facing the great themes of humanity together.” Then he focuses on the theme of the Trinity, with an exhilarating finale about “diverse religions” for which “Francis and Ratzinger will share the task of having contacts.” The examples? “Think of the Waldensians, the Chinese, the Russians, the Irish, the Turks (are the “Irish” or the “Chinese” supposed to be religions?).

It’s difficult to make heads or tails of anything in the midst of such confusion. But perhaps “Cardinal Scalfari” has heard something. Bergoglio in fact has now exhausted his pontificate, which is now engulfed and dramatically divisive within the Church itself. Is it plausible that he is deluding himself with the idea of relegitimizing it in the coming months using the authority of Benedict XVI? Or in Bergoglian circles is there such a great fear of Benedict, whom an ever-greater number of believers sees as the “true pope” and the true lighthouse?

Scalfari reports confusedly on strategies that he has heard talk of, and he refers to the prince of Salina, the protagonist of [Tomasi di Lampedusa’s novel] Il Gattopardo,” which seemed pertinent to him. But what does he mean by “elementary particles?” Is this an allusion to indivisibility? What is happening inside the Vatican?

One thought on “Antonio Socci: “Cardinal” Scalfari reveals that Benedict is still the Pope!”