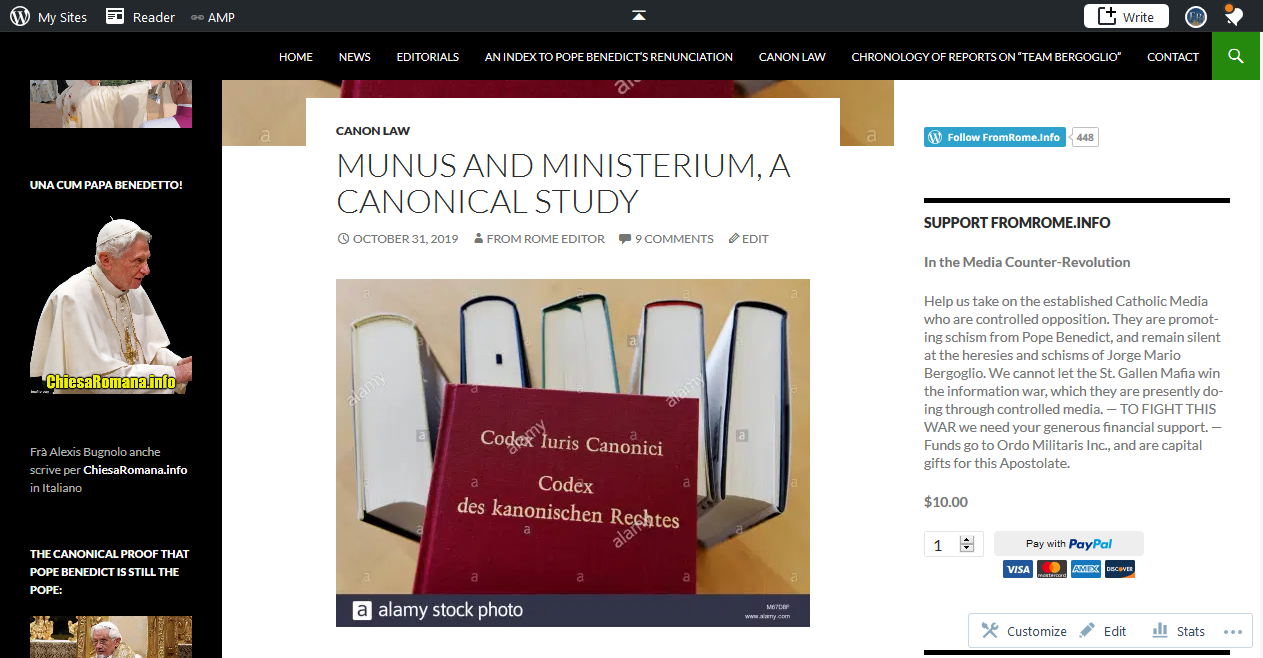 March 16, 2020:  Bergoglio just published a new law for Vatican City regarding the organization of courts and police forces and offices of investigators.

Notice was given in the official Bulletin of the Vatican Press Office, which also published the text of the law in Italian. While I recognize that Bergoglio has no legislative power in the Vatican without express delegation by Pope Benedict, nevertheless, I took a look at the law to keep abreast of the latest news at the Vatican.

And there is where I found that the goose had laid the golden egg. I speak of Article IV, which reads:

The ordinary magistrates (of Vatican courts) are Vatican citizens during their munus.

The Latin phrase, durante munere, refers to canon 1484 §1, which I spoke about at the Academic Conference in October, on the Renunciation of Pope Benedict XVI. I quote, here, from my talk on Munus vs. Ministerium: A Canonical Study:

Third, as regards to the distinction of munus and the fulfillment of a duty of office, there is Canon 1484, §1 in regard to the offices of Procurator and Advocate in a Tribunal of Ecclesiastical Jurisdiction:

Canon 1484 §1.  The procurator and advocate ought to deposit a copy of their authentic mandate with the Tribunal, before they undertake their munus.

Note here, significantly, that the Code associates the mandate to exercise an office with the undertaking of the munus (munus). Negatively, therefore, what is implied by this canon is that when one lays down his mandate, there is a renunciation of the munus.

The argument about munus meaning ministerium has just received a major blow to its hull and is now taking water at a rapid rate.  What I said in October in my paper at the Conference, has now received approval by Bergoglio in publishing this new law.

Those who believe that Pope Benedict XVI has validly resigned his office, have a major problem on their hands. Bergoglio himself has used munus to mean office. He did not use ministerium. The Latin phrase, durante munere, means so long as he remains in office, or if you like, for the duration of his munus.

But Pope Benedict XVI did not renounce the petrine munus, so He too is pope durante munere.

One thought on “Bergoglio just admitted Benedict is still the Pope”