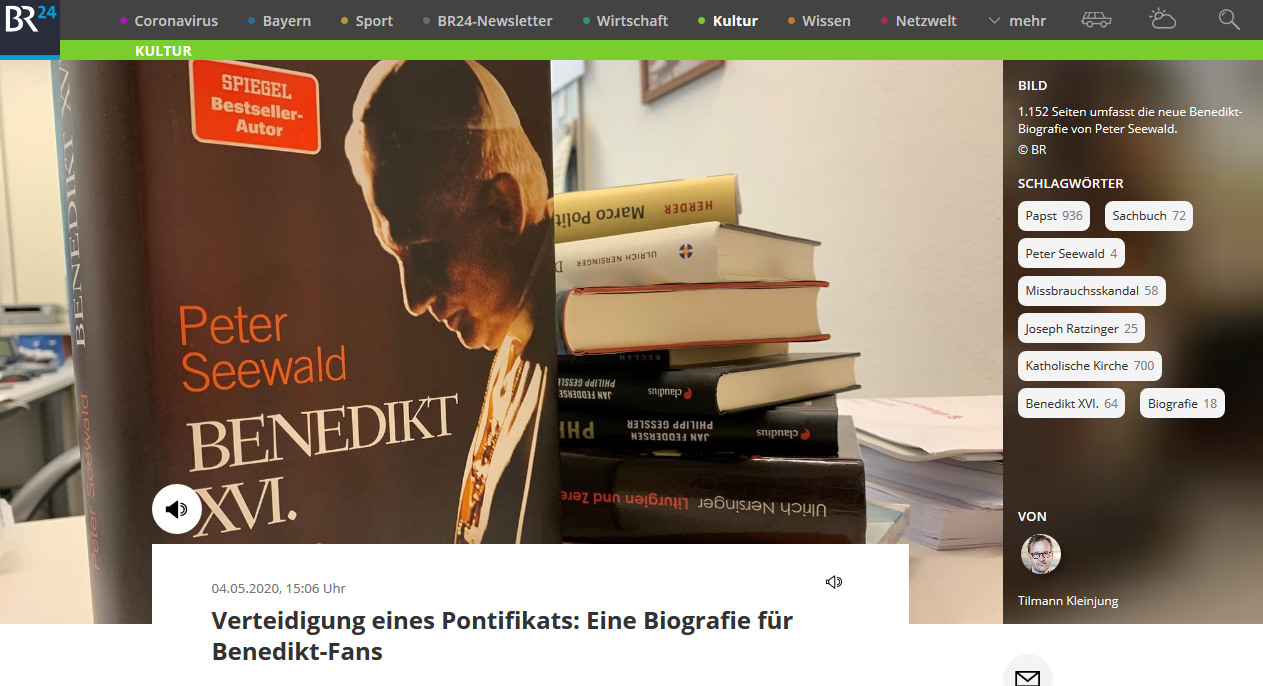 Having read many reports regarding Peter Seewald’s new biography on Pope Benedict XVI, it is clear that it provides no new light on what happened on Feb. 11, 2013. While the entire Book needs to be read to make a certain determination on this, let us review the major reports about the book to show that this is most likely a correct assessment of its contents.

The German Press ignores the Renunication

DomRadio.De in its report of May, 4, 2020, entitled, Peter Seewald legt neue Biografie von Benedikt XVI. vor 1.184 Seiten über den früheren Papst (Peter Seewald publishes a new Biography on Benedict XVI: 1184 pages about the former Pope) does not even speak of what happened using the correct terms, but does reveal that the Pedophilia Crisis was the cause of the decision:

Resignation from the papal office

Or for the reform process of the “Würzburg Synod”, which he left without saying a word in 1974 when he realized that he could not influence him in his understanding. And also for the surprising step with which he has secured a place in church history for all time: the resignation from the papal office (Papstamt) and the entry into the office (Amt) of an emeritus pope, which he invented.

Seewald describes the departure in the life of the 93-year-old with empathy, he usually protects him against criticism. He always provides really new insights when he draws from personal conversations with the old pope (or with his secretary).

Such a very last, mostly written interview in autumn 2018 is the final chapter of the book. In it Benedict XVI. with old and new arguments, why he decided to resign in 2012 and how he understands and exercises the spiritual office of “Papa emeritus” (Amt de Papa emeritus). With a bit of bitterness, he also rejects the sharp criticism of his public statements.

One of the strongest chapters of the book with 1,150 pages of text and a detailed picture section includes the description of the abuse crisis and other scandals in the late phase of the Benedictine pontificate, which then led to the decision to resign – without having triggered this step, however, like Seewald and to insure his protagonist. The description of the meticulous preparation of the world-shattering event is exciting to read. Now you know who was informed when and how they managed to keep the sensational plan secret for months.

This report is uninformed, because Benedict XVI never renounced the Papal Office (PapstAmt) he only renounced the Petrine Ministry (PapstDeinst), as anyone who can real Latin can see. Evidently the author of this article cannot read Latin, but followed the German translation available on the Vatican Website, which I have shown to be falsified, and which our German correspondent showed was most likely subsequently manipulated by an English speaker.

Br.de suggests that no other information will be found in the Biography, which was written to defend Ratzinger and which contains interviews with more than 100 individuals:

Defense of a pontificate: a biography for Benedict fans

A book about Benedict XVI. for fans of Benedict XVI: The new Pope biography by Peter Seewald is told in an exciting way, but in an obvious effort to defend Benedict. There is only criticism of the pontiff in small doses.

In 1993 Peter Seewald metCardinal Ratzinger for the first time. Peter Seewald was supposed to write a portrait for the Süddeutsche Zeitung magazine about this man, who was perceived in Germany primarily as a “tank cardinal”: Joseph Ratzinger, then prefect of the Roman Congregation for the Doctrine of the Faith, must have liked the encounter and the resulting article.

Because Seewald accompanies Ratzinger even after the papal election. He was the only journalist who managed to have a detailed discussion with the Pope and to publish it.