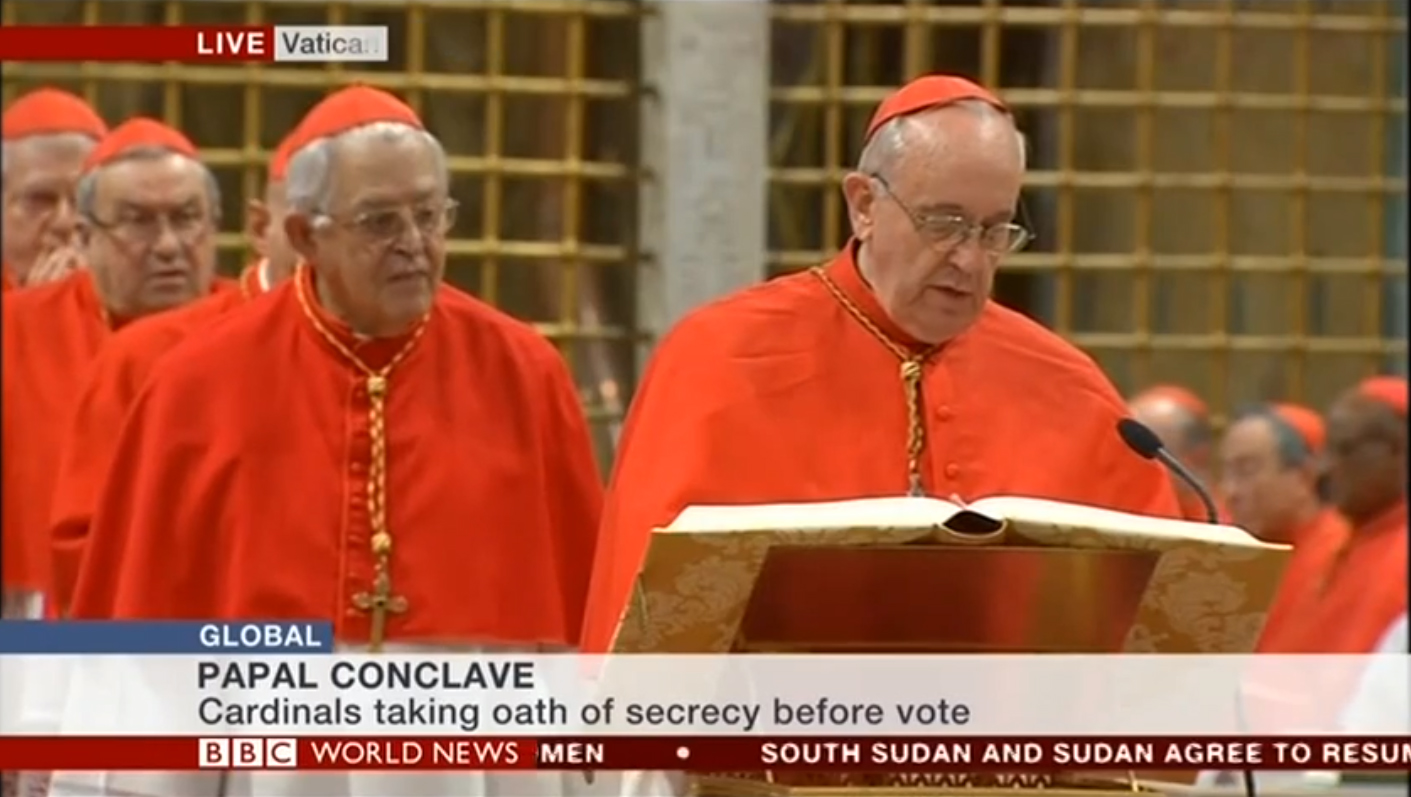 The real reason why the Cardinals of the Roman Church will not tolerate or permit a public discussion of the invalidity of Pope Benedict’s Declaratio of Feb. 11, 2013 to effect his loss of the papacy, is that as a result of insisting on their own will, the College of Cardinals has thereby lost the right to elect the Roman Pontiff.

Such a truth is unspoken, but it is the proverbial Elephant in the Sala Clementina, of which no cleric is willing to speak.

They won’t speak of this because if the Faithful come to know of this truth, then the Church’s liberation from the Globalists who engineered the putsch of Feb. 2013 is certain!

For this reason, I consider it necessary today, on the 8th anniversary of that fateful day, to declare it publicly from the Eternal City so that no one in the Church can say it is not so when that fateful day arrives.

And this truth is not one of opinion, nay rather it is the Magisterial Teaching of Pope Benedict!

For it was declared by none less than Pope Benedict XVI on Feb. 11, 2013. And He did so, not secretly, but in the light of all the world, in the very first sentence of his Latin text, when he said,

And the reason why the Cardinals and the Vatican have presented false translations of the Declaratio is chiefly because of what this phrase means.

Here is the true and authentic English translation of that text:

No only have I convoked you to this Consistory on account of these acts of canonization, but also so that I might communicate a thing of great moment on behalf of the life of the Church: YOUR BEING CUT OFF.

That is actually what the Latin says. And obviously that is why the translations present it otherwise.  They pretend that Pope Benedict wrote the Latin word vobiscum instead of vobis. And if you know anything about Latin, you know that the alteration of one word can change the entire meaning. Here it does so emphatically.

But the canonical explanation of how Pope Benedict XVI’s declaration cuts the College of Cardinals off from the Church and thus excludes them from all future right to elect a true Roman Pontiff is had elsewhere.

For the consequences of electing another as Pope during the life of a Pope is an act of schism. And when the Pope has not renounced his munus, then the Cardinals who enter into a conclave to elect another, having failed to determine the validity of the renunciation and the legitimacy of the sede vacante as the Papal Law Universi domini gregis requires in n. 37 of that law.  And this is a fact of which they cannot be ignorant, since in the same Papal Law in nn. 13 d, 15, 21, 53, and 80 the term munus is expressly used for office.

Indeed, in n. 53, the Cardinals are required to VOW OBEDIENCE to the man who is elected Roman Pontiff and to confess that he holds the MUNUS PETRINUM!

So on all sides, the Cardinals are condemned, if they elect another, when the Pope has not renounced his munus.

Consequently, in electing another they not only elect an Antipope, not a true pope, but they enter into the most formal schism possible.

And such a schism is punished immediately and automatically in virtue of Canon 1364 WITH EXCOMMUNICATION.

Consequently as excommunicated they cannot exercise any office in the Church, and thus neither the election of another Roman Pontiff!

1331 §1 The excommunicate is forbidden

n. 1 to have any ministerial participation in celebrating the Sacrifice of the Eucharist and/or any other ceremonies of worship.

n. 3 to exercise any ecclesiastical offices or ministries or munera at all and/or posit acts of governance.

Hence it is that after 8 years of contumacy in their sin, there is now absolutely no doubt that they are pertinacious and of full consent for this crime and hence lose the right to elect the Pope.

Moreover, since there has no been admitted uncanonically into their membership numerous men whom Pope Benedict XVI and John Paul II never raised to the dignity of the Cardinalate, if so much as one of these fake Cardinals enters a Conclave, the Conclave will be invalid, as per the Papal Law of John Paul II.

And that means they, individually, and collectively have lost, the right and the capcity to elect Pope Benedict XVI’s successor.

And this was foreseen by Pope Benedict XVI on Feb. 11, 2013, when at the end of his document he said, that a new Conclave be called by those who are competent. He did not say “by the Cardinals,” even though nearly all of them were sitting in front of him at the time!

*  This canon also explains why the Catholic Faithful should NOT attend any Mass where Bergoglio is named as Pope in the Canon. Indeed to do so is at least tacitly participate in Schism.  And the crime of schism is punished with excommunication from Jesus Christ and His Church, apart from which there is no salvation.