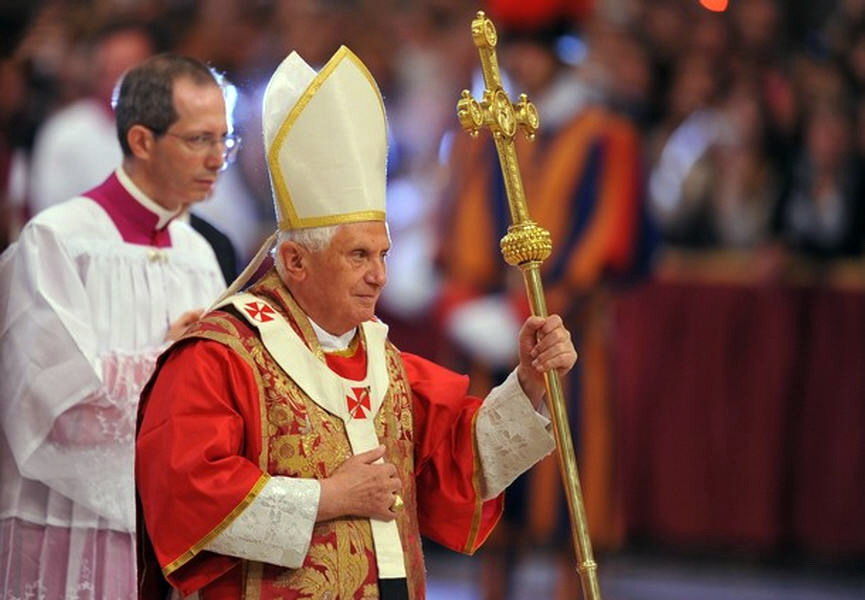 It has been 8 years since the day when Pope Benedict XVI renounced the ministry which was committed to him through the hands of the Cardinals. An act which according to Cardinal Arinze was well thought out by His Holiness. An act which Archbishop Gänswein said the Holy Father prepared for since the summer of 2012.  An act which Pope Benedict XVI in his biographies by Peter Seewald declares to have been inspired by a mystical experience which lasted for weeks.

Looking back over all those years we can see that Pope Benedict XVI has not changed his view of things.  Indeed, from the beginning his grand strategy has been the same: to do that which Saint Pius X declared was the duty of all Catholics, namely, to rip off the masks of those who are Freemasons and traitors to Christ (cf. Pascendi dominici gregis, n. 3)

I say this because, as was revealed in the summer of 2019 by an Argentine priest who is close to Jorge Mario Bergoglio, Pope Benedict XVI in the summer of 2005 offered to Bergoglio the post of Secretary of State. And as I surmised in my 7 part Documentary on the Renunciation, The Facts, the Laws and the Consequences, this offer by Pope Benedict was his way of discerning whether Bergoglio wanted honestly to reform the Vatican, as it needed to be reformed, or whether he wanted to change the Catholic Religion, because as Secretary of State he could do the former, but as Pope he could do the latter. — And Pope Benedict XVI made this maneuver on the basis of what was being said by the St. Gallen Mafia in the Conclave of 2005.

This, in repackaged form, is the fundamental strategy of Pope Benedict XVI on Feb. 11, 2013: to renounce in such a way as to make it appear to the St. Gallen Mafia that they could seize the Papacy, but in fact give them nothing more than the appearance of an office without any canonical power to alter the Faith or Magisterium: because with the ministry not the office of the Papacy renounced, Bergoglio was elected to nothing, and thus nothing, of what he does, he does as Pope, but everything which he does reveals the agenda of international Freemasonry which backs him from the deep pits of the CIA and the Masonic Banks of New York City.

And the summer of 2012 was an apt moment for God to reveal this course of action to Benedict, because it was in that summer that the British government declassified its WW2 archives which showed how deeply compromised the Vatican was with the Fascists, Nazis and CIA during and after the war.  Such news would certainly have made a man of moral integrity like Pope Benedict XVI sick to his stomach with the Vatican apparatus.

And thus, Benedict resigned the ministry, but not the office of the Roman Pontiff, fooling the wicked and witless.

In this way Benedict has defeated “Francis”, as I explained in my popular essay. And Benedict XVI is truly the greatest 3D chess player on the planet. After Feb. 28, 2013, he need say nothing more, and all that he has said has been to hold the line on what he did, so that those with faith and common sense would inevitably see it, and those with greed and lust would in their blindness refuse to see it.

And all this because Pope Benedict XVI is at war with the Church of Pedophiles. A thing he made clear at the death of Marcial Maciel (the sexual monster who founded the Legionaries of Christ, who not only raped seminarians, but even his own illegitimate sons!) when all the Roman Curia went to his funeral at St Paul’s outside the walls, here at Rome, and he alone refrained.

This is the truth of truths about what is going on in the Church. All the Cardinals arrayed against him are on one side, and Pope Benedict XVI is on the other. He says nothing to them about what he has done because he follows the teaching of Our Divine Master who says not to throw pearls to swine.

All those who intellectually or morally are controlled or subordinated to the Church of Pedophilia or the Deep State, its puppet master, continue to vociferously defend Bergoglio.

But all men of integrity who take their stand on the truth, say that Pope Benedict XVI is the true Pope.

While there is still a lot of confusion out there, because so many have been blue pilled by a vast international conspiracy of liars and pedophiles, more and more Catholics and non Catholics each month come to the truth.

The Catholic Church will publicly declare soon, that Benedict XVI has always been the true Pope and that Bergoglio never was. Because, by the Holy Spirit’s working She has ever been the nursery and home of all men of integrity who bow to the truth of things and break free from all the bonds of sin, lies and the flesh.

And it will be soon, because Bergoglio has not long to live and Melanie of La Salette tells us that the Sun of the true Pope shall shine again. (An Article which so terrorized the Vatican that Bergoglio’s sciatica operation was cancelled the next day.)

So Pope Benedict XVI will go down in history as the greatest strategist and liberator of the Church since Pope St. Gregory VII’s war against Investiture in the eleventh century. He has had extraordinary confidence in the Holy Spirit and he has put extraordinary trust in the Faithful. He has, by the divine power of the Office of St. Peter, forced the hand of the enemies of the Church and caused them to reveal themselves. And He has by divine inspiration given us all the greatest challenge to our faith, which was the only way to liberate us from the decades of lies under which we labored: a challenge which invited and invites us to live the faith authentically and personally and consciously; a challenge which makes us warriors for the truth and prepares us for the tremendous battles which lie ahead.

And in this Pope Benedict XVI has acted in fulfillment of the Divine Voice in Revelations  18:4, “And I heard another voice from heaven, saying: Go out from her, my people; that you be not partakers of her sins, and that you receive not of her plagues. ” For truly, by this act of Pope Benedict XVI the Church of the Light has been separated and distinguished from the Church of Darkness: the great dicessio, of which Tychonius spoke in the early Church, and about which he himself spoke as Pope.

The Faithful in the mean time can take comfort, in advance, for as St. John the Evangelist foretells and reminds us, those of the latter “Church” with its false prophet are soon to be cast into the everlasting pit of fire.

CREDITS: The featured image of Pope Benedict is used under a CCSA license as described here.