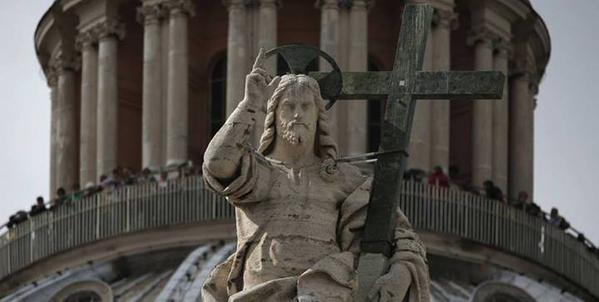 The so called “Pandemic” has caught Christians off guard. And many do not know how to react to it, or even what to think.

It has caught many off guard, because most Christians are entirely ignorant of what the obligations and consequences of believing in Christ are.

Most Christians do not know how to react to it, because they are confused by very poor instruction on the question of when and when not to obey the State.

Many Christians do not even know what to think about it, because many Christians were never taught that Faith in Christ requires that you think and discern about everything which makes demands upon you.

It has also challenged Christians, many of whom do not understand the most basic doctrines regarding life and health and the purpose of each.

For all these reasons, it is necessary that Christians, as Christians, confront the problems presented by the “Pandemic” with the truths of our holy Faith.

And we should begin with the basic truths.

First, that there is a God, and He is good. As Christ Jesus teaches us, “Call no man good, because God alone is good” (Mark 10:18) — God is the very definition of Goodness. He is everything that ultimately and completely satisfies every spiritual and rational being, angel or man.

Second, that this good God is the Creator of all things.  And thus all things are good, as Genesis 1:31 declares.

The conclusion a Christian should draw from these 2 truths, is that we should not be afraid as if nature itself were our enemy. God cares for all and we are in His Hands.  Therefore we should not give into the preachers of irrational unlimited fear.

The third truth is that God is the Creator of man. He is the Creator of our genome, our immune system and all that we are. He is also the Creator of all viruses and germs. And He does not intend to destroy the world by them. — So if anyone claims that a species of virus, like corona virus, which for decades has been known as non-lethal and incapable of being a plague, is now a plague, he is simply blaspheming God with a lie.

Discernment is not uncharitable, but rather a necessity of Christian living. Because we must put things and men to the test to see if they are true, so as not to be led away from Christ into error or sin.

Fourth, since there is only One God, the Lord of Heaven and Earth, we must not give the State the authority of God, nor regard Politicians or Journalists as infallible sources of truth. For some men are so proud that they would set their mouths in the Heavens and dictate their “truth” to mankind (Psalm 73:9).

Indeed, it is a sign that the spirit of the Antichrist has entered into a man when he dares declare as truth those things which are blatant lies and impugn the Majesty  or Goodness or Sovereignty of God.

And this is what the Scamdemic does, because it claims that infection and disease is everywhere, and that we can only acquire true immunity through man made artifices, as if the good God, our Creator, has not given us all that which is necessary, to defend against the common cold, in the immune system He has created in our own flesh.

Take note: since Sars Cov 19 has never been isolated, there is no scientific confirmation that what people do die from is a common non-lethal corona virus, or a variety genetically engineered in a biowarfare laboratory.  The story about the Wuhan biowarfare lab was a necessary Narrative Device to get everyone to fear Covid 19, because otherwise, there is no reason to fear a coronavirus, as all medical journals for 40 years have declared, since they are either highly transmissible and not lethal, or lethal but no highly transmissible. — That the virus has not been isolated therefore proves that the Narrative would fall apart if it were.

Also, Christians need to inform themselves about real science. Before the Pandemic was declared all medical journals affirms that plagues and pandemics burn themselves out as the general population acquires immunity withing 6-12 weeks of exposure. This happens because most of us are infected with very small doses of the pathogen and thus our immune system overcomes the invaders easily.  To claim therefore that after 12 months there is no acquired immunity by anyone is simply a FAT OUT RIGHT LIE.

And if you watched the news closely, when this “Pandemic” was declared there were numerous reports of blood tests in different parts of the world all of which confirmed that herd immunity was had in most countries by February through May of last year. Thus there never was a reason to continue a Covid Response. But these reports now have been forgotten, since they want us to fixate on the “Vaccine.”

But many Christians have been fooled, because they judge what is true or false not on the basis of fact, but on the basis of human testimony. And thus the promoters of the Scamdemic by getting doctors to tell family that their loved one died of Covid, even when they did not, has caused some Christians to become apostles of the virus narrative, even though they never asked for any proof that their loved one had Covid 19.

To maintain the lie, too, there has been employed swab or PCR tests, the inventors of which all declare they are unreliable. And some are such fools to not only take the test but believe its results.

At the same time, as the 24/7 terror campaign on Television, Radio and in the Newspapers, there has been the legal obligation to submit to the lies by wearing external badges — diapers on the face — and observing Pharasaical laws on hygene — such as wearing the diaper in the bathroom but not at a restaurant table while seated, or keeping 1 or 2 meters distant from every human being.

A Christians is obliged to discern. And a Christian who sees a lie, but ignores that it is a lie, is failing in his faith and has fallen away from Christ.

For if the State simply threatened us to wear the mask and observe distancing laws, without reason, it would only be cowardice to obey. But when the reason is a lie, then it becomes the public profession of a lie to obey. And thus by wearing the mask, we affirm for others that there is a pandemic and that they need to believe in it.

And that is how the Scamdemic is diabolic. Because all those who profess a lie, who believe a lie and who tolerate a lie will be cast in to the pit of fire with Satan and his devils on the last day.

As Christians let us be true prophets and preach by word and deed against this international conspiracy of liars and cowards. Let us not take part with the False Prophets and Antichrist who have cropped up like the morning flowers of the field, and who shall soon wither in the passing day.