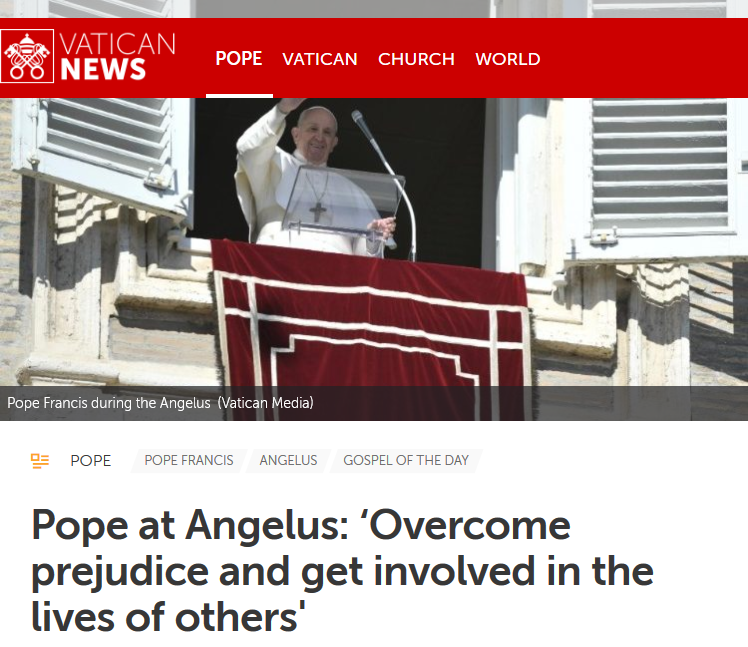 The perversion, heresy, bad will and deceit of Jorge Mario Bergoglio is not unknown or new. Nearly every time he opens his mouth it is evident.

But now Bergoglio feels sure of himself enough to start laying down the principles by which sodomy is to be publicly approved by his damnable globalist Anti-Church.

He preached them during his Angelus sermon on Feb. 14, 2021, for St. Valentine’s Day, and had his remarked published in English by Vatican News, so that no one can say he was being misinterpreted. What Bergoglio attempts to do is to imply that when Christ touched the leper that He was teaching that all sexual experiences were acts of love, even when they transgress moral norms.

His teaching is both CONSUMMATE BLASPHEMY against the Son of God and UTTER SACRILEGE of Sacred Scripture.

In the Middle Ages such a discourse would get your burned at the stake. And that he gave such a discourse on St. Valentine’s Day shows that he means to apply it to bolster the false claims of the Masonic Lodge (which has always promoted pedophilia and sodomy), that “love” means doing whatever you want.

Bergoglio has arrived at the end of humanism, where man becomes God and God is instrumentalized to justify the most based and unnatural disorders.

But if you say this, the Lavender Mafia will say that you are unreliable and reactionary, unkind and that you offend the Blessed Virgin for not being sensitive to others!

In other news, my contacts in the Vatican City say that Bergoglio’s health is seriously declining and that the prognosis is that he will not live past 2021. This is perhaps is personal motive for his coming out on St. Valentine’s day: a penultimate act of rebellion against all mores and God, to guarantee that he does not end up where he does not want to arrive.

8 thoughts on “St. Valentine’s Day: Bergoglio signals that perversion is an act of love”