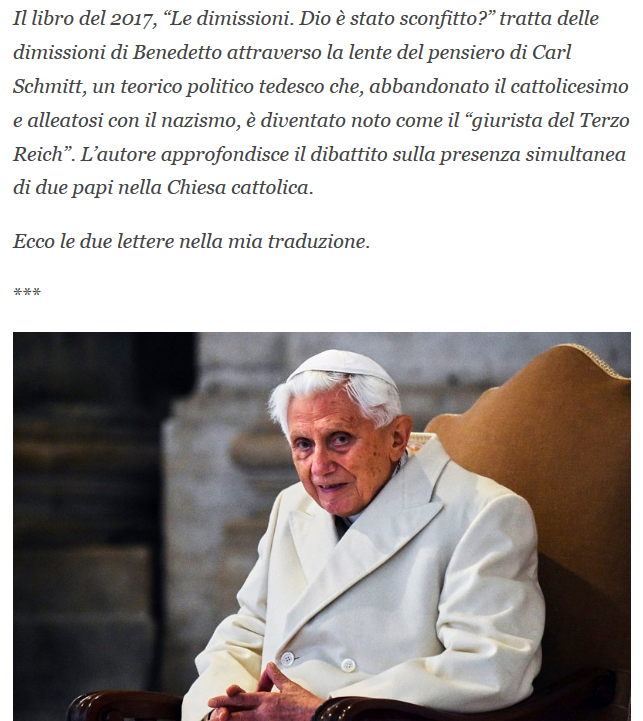 In 2017, we are told, Pope Benedict XVI wrote a private letter to Cardinal Brandmueller to explain what he did on Feb. 11, 2013.

You can read the original German and an Italian translation of the letters, by clicking the image above.

The articles published about these letters all aim to demonstrate that Pope Benedict XVI himself chose the title Pope Emeritus to signify that he is no longer the pope and that his renunciation was valid.

But the letters have 2 glaring problems.

So, I have to laugh when anyone cites these letters as proof that Pope Benedict XVI is not the pope, therefore.

But if you look at the argument in the letters, it is just as convincing. Because therein, it is made to appear that Pope Benedict XVI resigned in an entirely novel and new manner so that he could have, not like a mere cardinal, but as Pope emeritus, an untouchable position from which he could be protected from the press and all inquiries and requests.

That means that Bergoglio cannot rermove him from that position.

That means that Bergoglio does not have the authority to remove him from that position.

That means that Bergoglio does not have the authority to make him stop wearing the clothing of the Pope or signing as the Pope.

That means that Benedict XVI has resigned in such a way as to retain an authority highter than Bergoglio.

Now what authority is that?

He has not become Jesus Christ, who is the Head of the Church.

And yet he has more authority than Bergoglio.

But in the Church there is only one office which has authority below Christ and above every other Bishop by every other name.

And that is the Vicar of Christ, the Pope.

So that means, that Bergoglio is not the Pope.

And that means that Benedict, XVI, in wearing white and signing “Benedict XVI P. P.” is saying that he is still the pope.

Or it means that he is confused and thinks he is not the pope but has an authority above the pope.

But if we look at his act, he clearly renounces the ministry of the Pope, but not the munus of the Pope.

But the munus is the source of the authority.

Therefore, Pope Benedict XVI remains the pope, whatever his intentions are.

Well if he has to write a letter to Cardinal Brandmuller 4 years after he resigns whatever he resigned, to explain it, when the Cardinal lives only a few hundred meters away and can speak to him, then, yes, he admits there is public and manifest and lasting confusion.

Therefore, his resignation was not duly manifested.

Therefore, his resignation did not meet 2 of the criteria necessary for a papal resignation, namely, that he renounce the munus, and that it be duly manifested.

Therefore, his resignation never happend and is not valid.

Therefore he remains the pope.

And thus, the letters to Brandmuller are bandages which do not work, but try to cover the problem.

2 thoughts on “The Bandages to the Invalid Renunciation”