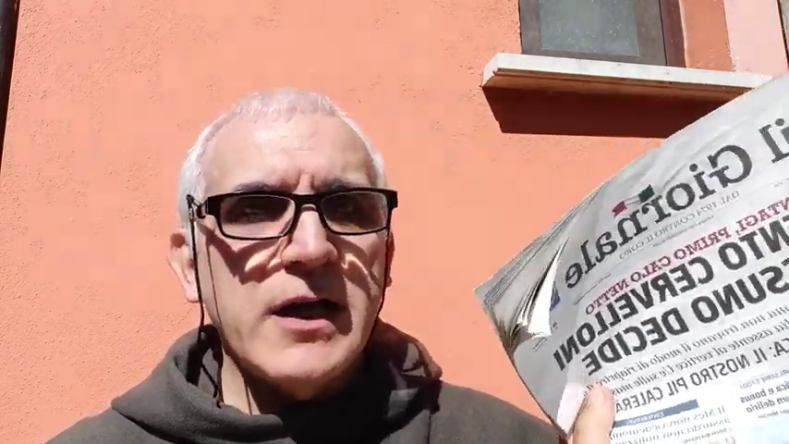 In Italy, more and more Italians are opting to not wear a mask, not obey the curfews and not to require the mask or social distancing in stores and eateries.

The noticeable change of mind came just before Christmas when the Government of Giuseppe Conte (Skull and Bones associate) forbade Italians to go home for Christmas vacation and visit family and friends. That enraged the nation.

Thus, the fall of Conte’s government three weeks ago gave many hope that the madness of the Scamdemic would end. Indeed, Renzi announced that he was leaving the government because its sanitary decrees were unconstitutional restrictions on personal and constitutionally guaranteed liberties.

But in recent days, when it became clear that the new Government of Mario Draghi (Goldman Sachs) would return to lockdowns, Italians gave sign that they are fed up.

In December, the change was slightly noticeable. There was an increase of curfew breakers in small numbers but at rates of 100-300% higher than before.

In recent weeks, however, the numbers of curfew breakers have increased, and the frequency of their outings. The numerical increase is less, about 100-150%, but the freqency is nearly continual.

During the hard lockdowns of last spring only the drunks and drug addicts and aliens broke curfew. After Christmas, the dog owners came out after curfew.  Whereas, now you see tourists, students, and simply those who want some fresh air. Even young people going from apartment to apartment.

However, in recent days another sign of resistance is now widespread. At curfew no one is wearing the mask but a small percentage, say 10%. Even police outside of the capital, now, are not wearing the mask in their cars, and on the sidewalks.

Those pedestrians without such courage, are putting a cigarette in their mouth, to justify not wearing a mask.

The police stopped fining pedestrians in August. Now they only rarely find some driving without reason after curfew.

Two undercover police officers barked at me last week, asking me to put on the mask. I said, “Who are you to tell me to wear a medical mask?”. The more canine officer showed me his badge, and said, “I am, and I am asking you to put on your mask”. I replied, “I was born with my mouth open and I like it that way, because I can breathe.” He responded with some nonsense about the laws and sanitary decrees, I denied they were legitimate without the consent of Parliament. He threatened me with a fine, and I said, “I have filed criminal complaints against 14 police offers so far, and it will be my pleasure if you both are 15 and 16.” Then he told me to wait and he would come for me, while slamming the door of the store he was citing for no observance of floor arrangement for sanitary controls.

I went elsewhere, and 30 minutes later, when he and his colleague saw me in the street, they chose to avoid me. — Victory!

So, for all these reasons, I infer, as an Anthropologist, that the Scamdemic is loosing widespread credibility, and that the rate of control loss is increasing rapidly. I do not expect public compliance to last beyond this year. And that brings hope.

One thought on “The Scamdemic is loosing its grip in Italy”