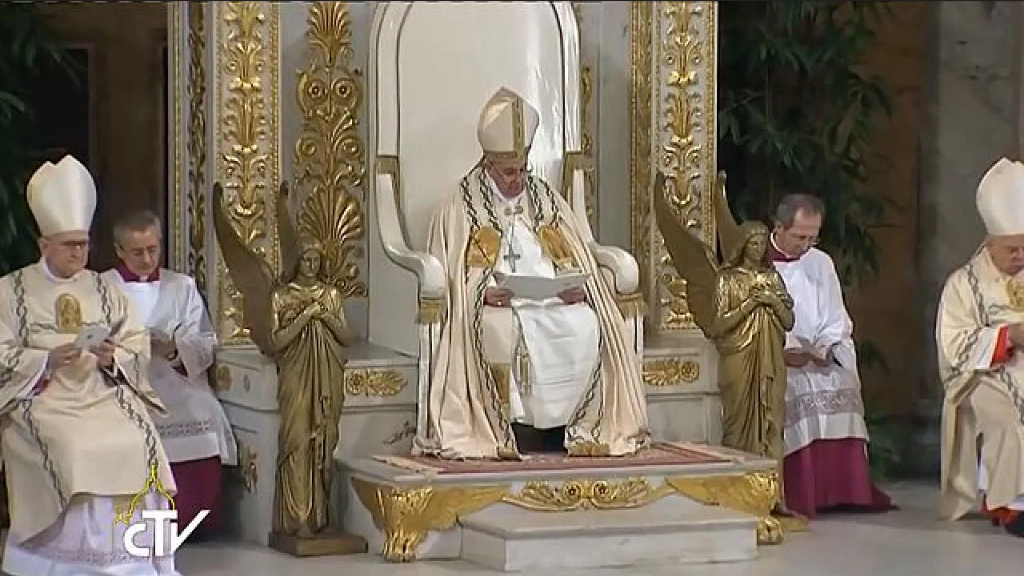 For eight years Jorge Mario Bergoglio has stained the Vatican with his outrageously, out-in-the-open heretical marxist blather, posing as the Roman Pontiff. And he has achieved it with nearly no opposition from the Sacred Hierarchy, because of the solidity of his power, a power over the minds of the Faithful which is founded upon deceit.

But that does not explain how it has gone on for so long.

Yes, while it is true that the conspiracy against the truth was victorious because of how deep and wide were the numbers of its participants, so that a vast number of the Faithful were deprived of the truth of what was happening, and for years and still on, many had no idea of what happened on Feb. 11, 2013 and what the laws of the Church said about it, nevertheless, this duping of the Catholic World would never have been achieved without a plethora of the lowest ranks, on Social Media, all Hell-bent on keeping Bergoglio in a position of unquestioned power, at all costs even of reason itself.

And the key individuals behind this are what I call “the Masters of Conceit,” that vast crowd of social media voices, few of whom name themselves with their real names, who advance repeatedly the same arguments of idiocy against the truth.

While I cannot discount that many of these might in fact not be Catholics, freely thinking, or even human, since we are living in the Age of the Obambots — paid political activists and services which alter Social Media content by supplying false information in coordinated world wide campaigns — I do not doubt that a good amount of the blather comes from Catholics whose conceit has been honed into a force which exceeds the rational powers of most other Catholics, and this to suppress truth, facts, evidence and misinterpret or reinterpret awry facts and ultimately history itself.

Thus, it is no exaggeration to say that these masters of conceit are running cover for Bergoglio. And they do so with a zeal which is exceeding that of Catholics for God Himself.

But I use the word, “conceit”, here with precision.  The Oxford Dictionaries defines conceit thus:

Excessive pride in oneself. ‘Smugness, conceit, an arrogance which has the appearance of humility.’

You encounter the Mastsers of Conceit on nearly every social media platform, whenever the unholiness of Bergoglio is pointed out. It is as if we are living in the tale of the King without Clothes, where any common sense Catholic who points out that the Fraud has no truth to back him up, is immediately pounced upon by the most garrulous trolls, posing as the high society and purity of the Catholic World.

To exemplify that of which I speak, I will cite a few comments from a popular blog, where the recent wave of articles criticizing the faked interview of Pope Benedict by Massimo Franco and the news of the recent publication of Attorney Acosta Ochoa’s book on Pope Benedict XVI being still the one and only true pope, has caused an epidemic of mental paroxyms, attempting to explain away reality itself.

Tim begins with a hypothetical question which regards the future, and from supposing a negative answer — gratuitously — concludes, without reason, that negligence by the Cardinals would demonstrate that Bergoglio is the pope  The non sequitur here is so great, that it is hard to see how to build a bridge of reasons over it. But the answer is clear to him despite his argumentation being devoid of any syllogistic structure or logic.

Here is another, which is so baseless, I wonder what the criterion is for getting your comment published at that Blog:

Somebody (Aliquis, in Latin) thinks about this from time to time, but evidently never so coherently. I believe they are confusing reminiscence with rational thought. But Somebody seems to me to be typing on his cellphone after several drinks at  Pub Alibi (Latin for elsewhere).

Here, again, is a consummate expert in the non-sequitur:

It baffles the mind of anyone who has read the headings in the Code of Canon Law how anyone could think that a Conclave could elect a Papal Legate, but I guess I am being too rational. Clearly who ever accepted this comment to be published has the greater sin.

And, finally, so as to not make you nauseous before your next meal or after your recent one, today:

Sadness in the face of rationality and expertise! here we have the very quintessential attitude of a Master of Conceit. It simply cannot suffer that another person have a rational thought, or be able to write out an argument, let alone one which is irrefutable. Truth is worth less than the time taken to read a page to defend it. Oh the conceit!

I have picked these from only one post on only one blog, but perhaps in future ages some historian of stupidity and inanity will plow through the sewers of Social Media during the last 8 years to catalogue all the arguments advanced to keep Bergoglio in power. Advanced always by persons who have not the smallest doubt or shred of self criticism of their own unparalleled thought and intellectual capacity.

But, when you reflect upon the fact of law and history, that this entire controversy is ended by simply recognizing that 2 Latin words (munus & ministerium), which according to canon 17’s import, can never mean the same thing, do not mean the same thing, then you encounter the laughable affair and epitome of folly in which so many talking heads and commentators on social media, while NOT being willing to lose their souls in order to gain the whole world, yet ARE willing to do so for a single word!

It is thus, that Bergoglio has been enthroned upon conceit.  And that throne is solid in so many quarters of the Church since what Bergoglio represents, is so deeply desired and wanted, by those who would have what he offers, or by those who delight more in hating and exsecrating God, the Faith, and Godly authority, than they do in loving the Truth and seeking the Light and Liberty which He bestows upon all His faithful Disciples.

However, for truth sake, we cannot exclude the fact that a good number of clergy are simply idiots, unlettered, or emotionally incapable of mustering opposition to superiors who are either liars, frauds, or ignoramuses.

So I conclude by urging one and all to keep preaching the truth and praying for your fellow Catholics, especially for the clergy, who walk in the vale of darkness and are totally insensible to the  need for the Light.

CREDITS: The Featured Image is the lead image in this article about Papal Thrones, where the author, Theressa Zoe Williams, has intentionally featured only Bergoglio upon a throne — which looks like a bathtub– as if the Apostolic Throne belonged to him alone. Another case in point.