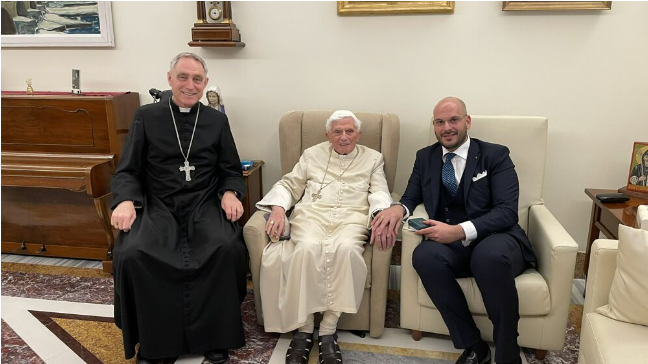 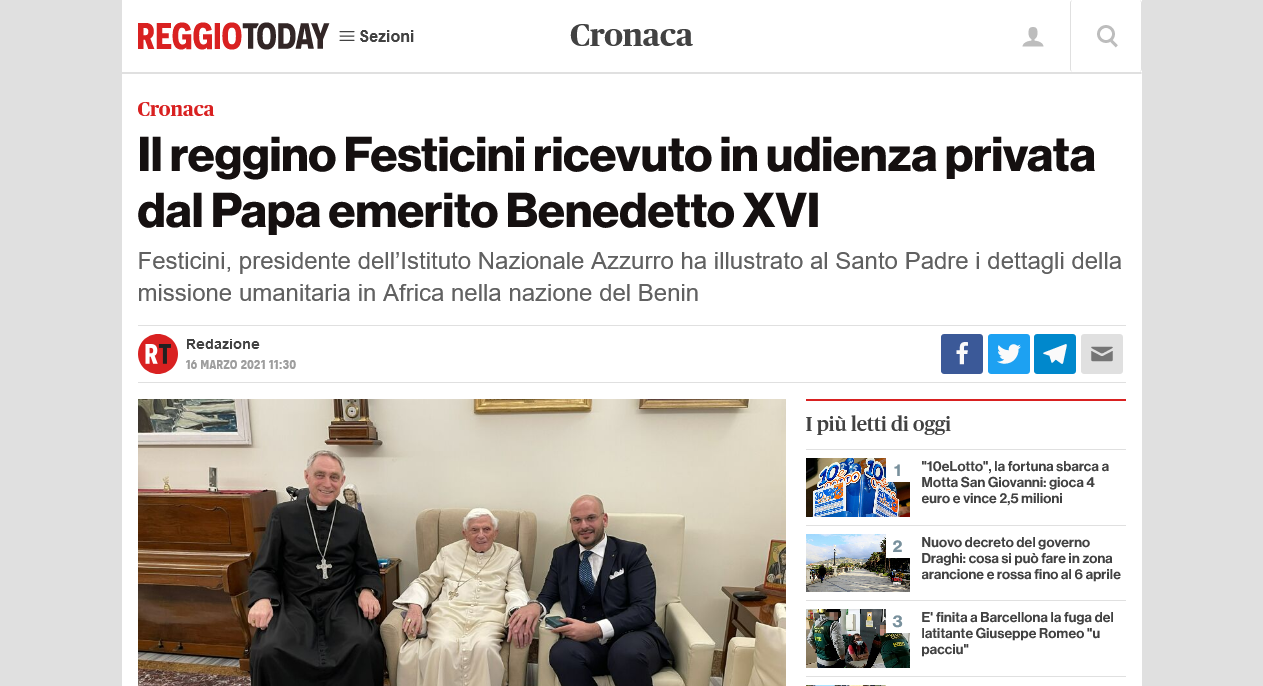 March 16, 2021: His Holiness Pope Benedict XVI totally demolished the claims of Massimo Franco of La Stampa, who at the beginning of this month claimed to have held an interview with Benedict which confirmed that Bergoglio is the pope.

In his own quite way, he did so by granting an audience, yesterday, to Lorenzo Festicini, who heads a non profit which aids the poor in west Africa and a photo op. — It is standard practice to grant a photo op to visitors of state and friends. No photo op, as with Massimo Franco of the Stampa means unwanted guest, at best.

From the photograph, it appears that the meeting took place at a little before 6 PM, Rome time. Pope Benedict XVI is seen wearing his Papal white soutain, his pectoral cross, his papal ring and stuchetto (hat) and the sandals of the Fisherman. He is also genuinely smiling.

In the course of which encounter, it is reported in the ReggioToday, that Pope Benedict XVI named him a humanitarian Ambassador:

Due to the importance of this news, FromRome.Info publishes here an English translation:

The Holy Father emeritus having listened to the words of president Festinici, wished to impart his blessing and his nomination of him as “Ambassador of Peace in every part of the world, in the footsteps of the teaching of Cardinal Bernardin Gantin of recent memory.”

Francini is president of the Instituto Nazionale Azurro, a humanitarian aid organization. Cardinal Bernardin Gantin was an Archbishop from Benin, who was Cardinal Bishop of Palestrina, when he died on May 13, 2008.

As for the article, it is not clear if the editor used quotes in the Italian around the word “nomination” to conceal their shock or cite Pope Benedict XVI verbatim. I think it is obviously both.

For those who have not noticed. the naming of an Ambassador is an act of a monarch who still holds all his authority and office.

Now for those of you who think that Benedict believes that he is not the pope….slap yourselves in the face, please!