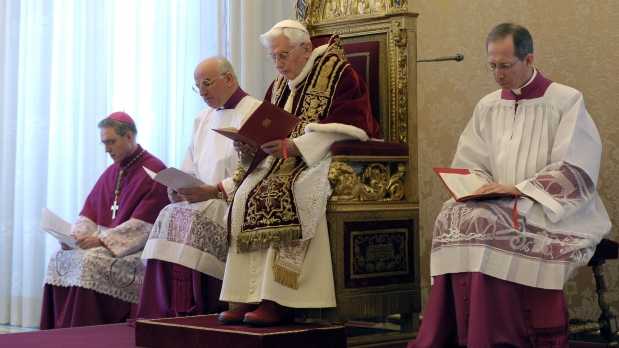 March 17, 2021 A. D.: Twenty of the top jurists in the Catholic Church have gone silent. None was willing to say or demonstrate that Bergoglio is the Pope, or that Benedict’s Renunciation is valid. Moreover, they will not even say what are the canonical principles for a valid renunciation.

The remarkable lack of responses is the finding of Andrea Cionci of the Libero Quotidiano who personally contacted each of the 20 jurists, present and emeriti, of the Sacred Roman Rota. His question was on the principles of ecclesiastical jurisprudence, in itself, but its implications were obvious: who is and who is not the true Pope?

Here is the Question that Cionci proposed to the jurists, presented here in English translation. For the original Italian, click on the image above.

“Granted that only the Pope has the authority to interpret is own acts (something which he must always do by means of a written legal act), would the papal monarchy fall into a state of doubt in the case of an ambiguous renunciation, since the Faithful would not have one to whom to turn to eliminate such a doubt?

“Hence, according to this principle, would a pope elected in a doubtful manner be the Pope?

“And, on the contrary, would a pope who had renounced in a doubtful manner, still be the Pope?”

The implications are clear: the Church is indeed in a crisis over the validity of the Renunciation of Pope Benedict. Otherwise, all or at least one of these eminent jurists would have replied to discount the doubt by explaining how the principles do not apply to the present case.

But so great is the fear and terror and uncertainty in Rome these days, that not even these most eminent canonists have the courage to speak.

One must conclude, therefore, that the Renunciation is invalid, and that Bergoglio the usurper and anti-pope is both threatening the members of the Roman Rota to keep quite, and that they all despise him sufficiently to remain quiet and not speak in his defense.

To this, I say:  Long live Pope Benedict XVI!

His restoration shall be sooner than we think!

7 thoughts on “20 Jurists of the Roman Rota, when asked, refuse to speak about Papal renunciations”