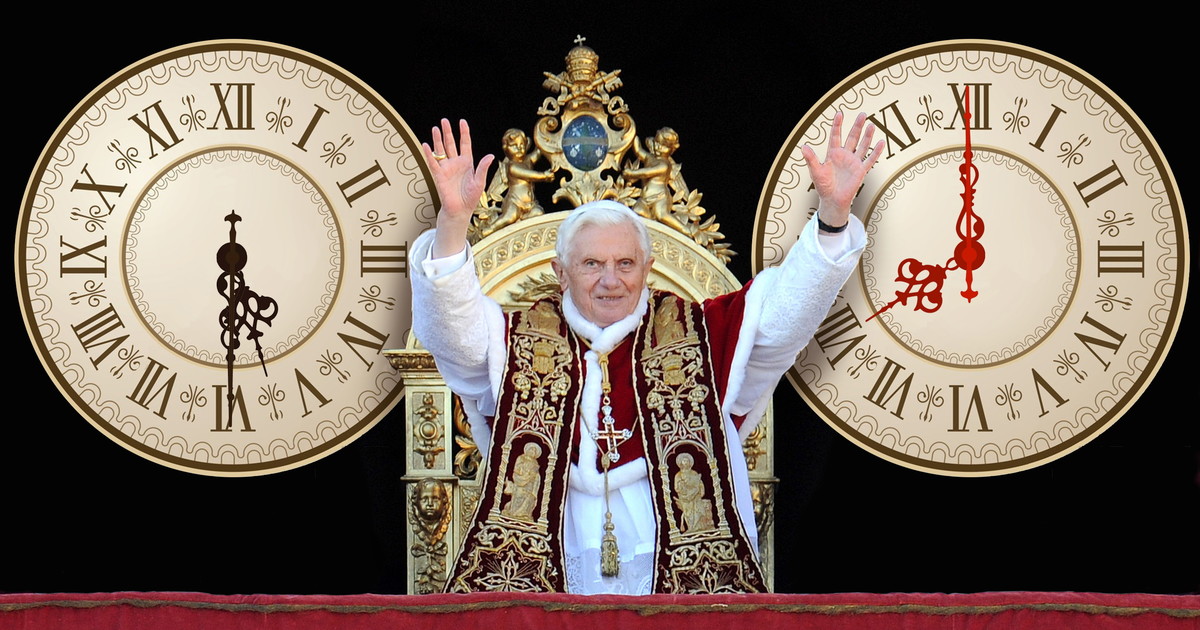 March 20, 2021 A. D.: On the Spring Equinox, as the globe of the Earth stands upright against the ecliptic plane, and Spring is tolled into being by the great machinery of the Cosmic clockwork, it behooves the world to consider in its historical context the art with which Benedict XVI studied to overthrow the enemies of the Church.

I speak of the Vicar of Christ, who in his duty as the Servant of the Servants of God, is truly a Time Lord, ministering on the highest spiritual plane, in the celestial Court of Time’s Author.

This meditation is urged tonight, here at Rome, with the publication of Andrea Cionci’s decoding of the event, which was acted out on Feb. 28, 2013, in Pope Benedict XVI’s last public act: his Congedo, or Final Salute, from the Balcony of Castle Gandolfo, at 5:30 pm of that year.

The article is entitled “Perché Benedetto ‘salutò’ il mondo alle 17:30: dimissioni annunciate, ma non confermate”, which in English would be, “Why Benedict said “Farewell!” to the World at 5:30 P.M.: A Resignation announced, but never made firm.”

In his article, Dr. Cionci cites Dr. Carlo Maria Pace, a physicist who holds a doctorate in theology from Rome, who was the first to focus on this event in his book published in 2017, entitled, “Il vero papa è ancora Benedetto XVI!”, that is, “The true pope is still Benedict XVI”.

The thesis of Dr. Pace was one I was made aware of early, and which like many, I dismissed for the utter simplicity and honesty of it, since like a piece of a puzzle, which makes no sense, without knowing it is such and is only part of a large masterpiece which has been deliberately cut into cryptic pieces, the real value of what Benedict did in February of 2013 is rejected on first sight to the unwise.

Pope Benedict XVI announced on Feb. 11, 2013 a renunciation of ministry, but on Feb. 28, 2013 he never actually renounced even that. This is why in May of 2016, Archbishop Ganswein said at the Gregorian University that Benedict XVI still shares in the Petrine munus and the Petrine ministry. And why for 8 years he keeps saying, that the Pope is one!, but never names Bergoglio as that man.

So on Feb. 28, 2013, ast 5:30 PM after flying to Castle Gandolfo on the official Military Grade Helicopter of the Italian Airforce, which by law carries the Roman Pontiff around Italy when he travels, He flew with 19 news agencies covering the flight step by step, to the official Papal Summer Residence — not his private house as Joseph Ratzinger — and came out on the Balcony and said these stunning words:

“You understand that this My day is diverse from the preceding ones. I am no longer the Supreme Pontiff of the Catholic Church — until 8 P. M. I am still, then no more.”

To the crowds who only wanted the experience of the entire pomp and show, what the Holy Father did was not obvious. He then went inside the Papal Palace and that was the last the public saw of him that evening.

But as I was watching intently on the TV the very event and even the flight, as it traced a line in the sky, which I could see from my residence on the southern outskirts of Rome, in that year, I was for about 15 minutes put into the greatest distemper, because I understood immediately that these words meant that he was still the pope, and had not resigned. — To those neighbors who invited me to watch their TV, I said clearly:  What? That is not a resignation. If he does not come back out on the Balcony and say something, he is still the pope. When is he coming back out?

He never did come back out.

I calmed myself with the thought that perhaps the next day it would be announced that he signed an act of renunciation before some small group of Cardinals.

But no notice was ever given.

And on Dec. 11, 2019, when I met with Mons. Arrieta, of the Pontifical Council of Legal Texts, I asked him if such an act was ever done.  And said, “Not to my knowledge”.

And so the great clock of the Vatican moved on, and the Cardinals ignored what Benedict XVI had not done, and entered into conclave 3 days later and “elected” and Antipope.

The rest is history. But the Lord of the moment was Benedict.

He had affirmed that from Feb. 11, 2013, til that moment, he was still the Pope. And by not renouncing the Petrine MInistry or Munus that evening, that He would still be the pope.

He pulled the papal wool over the eyes of the Masonic World, like an old man who is demanded to render his inheritance to an ungrateful son, and says only, I will do it, I will do it, but never signs the papers.

According to Canon 332 §2, a pope resigns only when he makes a verbal act of renunciation of the Petrine Munus, the Office or Charge, which Christ bestowed upon him the day he gave his “Yes” to become pope, when he was elected.

But as Pope Benedict XVI clearly told us, the day before this great act of Fare You Well!, “My yes is a yes forever!” — That is, “I have no intention of ever resigning.”

Surely there was time for some Cardinal to correct him, but none succeeded, if they tried. And that is because Benedict XVI knew what he was doing and not doing, and refused to change course, hiding in the dotage of an old man, about to die.

A man who has lived on for another 8 years, with the full use of his faculties. And who brilliantly maneuvered so an entirely corrupt Vatican apparatus could not and would not force him to participate in their corruption from that date unto today.

Here is a great man, who with a few words said and left unsaid, has stopped the world, like a master watchmaker working on the Celestial Clock, or a Lord of Time, in the TV series, Doctor Who, in the Palace of the Time Lords, put a stop to time itself, so as to undo the malign plans of an evil Cardinal, which were hatched centuries ago, and could not be stopped by normal means in time, since they were recognized too late, to take action.