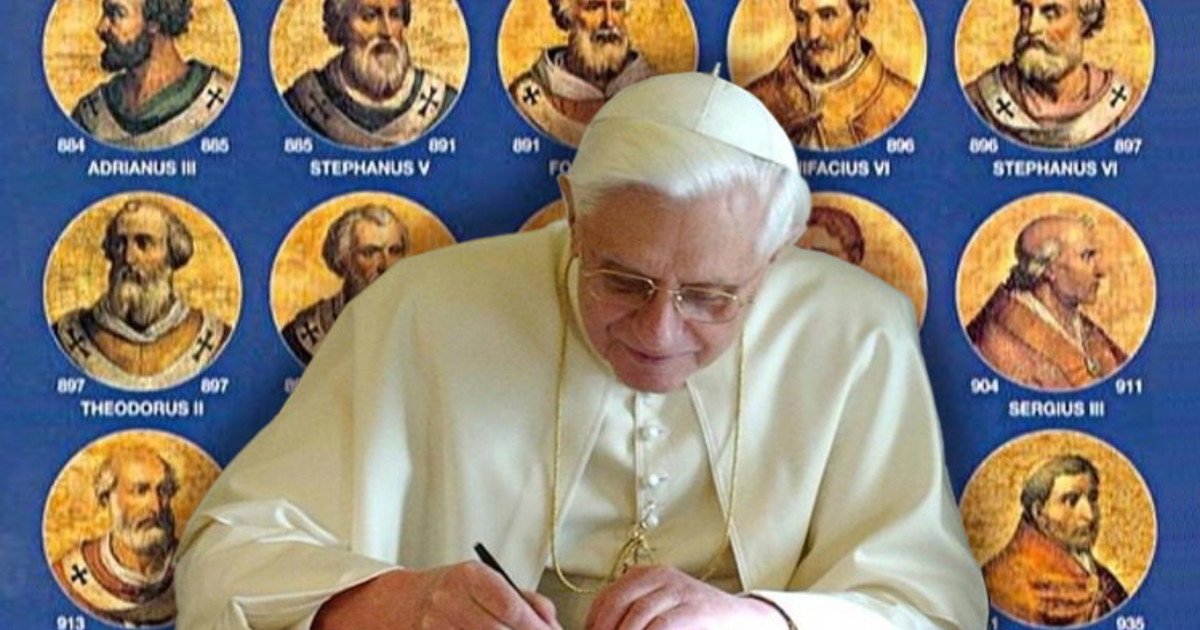 After five years we have understood a veiled but unequivocal message from Pope Benedict XVI.

We had already written about his strange, inexplicable Latin errors in the Declaratio of “resignation” of February 11, 2013, HERE , complete with a typo in the time (29.00). Errors then corrected in front of the whole world by distinguished philologists, but with Ratzinger who three years later says he is an excellent Latinist in the Corriere della Sera, HERE .

Inconsistencies so serious that according to various scholars, including theologians, Latinists and jurists HERE and HERE , these are NOT accidental errors, but made on purpose to draw attention to invalid resignation, which was only announced and never ratified HERE .

However, if the errors in Latin still leave some room for uncertainty, an error in history seems not to.

On February 22, the writer, browsing through “Last Conversations” (Garzanti 2016) book-interview by Peter Seewald to Benedict XVI, noticed a few lines.

The journalist asks the Holy Father, “With you, for the first time in the history of the Church, a pontiff in the full and effective exercise of his functions has resigned from his “office.” Was there an inner conflict over the decision?”

Benedict replied, cryptically, “It’s not that simple, naturally. No pope has resigned for a thousand years, and even in the first millennium this was an exception.”

Intrigued by the answer, we went to check the texts of Church history….

Thus, Ratzinger’s statement “No pope has resigned for a thousand years” makes no sense. At least, if we understand “resign” as “resigning from the papal office (munus),” legally abandoning the throne of Peter.

In fact, Benedict had instead decided on a very special kind of “resignation,” and he immediately specified this to Seewald: “It’s not that simple, naturally.” That is: in the nature of things, the papal office is not “simple,” that is, it does not consist of a single, inseparable element.

In 1983, John Paul II presumably together with Card. Ratzinger (since he was already for two years Prefect of the Congregation for the Doctrine of the Faith and very close to Wojtyla), specified that the ecclesiastical office of the pope was made up of the munus (divine office) that contained the ministerium (practical exercise). Before, in order to resign, it was enough to say: “I renounce the office”. From ’83 onwards, instead, it is necessary to renounce the munus in order to make the ministerium fall, obviously, too.

And Ratzinger said he wanted to do the OPPOSITE: in the Declaratio of February 11, 2013, richly accompanied by typos and errors in Latin, he announced that he would renounce, on February 28, starting from 20.00, the ministerium, only the practical exercise of power, (to be the pope, then), but not the munus (the office, in fact, not to be the pope), HERE . And moreover, at 8pm, he did not sign or declare anything about it to ratify his announcement, HERE.

That Ratzinger, today, still remains the only pope (“The pope is only one” he has been repeating for eight years), he himself explains with a learned and precise historical reference.

When he says to Seewald “in the first millennium (of the papacy) this constituted an exception,” he is right. From 33 to 1033, there was indeed “an exception” in this sense: a pope who, oppressed by an antipope, for some time had to give up being pope, that is, renouncing the ministerium, without losing the munus, that is, remaining pope.

We had first thought of Pope Silverius, (480-537), but the most significant pope is proposed to us by the expert Latinist Friar Alexis Bugnolo and – surprise – IS ANOTHER BENEDICT, the Eighth, born Theophylactus of the counts of Tusculum.

In 1012, therefore, as Ratzinger says – not “1000 years earlier”, but in the “first millennium” of the Church, – according to the very shrewd use of his words in the temporal reference – Benedict VIII of Tusculum, just elected pope, was ousted by the antipope Gregory VI and forced to flee from Rome, leaving the ministerium in the hands of the opponent for a few months, until the Emperor Henry II did justice by expelling the antipope Gregory. Benedict VIII remained ALWAYS the pope.

In essence, Benedict XVI is telling us: in 2013 I “resigned” just as Pope Benedict VIII did, ceasing for a time to exercise practical power, because of the antipope.

But just as Benedict VIII always remained pope, so am I still pope. So, if someone else today exercises practical power in my place and proclaims himself pope, is that a … ?