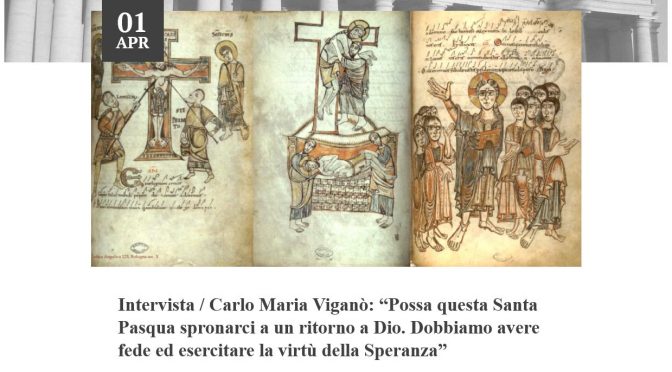 Good Friday — April, 2, 2021: In a wide ranging interview by Aldo Maria Valli, published yesterday, Archbishop Carlo Maria Viganò has openly conceded that the renunciation of Pope Benedict XVI might be invalid, and intentionally crafted for that purpose.

The comments of the Archbishop regard a question posed by Aldo Valli, in response to the crusade by Andrea Cionci of Il Libero here in Italy (see HERE), who has published numerous articles in March, of this year, exposing the invalidity of the Renunciation and the precise meaning of it in the mind and writings of His Holiness, Pope Benedict. In Cionci’s latest piece, he reports that the Secretary of State had approved the text of the Renunciation with all its errors!

Here is an English of the key passage in that interview:

Valli: You may have seen, Your Excellency, that again the question of “who is pope and who is not pope” has been brought up. Some say: since Bergoglio was elected on the basis of the maneuvers of the Mafia of St. Gallen and perhaps with irregularities during the Conclave, he is not pope. But Ratzinger would still be, who would have renounced the throne not freely, but because forced by strong pressure, and would have deliberately written incorrectly the Latin text of the renunciation to make it invalid. Church-Fiction? Or is there some element to be taken into serious consideration?

Viganò: Several causes – strong and undue pressures from outside the Church and from prominent members of the Hierarchy, as well as Joseph Ratzinger’s personal character – might have led Benedict XVI to formulate a declaration of renunciation in a totally unorthodox way, leaving the Church in a state of grave uncertainty and confusion; machinations of a group of progressive conspirators might have indicated in Bergoglio the candidate elected later during a conclave marked by violations of the Apostolic Constitution Universi Dominici Gregis that regulates the election of the Roman Pontiff: these elements might be such as to render Ratzinger’s abdication null and void, the Conclave of 2013 null and void, and the election of his successor. However, although widespread and undeniable, these elements require confirmation and above all a declaration by the supreme authority of the Church. Any pronouncement made by one who does not have the authority to do so would be reckless. I also believe that, at present, the dispute over who is the reigning Pope serves only to weaken the already fragmented healthy part of the ecclesial body, sowing division among the good.

Let us confidently pray to the Lord to bring the truth to light and show us the way forward. For now, strengthened by the virtue of Prudence that orders the means to the ultimate end, let us remain faithful and jealously guard what the Church has always believed: quod semper, quod ubique, quod ab omnibus creditum est.

To the Archbishop’s assertion that, “Any pronouncements made by one who does not have the authority to do so would be reckless”, I can only respond that, not only does every man by natural right have the authority to say munus does not equal ministerium, but every Catholic as a member of the Mystical Body of Christ knows that the only true and authentic unity of the Church is founded upon acknowledging the truth of things and of law, and not upon a political consensus!

But the Archbishop does point out, if in an obscure manner, that all roads now lead to another Synod of Sutri, to which all Catholics, but especially the faithful and clergy of the Diocese of Rome, have a right to ask to be convened and to have an official response.

Finally, however you regard the Archbishop’s position, his statements will leave ever honest Catholic the opportunity to at last put to rest and bury the “Bergoglio is certainly the pope” narrative, pushed by the controlled Catholic traddie media, so shamelessly and with so many fraudulent claims, arguments, reasons, during the past 5 years.