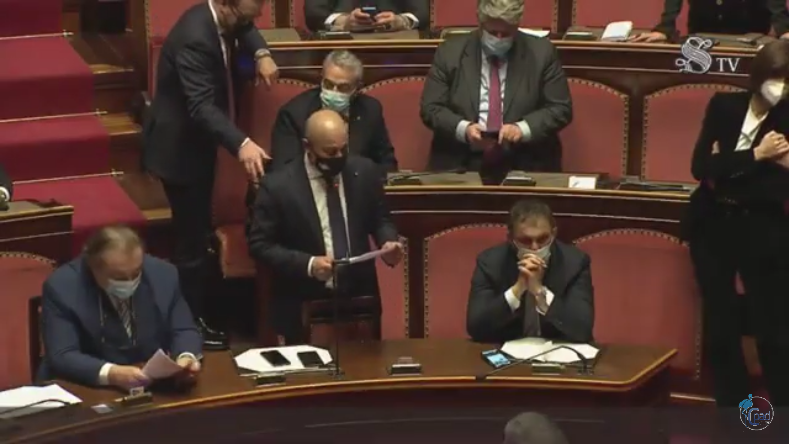 The recent decree of Mario Draghi — former Goldman Sachs investment agent — is the straw which has broken the back of compliance in Italy. A decisive slice of Italian society has now opened their eyes to the Pandemic and seen it for what it is: an invented excuse for the enslavement of humanity.

The indications for this are found everywhere. As an anthropologist-journalist I will recount the variety of evidence which is mounting every day.

Four women are stopped by the Carabinieri for walking the streets without masks after midnight. They refuse to comply with orders and are each given 2 misdemeanors. The combined cost would be about 4000 euros. While they officers are writing up the complaints, one of the woman reasons with the police and explains that these controls are entirely unconstitutional, illegal and in humane.  —  In the end, the Carabinieri rip up their own police reports and let the woman go free and unmasked.

A group of youth, who have not been seen in a year, are found on the streets after midnight. One is wearing a mask. I greeted them the first time and told them all to stop wearing the mask since it is nothing but a sign of political submission to fraud. They greeted me with joy again last night, all without masks and at my urging promised to spread among the youth of the city the message of resistance to globalism. I told them that the globalists were trying to rob them of their youth. And they resoundingly agreed.

A woman is stopped at the train station for not wearing a mask. The two policemen threaten her with a massive fine. In the midst of her explanation why its all a big Scam, they decide to not fine her and one of the officers rips off his own mask in a sign of agreement!

I met another patriot a few days ago, and we got to talking about the horrible side effects of the vaccine.  She told me that 10 of her associates HAVE DIED days after taking it. Families are not taking the excuse that it is COVID related, and are suing the Government, the Hospitals, the Doctors and the Vaccine company: Pfizer.

After curfew more and more youth  can be found on the street. The Police see them and do nothing. Even businessmen are now letting patrons into their stores without masks.

Everyone is fed up the the fraud. And the new government decree which will mandate Vaccine passports has everyone talking about revolution. If Mario Draghi thinks he will escape Italy alive, I would urge him to board a plane for Goldman Sachs in New York City as soon as possible.

How I love Italians!

The U.S. State Department is clearly worried about the situation in Italy. So they just published on April 20, 2021 a level 4 warning to all U.S. Citizens telling them NOT to travel to Italy. They claim that it is because Covid-19 is endemic in Italy. But now you know the real reason.

CREDITS: The featured image is a screenshot of the official TV channel, Stv, of the Italian Senate in action. Paragone stands to denounce the borrowing of monies from the EU as a scam to destroy Italy.

2 thoughts on “The Globalists are losing their grip on Italy”