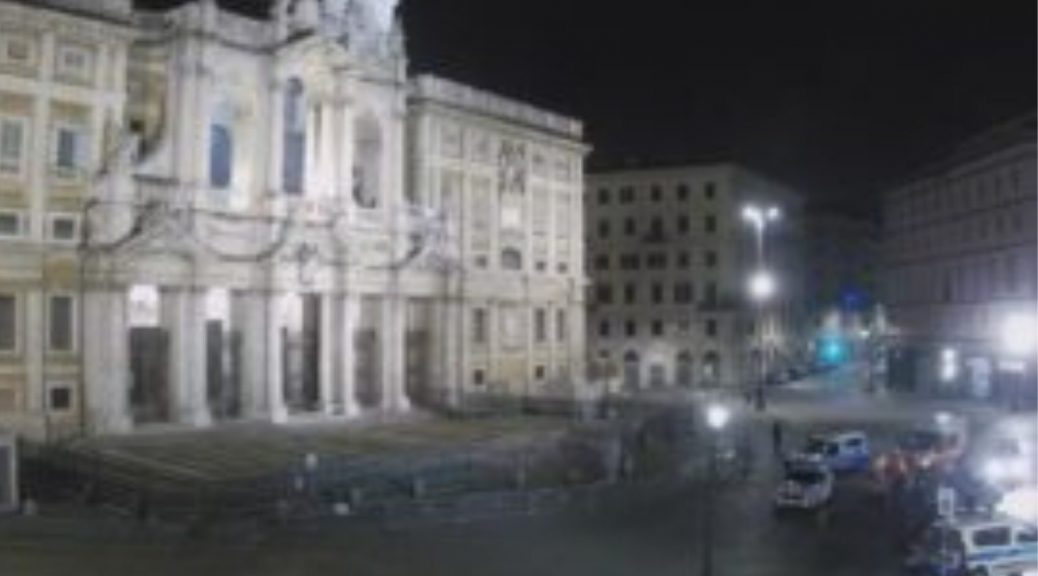 This article explains what happened to Br. Bugnolo in the early morning hours of May 1, 2021. An English translation will be forthcoming.

Here is the authorized English translation

At Rome, are holy men more frightening than devils?

For the original Italian article, click the image above.

Has Rome, the Eternal City, the Holy City, the city of Catholic Christianity, the open city, the city of “dolce vita” been transformed into a city of repression, curfew, degradation, where even praying becomes a crime?

This is the question that has been asked by all those who have become aware of the unfortunate and well-documented facts, but reported only on social media, thanks to the tireless effort of some bloggers and journalists, who wanted to give voice to those who do not have it, and for those have no longer a right to have it.

But let’s go in order.

Friar Alexis Bugnolo, Franciscan Hermit who made his canonical novitiate in 1992 by taking simple vows in 1993-1995, because of his love for St. Francis, chose in 1996 to observe the rule of St. Francis in the ancient way, without mitigation.

For several months now he has been going every evening at about 11:30 p.m. to pray in front of the closed door of the papal Archbasilica of Santa Maria Maggiore, known simply by the name of “La Basilica of Santa Maria Maggiore” or the “Basilica Liberiana”:  driven by his strong devotion to and inspiration by Our Lady, regardless of the questionable limits imposed by an incomprehensible and unmotivated curfew, which has lasted for more than a year now.

Faith and devotion have always defied every law, even putting their own lives at stake, so much so that Rome is also the city of Martyrs, the most representative of which is St. Peter.

According to his account, a good 16 months of constant and continuous prayer, of which everyone was aware and which the Police tolerated humanely and Christianly, knowing that a prayer in the open air would not have infected anyone.

It is true that from time to time some of the faithful, contravening the harsh law imposed and assuming all the risks involved in violating the norm, would stop to pray with Brother Alexis, and this continued until the night between April 30 and May 1.

Brother Alexis was there, as he was every evening, and had begun to recite his prayers in the company of some of the faithful, when a patrol of the City Police decided to intervene.

All lawful and in the norm — even the police have to do their duty, even when perhaps sent or commanded by someone who is annoyed that a friar can pray in the face of being charged with crimes of unimaginable danger.

The law is the law and while in the historic song by Fabrizio de Andrè “bocca di Rosa” (Rose’s mouth) the “Benemeriti” accompanied those who had broken the law, as told by the friar and some of the witnesses present, the treatment reserved by the representatives of the Order of Roma Capitale, seems to have been harsh and intimidating, so much so that six patrols and an ambulance intervened, all called, because afterthe friar was grabbed physically by the police on two occasions, he remained in great pain in the shoulder.

A long and meticulous story, which describes the entire phase that lasted until about 5.00 am, you can find it on all social networks where the Friar tells the facts, with great detail, to all those who wanted to interview him.

It would seem that what triggered all this was not the violation of curfew regulations, but even more trivially, the fact that the Friar did not wear a mask despite being in an open place, well spaced from the others, it seems that less than a dozen people were present, and in front of the churchyard of a Basilica, located in a large square.

Once released, it seems in the early hours of the morning, a tam-tam of news began to bounce on social media, in a strong way, as happens in these cases and that become increasingly frequent, amplified by the fact that this time the “criminal” was a hermit Friar.

We had already had documentation of parish priests interrupted “clumsily” by the Forces of Order, while they were officiating the Holy Mass, but certainly no one could expect that a Hermit Friar was not allowed to pray in front of a Church.

But Brother Alex Brugnolo does not fail in his duty to pray, so the next evening, not being able to pray in front of “his” Basilica of Santa Maria Maggiore, strangely kept dark outside and with the lights off, almost as if it could be a deterrent method, he moved to a church in the San Lorenzo area.

A prayer that gathered almost forty believers who, in spite of every disposition, wanted to testify their solidarity to the Friar for the violence suffered and to protest against the unfair disposition, as well as to express an act of faith, aware of the risks they could have run.

Are we perhaps returning to the origins of Christianity, when the faithful were forced to gather to pray in the Catacombs, of which Rome is full?

Is it really true, then, that Saints are scarier than Devils, because they bring people closer and unite them, contrary to what someone decided?

CREDITS:  The Featured Image above shows the Piazza di Santa Maria Maggiore in the wee hours of May, 1, 2021 A. D., with 12 police surrounding Br. Alexis Bugnolo, to arrest him for the crime of not presenting an Italian document to certify his identity, even though the Police were well informed that he had lost it months before, and was denied a new one on account of being too poor to have a rental contract whereby he could declare a legal residence according to Italian civil law.

7 thoughts on “At Rome, do Christians cause the Globalists more fear than devils?”