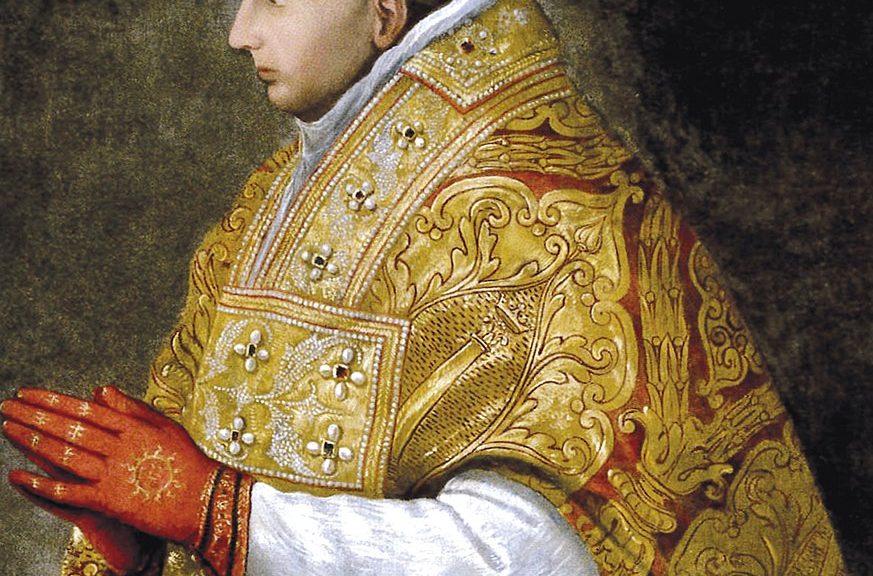 Or, Can I receive the Sacraments from Bergoglian clergy?

Those who hold fast to Bergoglio despite all the evidence to the contrary that he is not the pope have begun to circulate among Catholics vernacular snippets of copies of Pope Martin V’s Bull, Ad Evitanda Scandala, to as to convince them they can continue to receive the Sacraments from public heretics and schismatics on the grounds that these are not yet condemned by the Church.

This falsification of the teaching of Pope Martin V is diabolic.  And for that reason it merits to be refuted.

Who was Pope Martin V?

To understand the reason for the Papal Bull, let us first review the historical circumstances of its publication.

Pope Martin V was elected the successor of St. Peter at the Council of Constance on the Feast of St. Martin, November 11, 1417.   He was the first valid pope to be elected and to be recognized by the whole of Christendom since 1378.  His real name was Oddone Colonna, and yes he was a member of that famous Italian noble family.

Wikipedia recounts the basics of his career:

Oddone Colonna was born at Genazzano, the son of Agapito Colonna and Caterina Conti, between 26 January and 20 February, 1369.[2] He belonged to one of the oldest and most distinguished families of Rome. His brother Giordano became Prince of Salerno and Duke of Venosa, while his sister Paola was Lady of Piombino between 1441 and 1445.

Oddone studied law at the University of Pavia.[3] He became apostolic protonotary under Pope Urban VI (1378–1389), and was created Cardinal-Deacon of San Giorgio in Velabro by Pope Innocent VII in 1405.

In 1409 he took part in the Council of Pisa, and was one of the supporters of Antipope Alexander V. Later he confirmed his allegiance to Alexander’s successor, John XXIII, by whom his family obtained several privileges, while Oddone obtained for himself the vicariate of Todi, Orvieto, Perugia and Umbria. He was excommunicated for this in 1411 by Pope Gregory XII. Oddone was with John XXIII’s entourage at the Council of Constance and followed him in his escape at Schaffhausen on 21 March 1415. Later he returned to Constance and took part in the process leading to the deposition of John XXIII.[4]

So as we can see, before becoming Pope, Oddone Colonna was himself excommunicated by the true Roman Pontiff, Gregory XII precisely for the sin of communicating with an Antipope! Colonna for his part was little different from the pragmatically immoral nobility of his day, who changed sides at every moment to maintain or increase their patrimony or estate.

So two years after the death of Gregory XII, the Cardinals agreed to put their rivalries aside and elect the same man as Gregory’s successor.  And that was Martin V.  It was an obvious political compromise. As part of the deal, everyone agreed to absolve everyone else of any excommunication. The Hussites would go on to contest the validity of his election, but the Church has always regarded him as the true and valid successor of St. Peter.

The very next year, Oddone Colonna, now Pope Martin V, published the bull, Ad Evitanda Scandala, or “To avoid Scandals”.  Here is the Latin text, from a source which appears reliable:

Here is my own English translation, arranged in its proper hierarchical order of conditions:

To avoid scandals and many dangers, and to come to the aid of frightened consciences,

under the pretext of any sentences or ecclesiastical censure whatsoever, promulgated by law and/or man in general terms [generaliter],

be bound to abstain and/or avoid anyone or observe an ecclesiastical interdict:

2. unless the sentence and/or censure will be of this kind,

saving, if one in virtue of sacrilege and laying of hands upon a cleric was established to have fallen under a sentences imposed by a Canon notorious in this matter,

which fact could not be concealed by any subterfuge, nor be excused by any suffrage of right [iuris].

For from communion with the latter, though it be not denounced, We wish one to abstain, in accord with the canonical sanctions.

On the Misuse of the Papal Bull Ad Evitanda Scandala

The first thing to be noticed is that this Bull does NOT contain Magisterial teaching.  This I say to rebut the assertions stated by  John S. Daly in his article on the topic.

We can see clearly that it does not contain magisterial teaching because:

For this reasons, the teaching of Vatican I obliges us gravely in conscience to not hold this teaching as infallible, since it does not meet the criterion of a papal teaching which is ex cathedra.

What then is its canonical value.  A papal indulgence or favor, in written form, holds value so long as another Pope does not overturn it with another decision.  This was done substantially by the Holy Office, as John Daly mentions above, and officially and legally in the codes of Canon Law of 1917, which abolished all previous grants of indulgences, and 1983 which declared excommunicate ipso fato latae senentiae all heretics, schismatics and apostates, making it obligatory to regard them outside the communion of the Church by the mere fact of there sin. — A most solid moral principle, which aligns canon law again with the revealed teaching of God in Scripture, taught in many places (e. g. Maccabees and by Our Lord in Matthew 10:32.

So no appeal can be made to it today as having any force of law or to obtain any claim to action on the part of the faithful.

Martin V was the first pope in nearly 40 years to be commonly accepted by the whole Church. The Great Western Schism which began when Cardinals decided to lie about who was the real pope, and elected another, was a horrible tragedy for the Church. Countless souls were deceived about who was the true Pope and died in communion with an antipope.  Both rival parties, however, were perfectly Catholic, in that they taught no false doctrines, so in this Schism there was no question of conscience over communion with heretics. It was only a papal schism.

Therefore, it is very wrong to suppose that Martin V was referring to the precise circumstances of our day or had granted an indulgence or teaching which Catholics can make use of today, or appeal to today, in the present crisis. Indeed, in an age in which for nearly 40 years excommunications had been leveled on all sides like water, as it where, the Bull of Martin V was a good pastoral approach to heal troubled and wounded souls, after so many years of strife. This was especially necessary for the Faithful who traveled to those parts of Europe where just a few years before all were regarded to be excommunicated by the pope, to whose allegiance they belonged.

On the Use of the Papal Bull Ad Evitanda Scandala

Since the act is not a magisterial teaching protected from error, we cannot rely on this document to discern any true guidance today for souls or consciences.

Indeed, by expressly not granting his indulgence to the case of communing with someone who had laid hands on a cleric in a sacrilegious manner, Martin V showed that it was not his intention to grant his indulgence when it would be consenting to a crime after the fact, which is clearly immoral.  From this we can deduce the mind of the Pontiff, namely, that it was not his intention to grant permission to do anything sinful.  And from this we can conclude, that the cases which he refers to, namely CONDEMNATIONS IN GENERAL TERMS, refer only to those sentences which were vague.  And this concurs with the general principles of right.

However, the indulgence of the Pope no where speaks of the obligation of every Catholic to never act contrary to his knowledge (conscientia) of the truth. In fact, the expressed exception to his indulgence, at the end, shows us that Martin V did not want his grant of favor extended to cases in which the conscience of the faithful was obliged to act.

But this is precisely the case today with Catholics who know Bergoglio professes heresies and no religion, or that Benedict XVI’s did not renounce his office, only his ministry.

Therefore, those who share this papal bull to convince others to keep receiving the Sacraments from Bergoglians are clearly misrepresenting it according to its nature of authority, its form of words, its historical context and its canonical value.