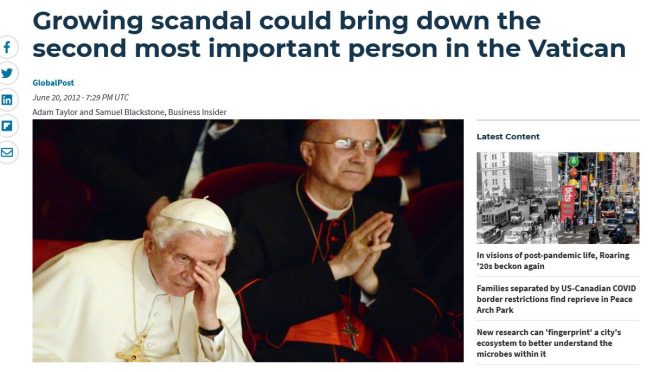 There were many scandals at the Vatican during the first 8 years of Pope Benedict XV’s Pontificate, which the international press spoke of. Some even involved Cardinal Bertone (See here).

But one of which no one has spoken till now, regards a most heinous act of sacrilege against the sacred person of Christ’s Vicar on Earth.  FromRome.Info can now reveal what is claimed to have happened based upon our sources at the Vatican.

Thereupon, Cardinal Bertone allegedly laid hands on the Holy Father, placing his right and left hand on the right and left upper arms of the Roman Pontiff.

You need to understand,
that it is I who command here!

This would be a most infamous act. Indeed, a physical assault upon the Holy Father is punishable by excommunication in canon 1370 §1:

1370, §1: He who uses physical violence against the Roman Pontiff incurs excommunication latae sententiae, reserved to the Apostolic See, according to which, if one deals with a cleric there can be adjoined, according to the gravity of the delict, further penality, not excluding de-mission from the clerical state.

That such a crime might have been quietly endured by the Holy Father shows his heroic meekness.

That such a crime has heretofore never been revealed to the press, shows, possibly, how absolutely corrupt and heartless the culture at the Vatican is.

Now, at last it seems to become more clear to what extent Pope Benedict XVI was being threatened and manipulated during the first years of his pontificate.  Perhaps, now, the objective observer will begin to examine more closely how in the last 8 years, the Holy Father might have been deprived of his liberty of action.

Indeed, not a few Vatican functionaries have reported that they have received “letters” from the Holy Father since Feb. 2013, which do not appear to be written by the same personality they know. Some of these are signed with the name of Benedict, in a hand writting which appears to be executed under extreme duress.

Let us pray for our Holy Father. I think none of us yet understands under what kind of pressure and threats by corrupt officials and Freemasons he has lived for so long!

Finally, FromRome.info calls upon the international press to interview Vatican Officials for further elucidatations and confirmations of this story.

CREDITS: The featured image is a screen shot from the article cited above.