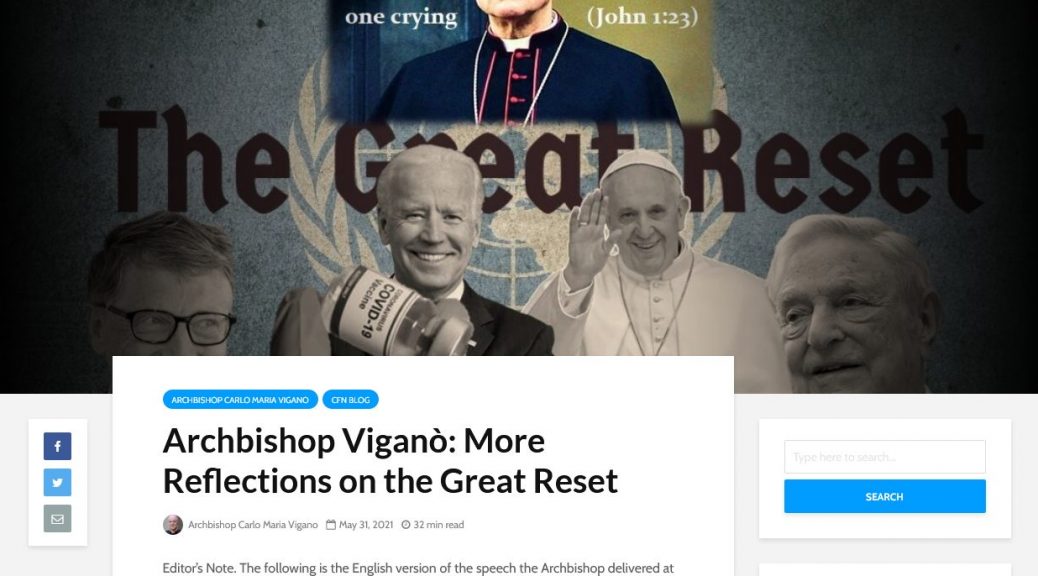 June 1, 2021 — Archbishop Carlo Maria Viganò has given a remarkably complete critique of the Great Reset during his recent talk at a Venice Conference on the matter, hosted by the Italian Philosopher Francesco Lamendola.*  The talk in Italian was recently translated into English and has been published by Catholic Family News. You can read it here.

There is no denying that Archbishop Viganò has been the instrumental cause of many Catholics who hold fast to Bergoglio to begin to doubt, criticize and oppose the Great Reset.

So much have these Catholics been intellectually and morally part of the system of control or under that system of control, that the exclamations of the Archbishop in these weeks are met with acclamation which a true leader on the issue would merit.

They call the Archbishop a “voice in the wilderness” or “the only one who is speaking the truth”, or the “only Bishop who is denouncing the Great Reset”.

For those who do not know what has been going on for the last 18 months, because they have not been zealous to follow the news from trusted sources, but rather have been zealous to buckle down and comply with their Bergoglian Bishop and Globalist political leaders, such acclamations have their sense.

But the truth is that Archbishop Viganò is a Johnny come lately, and he has not yet even changed sides in this battle.

Indeed, the Archbishop has not only made some questionable alliances with arguably Masonic entities, but still refuses obedience to the norms of Canon Law regarding who is and who is not the Pope, preferring to sustain the party of the Globalist Bergoglio, against the Catholic Benedict XVI.

First, the Archbishop undertook a public media campaign which was a “touch all the bases and return home” strategy which is the hallmark of self serving politicians. According to this strategy, while not officially breaking from the ruling party, you speak and visit all the opposition to give them the false hope that you are now on their side, but in the end you return to stand at the right hand of the ruling elites.  The Archbishop did this in the summer of 2018, when he called Bergoglio to resign. But just this past Winter, Viganò insisted that Bergoglio is the Pope and it is divisive to question that!

To those who are really paying attention, the self-contradictions do not end there.

His writings in English are published by Angelico Press, notorious for promoting among Catholics spiritism and divination, the mixture of the occult into Christian Family life.

He wrote the political leader of the Skull and Bones Masonic Lodge Faction in the USA, Donald Trump, and was immediately accorded a personal recommendation by the President — a thing that no Catholic Bishop in U. S. history was ever accorded.

And he studiously refuses to speak in person or via correspondence with anyone versed in the canonical arguments that Benedict XVI is the true pope, despite the fact that Pope Benedict XVI is the one who drew him out of an obscure career in the Vatican Secretary of State to make him Secretary of the Vatican State Governorate and subsequently, Apostolic Nuncio to the United States, arguably the most important foreign post in the Vatican diplomatic staff.

He has repeatedly attacked and insulted not only the Catholic Church, blaming Her for sins, but also the Catholic Faithful for not opposing Vatican II.  In the first, he transgressed a rule of faith, whereby Catholic never attribute sin to the Bride of Christ. In the second, his comments are exceedingly cruel, seeing that the Catholic Faithful obediently accepted Vatican II precisely because of the actions and silence of the clergy, not excluding his own.  But both are remarkable forms of despicable clericalism which refuses to admit that the chief problem in the Church today is clerical corruption and chiefly in the Vatican, where he has worked for several decades.

To shout out a battle cry is a good an honorable thing, when you are standing on the right side of the Battle lines. But to do so, from the enemies’ Camp, is at least disingenuous, and at most a diabolic trick of deception to disarm your allies’ enemies.

The story has not ended, and is still in act. But those of us who are Catholics from the cradle and who know that sincerity only has value with fidelity, are finding it more and more incredible that Viganò’s words and actions remain in stark contradiction.

Credibility begins not with speaking, but with action. You have to switch sides in this war, and stand with Christ and His people, against the Globalists and the Bank of International Settlements, in Basel Switzerland, through which they rule the world.

*  Lamendola is a high school philosophy teacher, and a staunch denier that Benedict’s renunciation is invalid. He is known, during conferences with those who support Benedict, of intentionally talking as long as possible simply to prevent the supporters of Pope Benedict XVI from having any time to speak at all.

22 thoughts on “Viganò Gives Battle Cry against Great Reset, from the wrong side of the Lines”