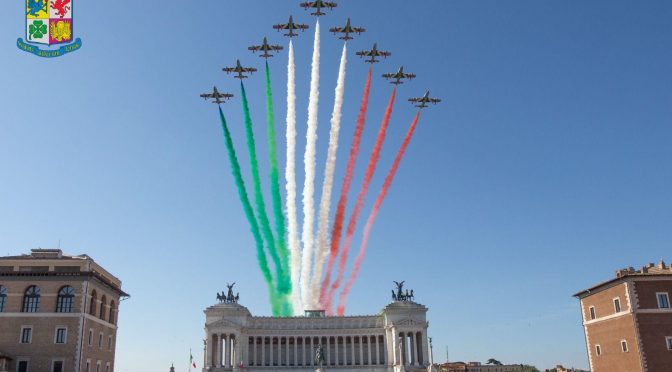 A DESULTORY DISQUISITION FOR THE 75 ANNIVERSARY OF THE ITALIAN REPUBLIC

June 2, 2021 A. D. — Today in Italy one is supposed to celebrate the 75th Anniversary of the Founding of the first Italian Republic. But as that entity no longer exists, there is a very subdued atmosphere here at Rome, under the Sanitary Dictatorship. There is talk that the prime Minister, Mario Draghi will aim to dump his technical Cabinet — as they call a comprise and compromised coalition government — and form a new one in July, with the intentions of calling snap elections in the Fall.  Draghi is by no means repentant for his part in pushing the Vaxx and Scamdemic, it is only that wanting as he does to be President of the Republic, he needs a Parliament which wants him as such, and thus wants to run ahead of and head off any popular movement which can take back control of the government, since, at present, the strict laws about qualifying for parliamentary elections make it impossible for any of the new political parties which oppose the Scamdemic able to field candidates in a snap election.

Meanwhile, his government has announced that we all need to prepare for the Next Pandemic. Evidently its arrival is no longer a matter of speculation, now it’s dogma!

So we are left with the Festival of a Dictatorship, put in place by a political class which has replaced representational government with a political oligarchy.  The situation is so dire, that with the Courts barely functioning and all the public prosecutors — without whom no criminal or civil case can be initiated — in the hands of that political class, that most Italians are entirely frustrated and in despair. From, that, they react in the only human way left, simply by not observing the laws.

Financial transactions off the books and not reported to the government have skyrocketed. As soon as Italians sense the other party is against the Scamdemic, accords are made outside of any governmental oversight.  The Government of Mario Draghi remains in control of the centers of power, but even here at Rome, the police, the carabinieri and the state police ignore the Sanitary laws, at all hours of the day, fining  no one for violations — unless you look at them in the wrong way or push the matter.

We have the People and an Anti-State, an organized criminal political class posing as our elected leaders, who are nothing of the kind in law or fact.

But we also now have an Anti-Church.  In the Church of the Antichrist, which has seized by a sort of snap diabolical conversion 100% of the churches in Italy, Our Lord is daily insulted to his face, by those who wear the mask of globalism in His very sight, pretending a trust in the TV and Government and despising the Healing and Living Power of Himself, God Almighty. In those Halls of infamy, the homilies are of the devil urging souls to take the death Vaxx, and alongside many of them there are death Vaxx centers, so that entering or leaving these synagogues of Satan, you can get the Vaxx, kiling your soul and risking your life for a lie.

But worse of all the Living God is, in these covens of iniquity, dropped in the hands of unbelievers like a cookie, and gobbled up by throats addicted to mortal sin, lies, fraud, disbelief and wilful intentional suicide by the death Vaxx.

The Catholics of Italy wander about without shepherds. We have only a few priests in the whole land, and the Holy Father, whether by Divine command, or diabolical illusion, or threats or fear, remains silent in the Monastery of the Mother of the Church, at the heart of the Vatican territory. Among us Catholics we incline to the theory that he is being held by force and deceit, but that view is not universal, nor quieting for our souls. Appeals to clergy from other parts of the world have fallen on deaf ears.  And I cannot express the sorrow of my own heart, having to tell so many faithful from all walks of life, that I know of no more priests to help them save their souls.

Thus we have a true Pope, who is 99% inert and an Anti-Pope who is intent on destroying as many souls possible each day.  Of this latter devil, several Catholic Bishops have called him the False Prophet, and an antichrist. A good number of clergy too, who out of cowardice name him in the Canon of the Mass in the place of the Holy Father, will admit that he is the False Prophet. But he keeps changing things, so that the Church and Anti-Church are divided on many levels: 2 Masses, 2 Our Fathers, 2 Codes of Canon law, 2 Disciplines of the Sacraments. It is not just the matter of whose name is named in the Canon!

Many believe we are at the end of days, in the Days of the Apocalypse, and if there are any inclined to believe otherwise, such as myself, I am daily finding less evidence and argument for my position.

On June 15, the Government begins obligatory vaccination of all medical workers. Only 20% of the population has been vaccinated, and the word is that the rest are firmly refusing. The GreenPassport is to go into effect, and technically you can no longer travel from Region to Region, or enter many public buildings or hotels without it, but I have heard no word that it will be implemented by anyone, since it is odious to the people.

The people are talking of fleeing the cities for the mountains or for some island, or for another nation, but no one knows where to go that will be safe, if they are even willing to break with all that is familiar simply to save their lives.

Here in Rome though all may seem normal and just like 2 years ago, except for the mask wearing, we are truly in a spiritual and psychological state of confusion, just as Bl. Anne Catherine Emmerich foretold 200 years ago: the city is without the Pope and we all wonder where he has gone. There is great strife and confusion, and days of terrible disorder and violence are surely to come.

Under the two Marios: Jorge Mario Bergoglio and Mario Draghi, Italy could not be in a worse state.

The few Catholics in the city which remain continue to implore Our Lady at midnight for deliverance, for there is no where else from which it appears to be found.

CREDITS: The featured image is c/o the Italian Airforce, which at noon today, traditionally, does a fly over the Monument of Vittore Emanuele, at the Piazza Venezia, here at Rome, while the President of the Republic lays a wreath on the tomb of the Unknown Soldier.