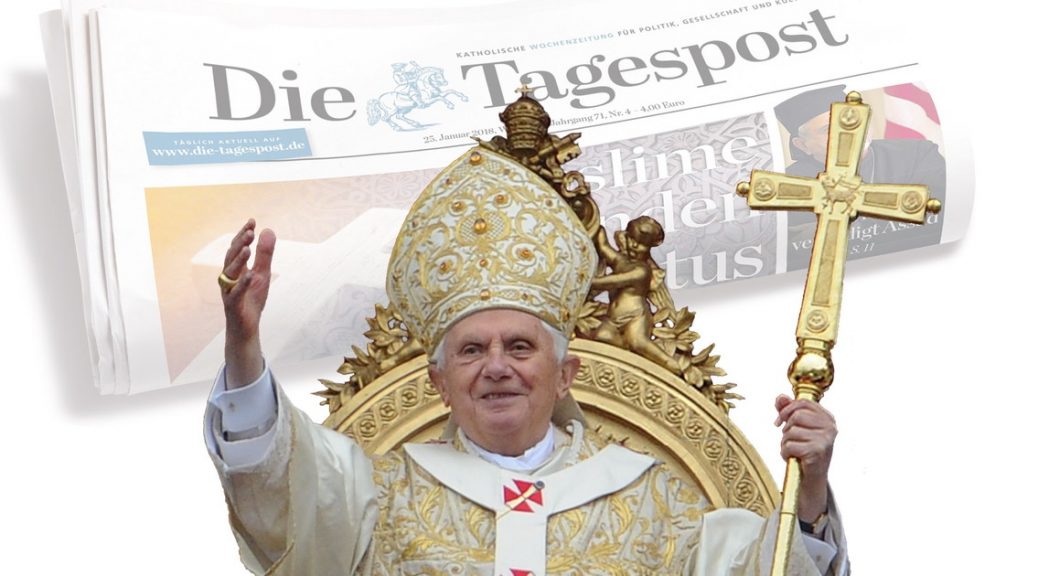 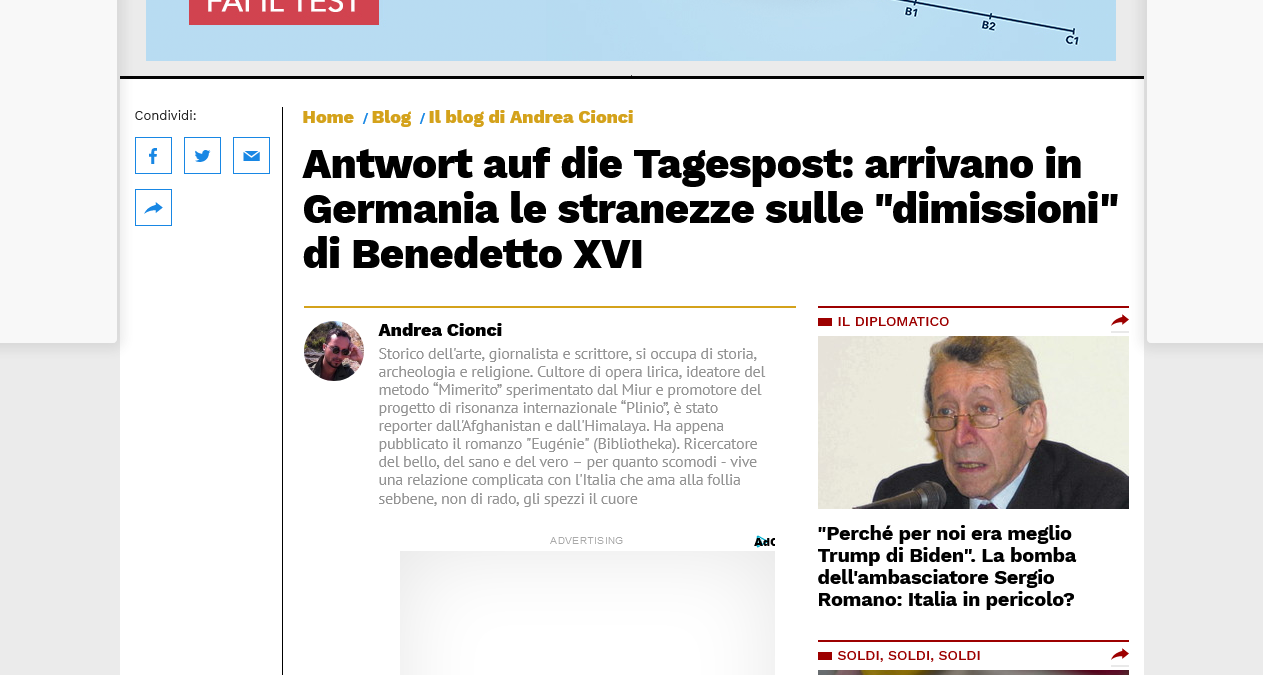 AUTHORIZED ENGLISH TRANSLATION
of the Italian Original linked above in image

The most important German Catholic daily, Die Tagespost, took up some of our articles about the legal problems of the resignation of Pope Benedict XVI and the strange inconsistencies of the following eight years. We have thus provided them with an account of the facts and a reconstruction that connects them (the so-called “Plan B”), translated into German. So far no one has been able to propose an alternative.

On May 28 you resumed on your pages an article published by the blog of the undersigned in the Italian newspaper, the Libero. Your title spoke of “strange speculations” in Rome. If you have the goodness to read, we will show you that some objective facts are rather strange. As for our reconstruction called “Plan B”, it tries to offer a possible logical explanation by rearranging facts and documents. It was taken up by the most authoritative Italian Vaticanistas and translated into four languages ​​by international websites and blogs (today also in German, for you). We would be pleased if someone proves capable of questioning it in a coherent way and complete after checking all the insights.

And here are the facts.

From the inversion between munus and ministerium, to the postponement of the date and time of the renunciation, to general doubts: according to various canonists, the renunciation is a completely void act. The mere fact that such disputes can flourish makes the act doubtful and as such, once again, null and void.

Benedict XVI has been repeating for eight years that “the pope is one” without ever explaining which one. I have shown that Vatican News attributed the quotation marks “the pope is one and he is Francis” to Benedict XVI while the words were written by the journalist Massimo Franco of Corriere della Sera.

Benedict XVI keeps the white robe and justified himself in Seewald’s book Last Conversations by saying that it was “a practical solution because he had no other clothes”. He maintains other pontifical prerogatives such as the P.P. after the pontifical name (Pater Patrum, or Pontifex Pontificum) and the possibility of imparting the apostolic blessing. He uses the majestic plural in his interview books. He lives in the Vatican and intervenes on serious doctrinal issues.

I highlighted how in his statements over the last eight years there is a scientific and studied ambiguity: each sentence of his can be interpreted in two different and mirroring ways. Like when he says: “My fans are sorry for my choice, but I am calm and at peace with myself”.

A sentence that can be interpreted in two different ways, also according to the hypothesis I will write about below.

In the Declaratio di Retirement there are two serious errors of Latin and about 20 other imperfections that were immediately denounced in the press by illustrious Latinists such as Luciano Canfora and Wilfried Stroh.

In 2016, Pope Ratzinger declared to Corriere della Sera what had already been written in Peter Seewald’s Last Conversations, namely that he himself wrote the Declaratio in Latin in two weeks because he is “very familiar with Latin and did not want to make mistakes by writing “. The document passed through the Secretariat of State under papal secret – writes Ratzinger – which also “perfected the style”.

The latest discovery is the one also cited by your newspaper, again in “Last Conversations” by Peter Seewald:

Question. “Was there an internal conflict over his decision (to resign)?”.

Response of Pope Ratzinger: “It is not that simple, of course. No pope resigned for a thousand years and even in the first millennium this was an exception: therefore a similar decision must be pondered for a long time. For me, however, it became so evident that there was no painful inner conflict “.

Now, six popes have abdicated in the first millennium, and four in the second millennium. How is it possible? Benedict XVI can therefore only refer with the word “resignation” only to those few popes who in the first millennium were forced to renounce not the Petrine munus, but only the ministerium, the practical exercise of power, for having been expelled by the antipopes. In this case, one of these could be Benedict VIII, expelled by the antipope Gregory VI and therefore temporarily forced to renounce the ministerium before being reinstated on the throne as a legitimate pope. In fact, Pope Ratzinger in the Declaratio renounces only the ministerium, and not the munus, as would be required by canon 332.2. So, he would be telling us that he is still the pope, even if he is without the practical exercise of power. No alternative explanations emerged.

The most important German Catholic daily, Die Tagespost, took up some of our articles about the legal problems of the resignation of Pope Benedict XVI and the strange inconsistencies of the following eight years. We have thus provided them with an account of the facts and a reconstruction that connects them (the so-called “Plan B”), translated into German. So far no one has been able to propose an alternative.

These are just a few facts, and you would be right to call them strange. How to explain them?

There are only two hypotheses:

1) Pope Ratzinger does not know Latin well, remembers nothing of the history of the Church and is practically fasting in canon law, although he was certainly aware of the fact that in 1983 John Paul II had inserted the dichotomy between munus and ministerium in canon law. Out of pure personal vanity, Benedict insists on wearing the white robe and posing as pope, no longer being pope, remaining completely indifferent to the anguish and doubt that grip so many faithful about who the pope is. It must also be admitted that Pope Ratzinger is also a little spiteful and “enjoys” leaving a shadow of doubt about who the pope is, hindering his successor.

2) As already mentioned by the jurist Estefania Acosta in his treatise “Benedict XVI: pope emeritus?” And by friar Alexis Bugnolo, the strange and illogical behavior of Benedict XVI over the next eight years is purposely held by him to make us understand that the pope is one and it is he alone, since he himself voluntarily prepared his resignation as legally invalid. This is to allow the modernist Church to reveal itself, to make itself known, but then to be canceled by a whisker, as soon as the invalidity of his renunciation is discovered. It is known that in 2012 he was now deprived of authority (so much so that the president of the IOR Ettore Gotti Tedeschi was expelled without the pope’s knowledge), it is known from the biography of Card. Danneels that his enemies were the cardinals of the Mafia of St. Gallen of which card. Bergoglio was the champion. According to the theory of the so-called “Plan B”, Benedict XVI has handed over to history and canon law an invalid renunciation to separate “the wheat from the chaff” and lead to a purifying schism for the Church. The Italian philosopher Giorgio Agamben says he is convinced that the real reason for his resignation was the desire to awaken the eschatological conscience. The resignation would be a foreshadowing of the separation between “Babylon” and “Jerusalem” in the Church. Instead of engaging in the logic of maintaining power, with his resignation from office, Ratzinger would have emphasized his spiritual authority, thus contributing to his strengthening. Now we just have to see who will come out of the office.

A ground breaking thesis, we realize. Below we have sorted all the pieces of the puzzle from the very beginning. Each paragraph has an in-depth article to verify each issue. We wait for someone to know how to rearrange them in a different way, but the pieces will have to fit together well. It is in fact very difficult to argue that all of Ratzinger’s apparent clumsiness, carelessness, inconsistencies, which – coincidentally – all lead to the same point, (that is, that he still remained pope in all respects) are only the result of chance. It is a question of probability calculation.

We have no preconceived positions, we limit ourselves to rearranging the facts according to logic. It is up to you to judge and, if necessary, to usefully contest.

However, we cannot continue to pretend that the issue does not exist. If it were verified that Benedict did not validly renounce, the 2013 conclave would be invalid, Francis would be an anti-pope and all his succession line would be anti-popes, just as another anti-pope, Victor IV, succeeded the anti-pope Anacletus II, until St. Bernard of Clairvaux to put things right. So the Catholic Church would be gone forever, at least as we know it. The question is uncomfortable, we realize, in fact everyone runs away as soon as it is mentioned, but what serious journalist can take the responsibility of keeping silent in the face of such sensational, inexplicable evidence? Catholics still less, and clergymen are bound by an explicit canon to seek the truth and declare it.

We believe it is worth addressing the speech and clarifying it, also to protect the legitimacy of Francis and his successors. After all, what is there to fear if everything is in order?

FromRome.Info will publish the German version of Plan B, shortly.